Canada’s Finance Minister resigned Monday but claimed his decision had nothing to do with an ongoing charity scandal that has engulfed Prime Minister Justin Trudeau.

Amid calls from political opponents for his resignation, Canada’s finance minister did just that on Monday night. But the minister, Bill Morneau, insisted his decision to step down was not related to a conflict-of-interest scandal that has embroiled Prime Minister Justin Trudeau’s government…

Mr. Morneau and Mr. Trudeau have been under political fire for not removing themselves from the cabinet discussion when a substantial no-bid contract was awarded to a charity that had connections to both of their families. In Mr. Morneau’s case, his daughter has an administrative job with the group, to which he and his wife have been substantial donors…

When asked at a news conference if his decision to quit and not to seek re-election to Parliament had been related to the scandal over the charity contract, Mr. Moreau dismissed the idea. But he added, “I wish that, in hindsight, that we had done things differently around the WE Charity.”

Bill Morneau’s “resignation” is further proof of a government in chaos.

At a time when Canadians are worried about their health and their finances , Justin Trudeau’s government is so consumed by scandal that Trudeau has amputated his right hand to try and save himself. 1/3

From the Liberals' carbon tax, to their tax hikes on small businesses, to their massive deficit spending, Trudeau and Morneau's policies have hurt Canadians.

Scapegoating Morneau does not solve the problem. As long as Trudeau is Prime Minister, the corruption will continue. 3/3

The leader of Canada’s New Democratic Party said it looked like Morneau was being thrown under the bus to protect Trudeau.

Canadians need a government that is focussed on helping them

Not on their own scandals

In the middle of a financial crisis, Justin Trudeau has lost his Finance Minister

Every time he gets caught breaking ethics laws, he makes someone else take the heat

That’s actually a pretty pointed jab at Trudeau. Last year the Prime Minister was involved in a different scandal known as SNC-Lavalin. In that instance, two of his Ministers resigned while Trudeau maintained (contrary to the evidence) that he’d done nothing wrong.

The current scandal involves WE Charity, a group that had paid Trudeau’s mother more than $300,000 for speeches was recently given a no-bid contract from the government. After the scandal broke the contract was rescinded but the situation still stinks like corruption.

In addition to losing his Finance Minister Monday, Trudeau announced Tuesday that he was proroguing the current Parliamentary session, i.e. shutting it down for a month. Officially the reason is that Trudeau wants to reset the government with a new focus on the coronavirus, but his action also happens to shut down the ongoing investigation into the WE Charity scandal:

The move to “reset” the government because of Covid comes amid committee investigations into the WE charity affair, in which Trudeau and former finance minister Bill Morneau face accusations of an improper financial relationship with the international development organization. Both men have apologized for not recusing themselves amid apparent conflicts of interest.

Prorogation will suspend all government business, including the investigation…

“We are taking a moment to recognize that the throne speech we delivered eight months ago made no mention of Covid-19, had no conception of the reality we find ourselves in right now,” he told journalists in Ottawa.

The National Post points out that Trudeau could have held his “reset” speech in September by simply proroguing Parliament a day before the speech:

Trudeau could have waited to prorogue until a day before the throne speech. Instead, by proroguing now, Parliament will be suspended for more than a month.

A prorogation puts a stop to all ongoing parliamentary work, including on proposed legislation and any studies being done in committee. Three parliamentary committees — the finance, ethics, and government operations committees — had ongoing investigations into the WE Charity scandal that will be halted by the prorogation.

So there doesn’t seem to be any real reason for doing this now except to attempt to reset the scandal situation and shut down the investigations which would likely have generate headlines that were negative for Trudeau. The opposition parties are seeing this move for what it is.

Justin Trudeau amputated his right hand to try and save himself when he forced his Finance Minister to resign. Now he’s shutting down Parliament and locking out Opposition MPs to prevent us from holding him accountable and getting answers on his WE Scandal. 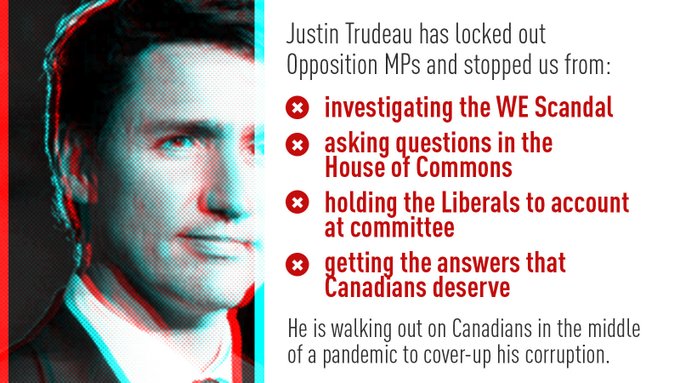 Shutting down parliament in the middle of a pandemic and an economic crisis, with a planned sitting next week and committees working hard to get answers and solutions for Canadians is wrong.

Canadians shouldn't be forced to pay the price for Mr. Trudeau's scandals.

Canadians deserve a government focussed on helping them, not a Harper-style tactic & coverup.

There’s also a hypocrisy angle here as Trudeau’s party apparently vowed not to use this tactic back in 2015. Here’s Trudeau being asked about his apparent hypocrisy yesterday. The way he stares into the camera and lies without shame reminds me of Bill Clinton in his prime.

2 posted on 08/19/2020 7:37:29 PM PDT by Pajamajan ( Pray for our nation. Thank the Lord for everything you have. Don't wait. Do it] today.)
[ Post Reply | Private Reply | To 1 | View Replies]
To: SeekAndFind
Trudeau announced Tuesday that he was proroguing the current Parliamentary session

Why the Hell does the Prime Minister have this power? Imagine President Nixon "proroguing" Congress during the Watergate scandal. Trudeau simply is barring Parliament from removing him. No country's executive should have that authority.

It’s the same with all leftist regimes.

Yeah but he's so good looking.

Will Matthew McConaughey play Justin in the “From Prime Minister to Prison” movie ,LOL

“The way he stares into the camera and lies without shame reminds me of Bill Clinton in his prime.”

Members of the Socialist Democrat Party = ALL cut from the same cloth!

But, Good Luck and Godspeed, Canada! The Clintons are BOTH still walking around FREE in America.

Expect ‘Justin’ to receive the same sort of ‘cover’ from the Puppet Masters that run YOUR Government!

Just not ready Trudeau has become a mirror image of the third world dictators he so glowing admires... And during this pandemic he is turning Canada into a third world country by handing out billions and bankrupting the country.

That’s bad enough on its own... Unfortunately, he is also using his position during a pandemic to enrich himself by handing out no bid contracts worth hundreds of millions to his friends and worshipers.

He’s violated every ethics rule in the book and has likely broken many laws while doing so... Sadly, Canada’s national police force is as political as he is and they will never investigate or charge him, his former finance minister or his current chief of staff for their corruption.... And all of this corruption during a pandemic, while he and his crew were already under investigation for corruption involving SNC Lavalin... The same construction company that attempted to extricate Muammar Gaddafi from Libya before he was executed.

Trudeau is a puppet controlled by his rich friends and sadly he is now avoiding scrutiny by proroguing parliament, which is essentially eliminating democratic rule until he decides it’s safe enough and the state controlled media has gone onto something else to pay attention to, other than his obvious corruption.

Never heard the word before.

It means he shutdown Canada’s Parliament. Imagine if the President had the power to shutdown Congress.

With the beard he really looks like his dad Fidel.

This clown has been one big wall-to-wall scandal since the day he took office.

But Canadians just keep on voting for him.

Yet Richard Nixon was a horrible, immoral fellow, eh, guys?

Prorouge means to stop or discontinue a session of Parliament.

Since the U.S. does not have the Parliamentary system most of us Americans are unfamiliar with the word.