There are new developments in the shooting case where a driver shot a protestor who was armed with an AK47 type rifle, as his car was being swarmed by the crowd of protestors. The following is a press release from the attorneys of Daniel Perry, who has identified himself as the driver who shot Garrett Foster on the evening of 25 July. This account tells what happened from the viewpoint of Daniel Perry. From the press release:

Daniel Perry is an active duty sergeant with the United States Army. He is a former Eagle Scout from the North Texas area and served our country proudly for the past eight years. Sgt. Perry served a tour in Afghanistan and has been the recipient of numerous army awards and commendations.

On the evening of July25, 2020, Sgt. Perry was in Austin, Texas driving for a ride share company in order to earn extra money. He had dropped his client off in the vicinity of Congress Avenue. He was then going to proceed to a “hot spot” in order to wait on notification to pick up another client or to pick up food for delivery. Sgt. Perry made a right onto Congress Avenue from Fourth Street and encountered a throng of people in the street. Prior to arriving at the corner of Fourth Street and Congress Avenue, Sgt. Perry did not know that a demonstration was taking place. 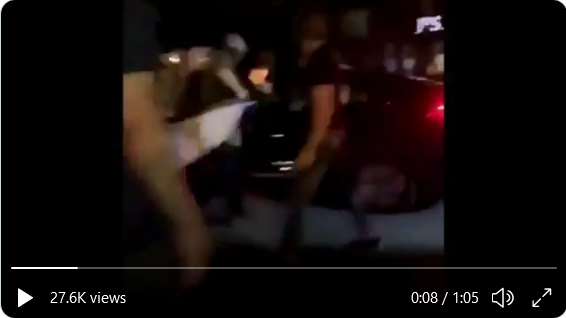 Yep. It was a good shoot.

No matter how this situation out, in my book Sgt. Perry is a hero..

It was an excellent shoot.

The driver is lucky this happened in Texas, self defense has been outlawed in other states.

Reginald Denny would approve this shoot.

8 posted on 08/07/2020 7:41:53 AM PDT by AndyJackson
[ Post Reply | Private Reply | To 1 | View Replies]
To: marktwain
It has now been confirmed by several witnesses that this individual with the assault rifle then began to raise the assault rifle toward Sgt. Perry.and

This language in the press release concerns me. It would be much better if they could have made an unequivocal statement that "he pointed the gun at" Sgt. Perry. Pointing a gun at someone under these conditions would constitute assault with a deadly weapon justifying deadly force in defense. If he only "began to raise a gun toward" someone it can easily be construed to mean that the gun was never actually pointed at anyone and may never have been.

Suppose you are legally protecting a group of peaceful demonstrators by holding your AK-47, pointed down and exercising proper trigger discipline, with your finger extended and off the trigger. Someone shoots you, claiming that you "began to raise the assault rifle toward" the shooter. This is how the media and left-wing prosecutors will portray it.

In my opinion, given all of the circumstances (including rioters swarming and beating on his car) it was justifiable defense, but I will not be on the Austin grand jury of hand picked Democrats that the far left-wing Austin DA will use to get an indictment or on the Austin jury of UT assistant professors and state employees that will hear the coming show trial.

Unfortunately, I think you are 100% accurate.

BTW, the current far left-wing Travis County (Austin) District Attorney Margaret Moore was just defeated in the the democrat primary by the even further far-left Soros funded candidate José Garza, who is almost certain to be the next D.A.

If you live in Travis County, be afraid. Be very afraid.

“The wave of criminal justice reforms sweeping the country since billionaire George Soros began pumping millions into district attorney elections was manifested last night in the massive win racked up by José Garza.

Early on he had a lead of 30,000 votes, causing incumbent District Attorney Margaret Moore to concede soon after those results were posted on the Travis County Clerk’s website.

• Real Justice PAC, whose declared purpose is to “elect prosecutors who will fix our broken criminal justice system”

• Texas Freedom Network PAC, which is involved in a variety of liberal issues but not specifically criminal justice

• Texas Justice & Safety PAC, which has received $652,000 from George Soros and $10,000 from the Jose Garza Campaign, according to Transparency USA.

• Workers Defense in Action PAC, whose goal is to elect progressive candidates that support a progressive pro-worker, pro-immigrant agenda.”

I wonder how George Soros would have reacted if they had surrounded his car?

Soros has had some of the best protection money can buy for decades.

You can bet his drivers are superbly trained to handle such situations.

It would be a very good bet the vehicles he uses are armored.