How Democrats Are Supporting Election Interference by Foreign Companies; Foreign companies who stand to lose if Trump wins are participating in an election interference boycott
Frontpage Mag ^ | 07/26/2020 | Daniel Greenfield

If you have Dove soap or Axe deodorant in your bathroom, Lipton tea or Breyers in your kitchen, you're buying Unilever products. The huge British-Dutch multinational made $60 billion last year and is known for its leftist politics. But Unilever may have gone beyond virtue signaling to election interference.

Unilever is one of the biggest foreign companies to join the Facebook boycott by leftist pressure groups.

The boycott’s goal is to suppress conservative speech on social media, especially by President Trump, before a presidential election, by convincing advertisers to withhold ads from Facebook until it complies. While Facebook already censors conservatives, it isn’t enough to satisfy the radicals running the boycott.

Rashad Robinson, the president of Color of Change, one of the leaders of the boycott made that clear in an editorial titled, "Will Zuckerberg dump Trump, or continue to serve him?"

"Facebook also loves its advertisers, and they are increasingly joining the boycott," he boasted. "So who will Zuckerberg choose?"

In an interview with the New York Times, Robinson emphasized that this was about the election.

"Honestly, there is an election and I need to get them to enforce the policies on the books before the fall. I need them to have some real rules around elections and voter suppression posts that actually will apply to Trump and other politicians so he doesn’t do anything dangerous on Election Day or before."

Robinson's examples of the kind of speech by President Trump that he wanted to pressure Facebook into censoring included, "claiming victory early".

The #StopHateForProfit campaign promoted by Color of Change, a radical leftist group, is blatant election interference. And it’s backed by huge foreign multinationals who are interfering in our election.

Unilever's own boycott post blatantly referenced the election, stating, "there is much more to be done, especially in the areas of divisiveness and hate speech during this polarized election period in the U.S".

A huge foreign company was pressuring Facebook to interfere in America's presidential election.

And it wasn't alone.

The Body Shop, a British company, also explicitly framed its boycott around the election, complaining that, "when we see the current dialogue in the US around anti-racism and equality, we continue to be concerned by the spread of hateful content and disinformation online, and the potential for this to affect the democratic right of Americans to have access to fair and balanced elections this fall."

Should foreign companies be allowed to intervene in an American election? Especially when that election has a potential impact on their bottom line?

Diageo, a British liquor company whose brands include Guinness, Johnnie Walker, Seagram’s, Captain Morgan, Smirnoff, and many others, announced that it would participate in the Facebook boycott while, continuing “to discuss with media partners how they will deal with unacceptable content."

The Trump administration has been considering new tariffs on European products from the UK, France, and Germany. The foreign firms joining the Facebook election interference boycott are primarily from these three countries. And, As Bloomberg noted, Diageo is one of the companies at risk if Trump strikes.

As is Pernod Ricard, the French company behind Absolut, Beefeater, Glenlivet, and Jameson, and which is also participating in the Facebook election interference boycott.

Some of the foreign companies that joined the #StopHateForProfit election interference campaign have direct or indirect financial interests that have been affected by Trump’s pro-American trade policies.

Honda had announced, “American Honda is withholding its advertising on Facebook and Instagram. We choose to stand with people united against hate and racism.” American Honda is just a subsidiary of the Japanese company. Its CEO, Shinji Aoyama, formerly headed the Asian Honda Motor Co.

The Japanese automaker has a direct financial stake in President Trump’s defeat.

The Trump administration had declared that car imports "threaten to impair the national security of the United States", and threatened to impose potential tariffs of 25%. After a trade deal, it appears that the Section 232 tariffs won't be imposed, but Honda's leadership is aware of the threat. And the Japanese company would be a lot safer if Trump were out of office. So would a lot of foreign companies.

Playstation, a Sony product, has announced its support for the #StopHateForProfit campaign. Another Japanese company, Konica Minolta, has also been listed as participating in the boycott.

Japanese companies should not be interfering in the next American presidential election.

Neither should German companies, especially those with a Nazi past, be lecturing Americans on racism.

Volkswagen, founded as a Nazi state-owned project dictated by Hitler which used slave labor during the war, issued an ultimatum, “Hate speech, discriminating comments and posts containing dangerous false information must not be published uncommented and must have consequences.”

That probably sounded a little less threatening and bellicose in the original German.

Much like Honda, Volkswagen has a stake in Trump’s defeat. President Trump has threatened to slap tariffs on European cars unless the EU drops its tariffs on American lobsters. A 25% tariff on European vehicles would add $10,000 to the cost of every car and hit German car companies really hard.

While VW is calling for “consequences”, the German company may be worrying about consequences.

Adidas and Puma, rival German companies founded by Adolf and Rudolf Dassler, members of the Nazi Party and suppliers to the Hitler Youth, who signed their letters Heil Hitler, joined the boycott.

Puma claimed to be, "part of an overall effort to create positive change and improvement in Facebook's platform by demanding the removal of inaccurate, hostile and harmful conversation," while Adidas called for, "a cosmopolitan and safe environment." VW and Puma had mentioned false or inaccurate comments which are euphemisms for censoring conservative political speech on social media.

Adidas and Puma neglected to sign off with the traditional “Heil Hitler” signature of their founders.

Foreign companies should not be joining a call by American leftist organizations to censor speech.

Henkel, the German company behind Persil, Dial, and Loctite, another former Nazi company that used slave labor, declared that it, "stands for tolerance, diversity and respect", and that it also expects "this attitude from all of our business partners around the world” as its reason for joining the boycott.

Next time you buy some Dial soap, think about where the German company really wants to stick it.

But it’s not just German companies.

The Lego Group, the Danish politically correct toy corporation, jumped on board the boycott, calling for an, "inclusive digital environment free from hate speech, discrimination and misinformation."

Lululemon, a Canadian company which got its name because its founder thought it would be funny to have Japanese people try to say it, and who endorsed child labor, claimed that it was, "actively engaging with Facebook to seek meaningful change." Perhaps it should start engaging with itself instead.

While Democrats have been clamoring about foreign election interference, the participation of foreign companies in a boycott meant to silence Republicans, has their universal approval and support.

"We share the concerns of companies who are speaking up about Facebook's inaction around making meaningful changes that protects our democracy," Biden's spokesman said.

House Speaker Nancy Pelosi went further, boosting the boycott even before it was officially announced.

“Advertisers have tremendous leverage,” she sneered. “I would say to them, know your power.”

Her comments, which came a day before the official election interference boycott, strongly suggest that she had early knowledge and may have been coordinating with the activists involved. The big question was whether Pelosi knew that the activists intended to involve foreign companies in their campaign.

If Pelosi knew, then the highest-ranking elected Democrat official was encouraging foreign election interference. And she should be held accountable for it just the way she wanted Trump to be.

Whatever Pelosi knew or didn’t know then, everyone now knows that foreign companies are participating in a campaign to shut down President Trump and his political supporters. This disturbing campaign of election interference has not been condemned by Democrats, only praised by them.

A foreign oligarchy has intervened in the 2020 election. The security of our political system must be protected by taking on this foreign election interference by foreign companies, some of whom may hope to profit from President Trump’s defeat, by sanctioning them for their attack on our system.

This is nothing new. It is an absolute fact that Saudi Arabia funneled billions to elect Obama and Clinton.

People from all over the world use their credit cards to illegally fund the Rat campaigns.

Nearly every single nation on planet earth feeds at the trough of the American consumer. China, France, Germany, Britain, etc. would collapse over night if the USA boycotted all THEIR products. We purchase everything from them and they purchase practically nothing from us.

For them, this election is a life and death matter. They know it, we know it. 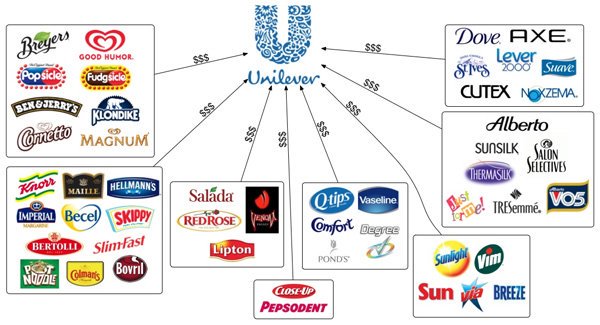 A Hitler of today would not have to fire one shot let alone have a military to try to take down the world. America has a very vulnerable Achilles heel.

They want Trump gone, and a return of low-tariff treason.

I only buy generic/local brands when I can.

The national name brands are funding the LEFT media and the marxist insurrection.

To get on or off the Greenfield ping list please FReepmail me.

I am posting Greenfield's articles from FrontPage and the Sultan Knish blog. FReepmail to get on or off the Greenfield ping list.

FrontPage is a basic resource for conservative thought. Lou

Nice to know the only things we have bought on this list is Q-tips.

And that, was a year ago.

10 posted on 07/26/2020 11:21:34 PM PDT by thingumbob (Antifa. Carrying on Hitler's legacy one beating at a time.)
[ Post Reply | Private Reply | To 3 | View Replies]
To: SeekAndFind
The boycott’s goal is to suppress conservative speech on social media, especially by President Trump...

The big, the powerful, the corrupt are standing against us... Not an easy time to be a conservative.

It’s not fascism when they do it...