May their shame be eternal.

To the hack journalists of the left who sold the lie, to the paid-off scientists who ran misleading studies, to the larger medical community that didn’t stand up for the genuine studies, to the fund-grubbing worms at the NIH, CDC, and WHO, specifically Tedros Ghebreyesus, PhD, and of course, to the biggest swindler of them all, Dr. Anthony Fauci, the ratface bastard who whored his considerable expertise to make money for his Big Pharma friends and grow his budget: may the world look upon you for what you are: scum.

The tawdry, malicious, partisan, anti-science subterfuge perpetrated by the left has run into a wall. A wall so thick that even purveyors of DNC narrative such as CNN have to admit it. Finally. Now that the race is 99% over and hundreds of thousands of dead bodies fill graves around the world:

Hydroxychloroquine works. The much maligned, 70 year-old antimalarial drug is highly effective in combating COVID-19. Just as CDMedia and a host of other voices have repeatedly proclaimed as early as March.

From the CNN article:

A team at Henry Ford Health System in Southeast Michigan said Thursday its study of 2,541 hospitalized patients found that those given hydroxychloroquine were much less likely to die.

Dr. Marcus Zervos, division head of infectious disease for Henry Ford Health System, said 26% of those not given hydroxychloroquine died, compared to 13% of those who got the drug. The team looked back at everyone treated in the hospital system since the first patient in March.

As horrifying as it was in the early days of the virus to see the good results and studies ignored–such as those by New York’s Dr. Vladimir “Zev” Zelenko and French virologist Didier Raoult, MD–it was even more maddening to watch the media swoon over every observational bit of data that confirmed their anti-Trump bias.

Laughable studies were cited by mass media, the charge led by media giant Bloomberg. Here’s the first, out of China, no less. This was the centerpiece in Bloomberg’s first anti-HCQ volley. No data, no dosage figures. Then came the infamous Veteran’s Administration study, in which elderly, mostly black veterans with multiple co-morbidities were given doses of HCQ and azithromycin. From a previous CDMedia article debunking the fraudulent study: 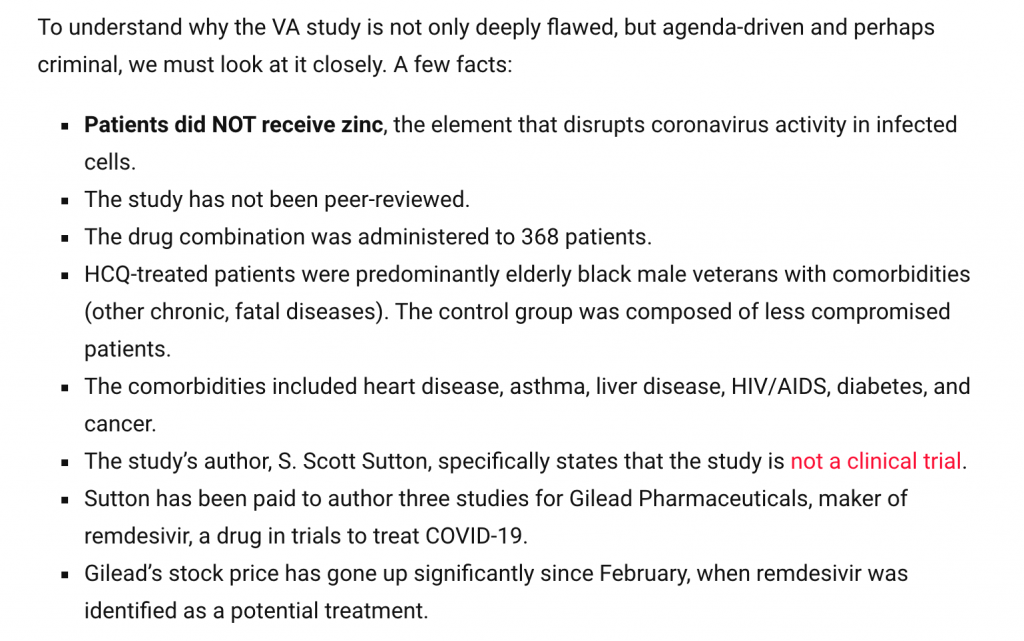 Sinking a promising old drug to create profit on a new drug is so rote for the NIH that they were lazy. They exposed their playbook for the world to see: pay off scientists to run bogus studies, release the findings to the media, and *poof*, the support for the old drug disappears.

Further, those who choose to fight on are branded as charlatans and quacks. Just ask Dr. Judy Mikovits of “Plandemic” fame. Mikovits learned firsthand what it meant to go against Fauci and the NIAID when it came to treatments for HIV/AIDS. Further, in a sinister corollary to HCQ for coronavirus, Mikovits was thwarted from using an old drug, Suramin, to treat autism, despite excellent results.

CDMedia first made the case for firing Fauci in May. His glaring dishonesty and abysmal record in predicting any aspect of the outbreak would be darkly comical if not for the considerable evidence that his effort wasn’t bungled, but thoroughly planned. The results have yielded great political damage for Trump, and great profits for Gilead.

The chickens have come home to roost, but the henhouse has long since burned down. No one cares about HCQ anymore, it’s old news. Treating the virus is so passé now. Vaccines are where it’s at.

Pass the baton to Bill Gates, Fauci. You’ve run your leg of this hideous relay.

Ping to you as per your request.

Hopefully public sentiment for Hydroxychloroquine-Zinc will build to a level that POTUS can direct his health officers to write an order allowing MDs to prescribe the Raoult-Zelenko regimen as both treatment and prophylactic in an outpatient setting.

The pandemic would be over in weeks.

The Henry Ford study analyzed the same type of patients that were studied in the Gilead trial that led to the remdesivir EUA in early May - hospitalized, with an oxygen requirement, but not in cytokine storm.

There were several prior remdesivir trials that also did not show a survival benefit - in fact, those trials led to a sharp fall in the Gilead stock price when they were disclosed.

The issue here - the ONLY issue - is that all clinical trials in March and early April, the Kaletra trials, the HCQ trials, the remdesivir trials - PRIORITIZED CRITICALLY ILL PATIENTS. This was perfectly understandable in the context of those times.

We now know that the terminal phase of COVID is an inflammatory and hematologic disorder. For all we know, the virus is gone by the time these events occur and they are mediated through the immune response, which is wiping out the virus and the lungs at the same time.

Bozo Parscale was tweeting the supposed big victory for us that the US guv had bought up so much Remdesivir.

Laura Ingram and her “medicine cabinet” of top notch physicians, have been debunking these frauds from the beginning.

There needs to be an oversight hearing of the fda and cdc with people being fired and/or going to jail.

Many of the same people that demand incontrovertible large-scale double-blind studies before hydroxychloroquine could even be *tried*, also demand *mandatory* mass masking in all public and semi-public settings. Where’s the *proof*?

Any MD can do that right now. All of those drugs are already approved, and can be "off-label" prescribed, without any approval note from POTUS or anyone.

Whether a particular doc is willing to do that is a different question, but it's not illegal in any way.

In America everything is political.


If Trump says this drug helps (based on what his advisors tell him), well then CNN automatically has to claim it doesn’t. So even a drug for sick people or a mask is - political.

Cows farting in America - political. Yes, in America a politician will throw herself in front of farting cows and claim she’s saving the world by making another law! https://thehill.com/homenews/house/431119-ocasio-cortez-explains-farting-cows-comment-weve-got-to-address-factory

9 times out of 10, the surprise is to liberals, not conservatives. “Surprise” is the introduction (and excuse) when our one-party press belatedly tells the truth.

How many have died because of the anti-Trump efforts to deny people HCQ? How many more will die?

Correct, but they don’t because they’ve been pussified.

Their mantra today is “First, Don’t Get Sued”.

The leftist media along with the Bill Gates eugenicist psychopaths have invested tons of time in building the narrative that HCQ doesn’t work, can kill you, Trump is wrong about it, and so on.

They have in effect smeared it and branded it as not to be embraced.

It will take more than just letting MDs prescribe it on their own. It will take Public Service Announcements and strong leadership to move the needle.

It isn’t 1980 anymore. CBS/CNN/NBC/ABC/PBS do not have the power to control the flow of information they once had.

The democrats should perhaps fear the wrath of Karen when she finally pulls her head out of the Whole Foods Market produce section and figures out she’s been lied too.

So has the FDA re-approved this drug for use with the Virus?

Have the democrat states now removed their executive orders barring its use for this virus?

The democrats will continue to use their power to murder.

That’s because for the Left, politics is their Religion.

Like many Religions they are determined to force it on you.

The State is their God, and they are determined to run the State.

Hopefully public sentiment for Hydroxychloroquine-Zinc will build to a level that POTUS can direct his health officers to write an order allowing MDs to prescribe the Raoult-Zelenko regimen as both treatment and prophylactic in an outpatient setting.

Totally true; indeed, that’s exactly why the DemonShits and their media accomplices so hate the hydroxy treatments. They desperately crave to do anything that will stop Trump. The COVID hysteria is the ideal thing because it’s shut down the great Trump rallies. Now, enter hydroxy, and there’s an effective, safe, cheap treatment for the disease that will make it no different than any other treatable disease, like flu, that can, and does, occasionally kill some people, but that’s no modern version of the Black Death. POOF! there goes all the justification for the lockdowns and other petty tyrannies that we’ve been harassed by, we can return to normal, the economy will start booming, and the Trump rallies will resume. IOW a total disaster for the DemonShits that they’ll do anything to prevent, including killing several thousand Americans.