How do you know if killing a baby in an abortion is “essential?” If the abortion clinic says so.

That’s akin to letting a rapist determine if his sexual assault truly constitutes rape, but it’s the decision U.S. District Court Judge Michael Barrett just issued in the dispute between the state of Ohio and abortion businesses over whether abortions are medically essential procedures.

Ohio is one of several states that included elective abortions in their bans on non-essential medical procedures during the global health crisis. The orders are meant to save lives by conserving medical resources and preventing further spread of the virus.

But Planned Parenthood and other abortion companies sued Ohio and Judge Barrett put the order on hold as it applied to them while he reviewed the case more fully. This afternoon, he released his decision, letting abortion centers themselves determine if they are in compliance with a legal order:

The decision let stand U.S. District Court Judge Michael R. Barrett’s order that says if “a health-care provider determines, on a case-by-case basis, that the surgical procedure is medically indicated and cannot be delayed, based on the timing of pre-viability or other medical conditions said procedure is determined legally essential to preserve a woman’s right to constitutionally protected access to abortions.”

Ohio Attorney General Dave Yost has already appealed Judge Barret’s temporary restraining order and his decision will be appealed as well. Yost and his office slammed the federal judge’s decision:

His office wrote, “If this Court declines to stay and reverse the District Court’s ruling, the people working hardest to save Ohioans from COVID-19 will die as a result. That is not an exaggeration. First responders and hospital personnel in Ohio face a critical shortage of “PPEs”—protective equipment needed to keep them from contracting and spreading the virus that causes COVID-19.

Yost’s team sharply criticized the abortion clinics for seeking a way around the health order.

The AG filed a notice that the state of Ohio will appeal the ruling by Judge Barrett to the U.S. Sixth Circuit Court of Appeals. Even though there is nothing essential about aborting an unborn baby, Ohio District Court Judge Michael Barrett ruled late Monday that closing abortion facilities would cause “irreparable harm” to women.

This statewide order, which was issued by the ODH’s Director Dr. Amy Acton, mandated that non-essential surgical procedures cease in light of the COVID-19 pandemic to conserve medical equipment in short supply. While the vast majority of Ohio’s medical professionals took immediate action to comply, abortion facilities across the state continued to perform surgical abortions.

However, Planned Parenthood and other abortion groups are suing to block these bans. Just hours after they filed the lawsuit, Barrett issued a two-week order blocking the state from enforcing the elective abortion ban, according to the report.

“The law is well-settled that women possess a fundamental constitutional right of access to abortions,” Barrett wrote in his ruling. “If a healthcare provider determines, on a case-by-case basis, that the surgical procedure is medically indicated and cannot be delayed, based on the timing of pre-viability or other medical conditions, said procedure is deemed legally essential to preserve a woman’s right to constitutionally protected access to abortions.”

REACH PRO-LIFE PEOPLE WORLDWIDE! Advertise with LifeNews to reach hundreds of thousands of pro-life readers every week. Contact us today.

Ohio Attorney General Dave Yost has announced that the state will appeal, a decision pro-life groups are applauding today.

“We thank Attorney General Yost for enforcing the law and ensuring that Planned Parenthood and their abortion allies are held to the same standard under the State’s Health Order that every other surgical facility is currently,” Stephanie Ranade Krider, Vice President of Ohio Right to Life, told LifeNews.com. “Regardless of how many times Planned Parenthood ignores the law and claims that they deserve special treatment under the Health Order- we know better. Abortion is not essential and these facilities’ blatant disregard for human life and safety during this crisis only serves to underline that fact.”

The order, which was given by ODH Director Dr. Amy Acton on March 17th, mandated that all non-essential surgical procedures be halted in order to preserve vital PPEs and reduce the spread of COVID-19. On March 20th, Ohio Right to Life sent a letter to the President of Planned Parenthood of Greater Ohio calling on them to close in compliance with the ODH’s Health Order. Soon after, Ohio Right to Life started a petition to urge the Ohio Department of Health to enforce the Health Order and hold Ohio’s surgical abortion facilities, including Planned Parenthood, accountable to the law. The petition now has over 800 signatures.

Even after receiving a cease and desist order from Ohio Attorney General Dave Yost sent March 20th these clinics remained open, going so far as to petition a federal judge to force the state to make an exception to the health order for all surgical abortions.

“Ohio Right to Life thanks pro-life Ohioans for their tireless advocacy on behalf of our society’s most vulnerable,” said Krider. “As Ohioans across our great state do their best to protect lives during this pandemic, we are thankful both to our attorney general and to Governor DeWine for their commitment to protect life and hold the abortion industry accountable. Countless lives will be saved thanks to their actions.”

“The point of the order was to stop the spread of the deadly virus and ensure there would be (personal protective equipment) for the protection for our first responders and health-care workers, which would in turn slow the spread to the general population,” Keller said. “Yet this order remains unenforced while the number of COVID-19 cases in Ohio grows exponentially by the day.”

All Covid 19 patients are treated before any botched abortions that come in to the ER during this pandemic.

If the woman dies she dies waiting to be treated.

Operation Rescue recently received hundreds of official internal Ohio Department of Health documents describing conditions and violations at each abortion facility in Ohio. They paint an ugly picture of sloppy practices and unhealthful conditions that provide arguments for the closure of the remaining facilities in the interest of protecting women’s lives and health.
2 posted on 04/02/2020 5:46:42 PM PDT by \/\/ayne (I regret that I have but one subscription cancellation notice to give to my local newspaper.)
[ Post Reply | Private Reply | To 1 | View Replies]
To: Morgana

I guess then we all can determine whether or not we keep our businesses going.

If we deem them essential we apparently all have the power to do so.

These liberal judges have less sense than my dog. By this rationale, he should never convict a robber if that robber says his robbery was essential — to his well being. What an idiot this judge is. The day is long gone where judges are above criticism.

Well there you go. If you think your retail business is essential, it’s essential!

These judges reflect very, very poorly on legal education and the depth of legal thought in this country. It seems that Saul Goodman has more ethics.

God forgive for wishing this upon anyone.

Dorkbama pretend judge? (As if there is any other kind when it involves the great pretender.)

What if a fetus decides it wants to live?

Abortions are necessary, but cancer screenings are not.

In this case, perhaps not. If this is the guy, this is his previous job and the guy who put him into it.

Well, with Barack Hussein Obama's anti-BAIPA stance, the fetus is left to die, if it survives the first abortion attempt. So somebody made this, many years ago: 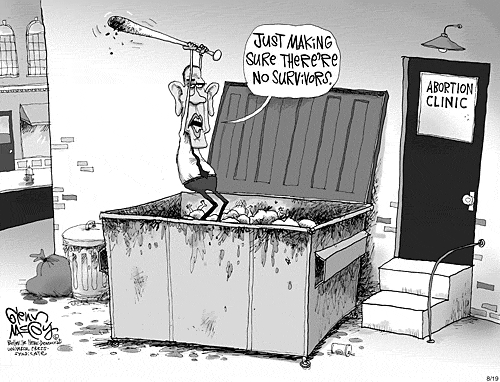 God says, “It’s never “essential” to kill a human being — including unborn babies.”

I hope for that judges sake he’s prepared to meet the real supreme judge. Just sayin’.

Send in the national Gard. Put up a tall fence around the clinic. No doors. Then tell them that they can remain open.