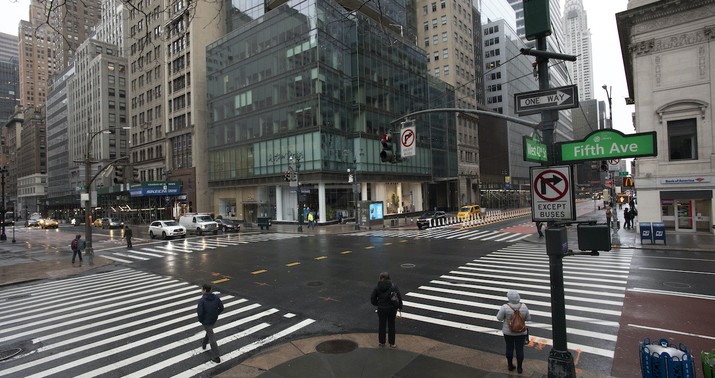 The city is already locked down, with residents asked to remain at home as much as possible per one of Andrew Cuomo’s orders a week ago.

What Tom Bossert has in mind is a lock-in. No one in or out, except suppliers. Wall the city off until the spread of infection there is under control, whenever that is. Otherwise we’re risking the same problem that the Chinese had in Wuhan, moving too slowly to restrict the outflow of people and allowing them to seed outbreaks elsewhere.

There are nearly 31,000 confirmed cases of COVID-19 in New York State as of this afternoon, roughly half of all confirmed cases in the United States. New York City has nearly 18,000, a higher number than all but six countries on Earth. Bossert’s ready to go nuclear:

2/ Cordon sanitaire of NYC and messaging and planning aggressively for the other hot spots about to jump into exponential growth (like it appears New Orleans might).

The feds may already be moving towards Bossert’s position. At yesterday’s briefing Deborah Birx recommended that anyone who’s left New York in the past 14 days should self-quarantine at their new location just in case they’ve brought COVID-19 with them. They’ve already seen outbreaks on Long Island which they believe were seeded by people traveling from the city. They must be considering the logical next step, especially with Trump complaining that the country needs to reopen for business soon.

There are reasons to think NYC will end up being America’s hottest hot spot, if not its only hot spot. Why? Density, for starters.

New York is both the country’s most populous city and its most densely populated. Vinetz said both the city’s high density and the fact that it is densely populated across a large region could be exacerbating factors. Vinetz also cited the city’s status as a hub for global travel as a factor that could be contributing to the outbreak there…

Indeed, interviews with New York residents and officials suggested that both the New York lifestyle — replete with shoulder-to-shoulder public transportation, frequent dining out because of the limits of apartment living, and reliance on crowded city parks for daily recreation — as well as a certain stubbornness in curbing it may have contributed to New York’s high infection rate.

“We’re used to the city being our living room,” said Michael Hendrix, director of state and local policy at conservative think tank the Manhattan Institute. “We have smaller living quarters; we live with roommates. We make this choice because New York City has so much to offer.”

New York is also cooler this time of year than many southern states are, which *may* be conducive to contagion in this case. In some ways it’s a perfect petri dish. Oh, and it also has an imbecile for a mayor, per this tweet from as recently as March 2:

Since I’m encouraging New Yorkers to go on with your lives + get out on the town despite Coronavirus, I thought I would offer some suggestions. Here’s the first: thru Thurs 3/5 go see “The Traitor” @FilmLinc. If “The Wire” was a true story + set in Italy, it would be this film.

Lots of major metropolises in the Far East, like Hong Kong, also have high density but don’t have morons in charge, so they’ve been spared an outbreak of NYC’s scale.

New Yorkers do have a weapon against the virus, though. They’re using it, and there’s some evidence that it’s working:

The governor cited Tuesday projections that showed a doubling of hospitalization numbers is expected to occur every 4.7 days, compared to a Sunday projection that had shown every two days.

“Now, that is almost too good to be true,” he said, adding that the data indicates about 15 percent of people who test positive need hospitalization.

Social distancing may be flattening the curve already. Checking the Kinsa “fever map,” I see that this trend (in Brooklyn) looks similar in the four other boroughs of New York City:

Because it takes several days for coronavirus infections to develop, it’ll take time for that trend to show up in a reduced patient load in city hospitals. People who were infected eight days ago, when the fever rate was still highly atypical, may only be starting to feel the effects now; it might be several more days still before they need hospital care. But if the Kinsa data is reflecting a drop in coronavirus transmission, presumably we’ll see hospital admissions start to slow down in, say, two weeks. Which is not to say they’ll slow to normal rates, of course. Even today, although the rate of fever has dropped, it’s still atypically high.

Here’s Scott Gottlieb talking about MASH units for the city.

“New York has another about 5 weeks to go for this … that they’re stretched right now is worrisome. What we need to be doing is developing mobile MASH units … moving all the resources we can into New York City,” @ScottGottliebMD on responding to the growing crisis in NY: pic.twitter.com/VfFwVG3rUL

As a Floridian, I want NYC LOCKED down! No one in. No one out. Too many of them come here. Only traffic allowed in/out of NYC is suppliers.

one more thing: make it permanent

Long overdue to lock that cesspool off.

The airports are still open - NYC is sheading virus all over the country. Shut it down now !

And Governor Cuomo has now DECREED (by what actual legal authority, I know not) that unless they are a part of an approved clinical trial, New Yorkers can no longer receive the highly promising 6-day course of the hydroxychloroquine & azithromycin drug regimen as treatment for Covid-19.

I wonder why Cuomo did that. Actually, I’m pretty certain I know. He fears that its success will QUICKLY become manifest!

I’ve a;ways thought of “Escape from New York” as an instruction manual! Build the wall!

weren’t they gonna build a gigantic seawall around the entire city to stop the ocean “rise” from “climate change”? too bad they never did that because it could be used to seal off the entire city ...

Do what they do in the movies, shut down the subways, els, tunnels, outgoing roads and bridges. I’ve seen it done in “The Taking of Pelham 1, 2, 3” (0n the other night), Batman movies, etc.

Yeah, DeBlasio is going to do that! Right! DeBlasion thinks “Subways” are places to get sub sandwiches.

NY State and City are both screwed. They are progressives and socialists who ironically depend greatly on the bubbles of the S&P500 and bond market (via taxes on a few dozen companies and oligarchs) to stay in power.

That can’t be Constitutional, to lock people in like that. Oh wait, it’s Noo Yawk? Never mind, when can we start?

It’s obvious that for whatever reason these people cannot control their own actions.

I do not know what it is, drug trade, prostitution, immigrants, religious, or whatever, it is at a point that this city, this state, needs to be blocked off from the rest of the country in order to stop a rapid uncontrolled spread throughout the nation.

Damn right!
Why isn’t the airport(s) shut down?
Same for S. California. imo

To all medical professionals around the world:

My name is Dr. Zev Zelenko and I practice medicine in Monroe, NY. For the last 16 years, I have cared for approximately 75% of the adult population of Kiryas Joel, which is a very close knit community of approximately 35,000 people in which the infection spread rapidly and unchecked prior to the imposition of social distancing.

As of today my team has tested approximately 200 people from this community for Covid-19, and 65% of the results have been positive. If extrapolated to the entire community, that means more than 20,000 people are infected at the present time. Of this group, I estimate that there are 1500 patients who are in the high-risk category (i.e. >60, immunocompromised, comorbidities, etc).

Given the urgency of the situation, I developed the following treatment protocol in the pre-hospital setting and have seen only positive results:

1. Any patient with shortness of breath regardless of age is treated.

2. Any patient in the high-risk category even with just mild symptoms is treated.

3. Young, healthy and low risk patients even with symptoms are not treated (unless their circumstances change and they fall into category 1 or 2).

My out-patient treatment regimen is as follows:

The rationale for my treatment plan is as follows. I combined the data available from China and South Korea with the recent study published from France (sites available on request). We know that hydroxychloroquine helps Zinc enter the cell. We know that Zinc slows viral replication within the cell. Regarding the use of azithromycin, I postulate it prevents secondary bacterial infections. These three drugs are well known and usually well tolerated, hence the risk to the patient is low.

Since last Thursday, my team has treated approximately 350 patients in Kiryas Joel and another 150 patients in other areas of New York with the above regimen.

Of this group and the information provided to me by affiliated medical teams, we have had ZERO deaths, ZERO hospitalizations, and ZERO intubations. In addition, I have not heard of any negative side effects other than approximately 10% of patients with temporary nausea and diarrhea.

In sum, my urgent recommendation is to initiate treatment in the outpatient setting as soon as possible in accordance with the above. Based on my direct experience, it prevents acute respiratory distress syndrome (ARDS), prevents the need for hospitalization and saves lives.

16 posted on 03/25/2020 10:06:49 PM PDT by Norski
[ Post Reply | Private Reply | To 1 | View Replies]
To: House Atreides
"And Governor Cuomo has now DECREED (by what actual legal authority, I know not) that unless they are a part of an approved clinical trial, New Yorkers can no longer receive the highly promising 6-day course of the hydroxychloroquine & azithromycin drug regimen as treatment for Covid-19."

Charge him with the unlicensed practice of medicine.

Protect the rest of the country from them so we can get back to normal lives.

But Miami/FtL is basically a borough of NYC.

Abutting Monroe County has barricaded its ONE highway in.

Visitors are directed to leave, hotels, parks and beaches shut down.