After months of hype and pseudo-drama ginned up by the left, public and secret testimony and breathless “smoking-gun” headlines, it’s taking the Senate just two weeks to bring an end, finally, to the impeachment circus. And it is ending with the always-inevitable acquittal of President Trump.

What a tragic, monumental waste of time it has been. After all, anyone capable of rudimentary arithmetic could have seen this foreordained outcome coming from Day One.

Indeed, it’s not entirely clear why House Speaker Nancy Pelosi, Senate Minority Leader Chuck Schumer and the rest of the leading luminaries of the Democratic Party even decided to embark upon this national exercise in political self-flagellation. Math is a stubborn thing, and Democrats constitute a Senate minority - a far cry from the two-thirds supermajority required for conviction under Article I of the Constitution.

It is true, of course, that many on the left have been juiced up by an all-encompassing impeachment fervor since the day President Trump was inaugurated. Who can forget the infamous Washington Post headline from Inauguration Day 2017: “The campaign to impeach President Trump has begun.”

But impeach him for this? Really?

TOPICS: Crime/Corruption; Editorial; Government; News/Current Events
KEYWORDS: impeach; pathetic; pelosi; schiff Navigation: use the links below to view more comments.
first 1-20, 21-22 next last
Hook up Adam Schiff and Jerry Nadler to a polygraph and they may well admit as much. But after Mueller struck out, Pelosi needed some sort of grist to appease Alexandria Ocasio-Cortez and the rest of the crazy far-left caucus.

Some of the crazy may vanish on election day. Unfortunately, most of it won't.

well get ready for the next one.

I’m think President Trump should tell AG. Barr to appoint a guy to look into the last affair.

Put the fear of jail into them

“Indeed, it’s not entirely clear why House Speaker Nancy Pelosi, Senate Minority Leader Chuck Schumer and the rest of the leading luminaries of the Democratic Party even decided to embark upon this national exercise in political self-flagellation.”

It’s really all about protecting abortion and preventing Trump from replacing RBG. They think that they will damage vulnerable senators in purple states to take control of the Senate and either force Trump to appoint a “moderate” who will keep abortion legal or at least keep the seat open until 2024. 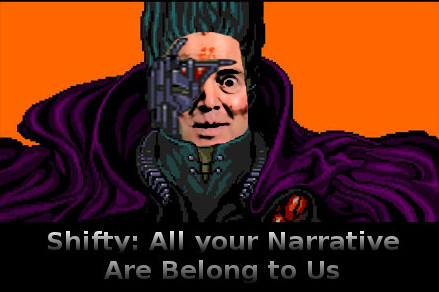 Notice how right after the House vote Nanzi was pushing for witnesses? She sat on the paperwork thinking it would pressure the Senate into doing her job. The witness they wanted was part of a last minute trap. The last minute witness would say something so shocking and unacceptable it would cause Trump voters to turn, or so the RATs assumed. I bet this same witness is trotted out in late October.

The one good thing about impeachments- because the House and Senate are all concentrating on either removing or protecting a sitting President, the government leaves us alone...remember the economic boom of the late 1990s?

Because of some RINOs. This should have been over in a day, 2hrs for Schiff, 2 hrs for the defense, then move to dismiss, vote and send it to the SJC to hold hearings on censuring Schiff and Nadler.

But no, the RINOs had to waste everyone's time and put continued existence of the party in the balance.

How about just hooking them up to a hand-crank voltmeter?

When do the treason trials start?

I was thinking an old field phone generator.

It made America less great. But....Trump worked harder and made things better in other areas.

Corrupt Auntie Maxine has promised as much. Her constituents must be dumber than a bag of rocks.

The goal of the Dems with their impeachment charade was NOT to impeach Trump.

Their goal was to so keep the lies about him front and center in the media 24x7 for such a long time that it would seriously damage him and his chances for re-election.

They succeeded in the first part of the above sentence.

We won’t know if they succeeded in the last part of the sentence above until the election.

God willing - they will have so damaged their own image that they will lose the House AND Trump will be re-elected. This should be our prayer. 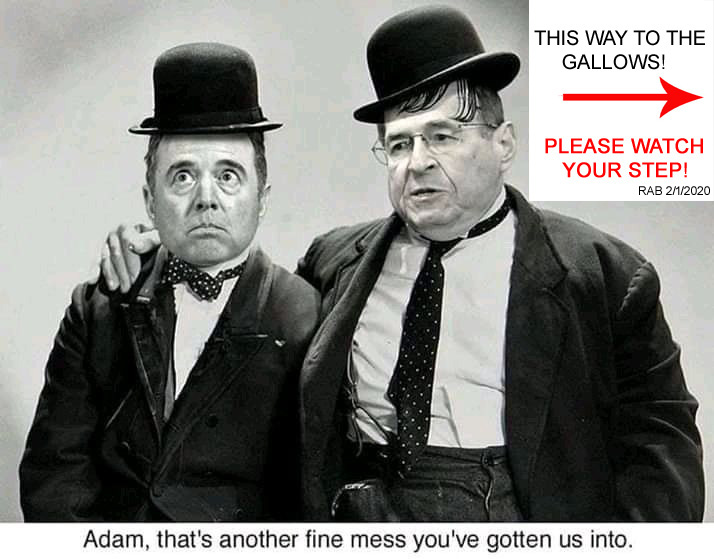 These people, who are in your life everyday, are to blame for this tragic waste of time.

One positive - Congress didn't get much done, and the less Congress does, the better off we all are.

Russians, nope
Obstruction, neither
Whistleblower of the deep state making a coup against a sitting president and American governance, not even close

What next? Terrorism? Assassinations?