But then the young, energetic, vibrant African-American — uh, black guy — came along, and they just… She’s the most cheated-on woman in America, and they cast her aside again. Well, I didn’t want that to happen. I thought that we needed the drama to continue. So we began Operation Chaos. Operation Chaos was designed to get Republican voters who didn’t care… I mean, McCain was the nominee. It didn’t matter. It was to get Republican voters to reregister so they could vote in Democrat primaries and vote for Hillary in whatever states were left.

Actually, it may have worked in Indiana.

At any rate, the Democrats were made paranoid by it. They even did a movie about Operation Chaos called The Ides of March. George Clooney was in that movie. So they’ve never gotten over it. So here’s a little bit from PMSNBC on Sunday, the Joy Reid program. She’s got some author, Nicole Hemmer — Messengers of the Right: Conservative Media and the Transformation of American Politics — and the question to Nicole Hemmer: “Is the conservative media trying to make the kinds of choices about the way that they’re covering these Democrat nominees based on who they think would be more helpful to Trump in the election?” 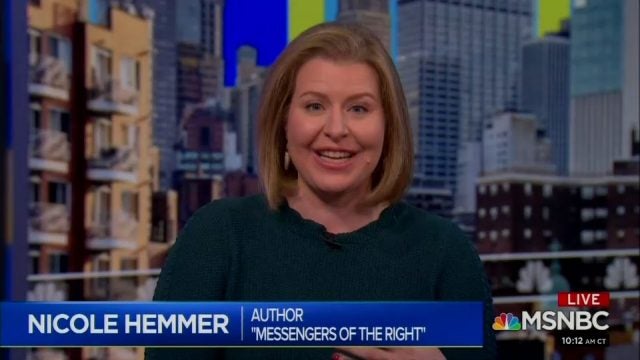 HEMMER: Sure. Of course. They’re trying to figure out how best to sow chaos within the Democratic ranks. It is something that, you know, Rush Limbaugh has done this through several election cycles, just to kind of like —

REID: He’s been an utter failure at it, by the way.

RUSH: Then why are you worried about it? Operation Chaos. It did work. It worked so well that you people got frightened by it and made a movie in which you were paranoid about it. Anyway, they’re worried about something like that happening again because the Democrat field is… Folks, these people are nuts. It’s not enough just to say that they’re colorless or dull or boring. All of that’s true. They’re just nuts, and they are clearly miles and miles and miles away from the American mainstream.

It is a haunting reality to people. So they’re worried here that I and others might try to shape events in the upcoming Democrat primaries to engineer a victory by whatever Democrat we think would be the biggest doormat for Trump — and they’re worried about it. Even though they claim such things have never worked, they’re still talking about it, doing pieces on it.

The turning point in the Hillary- O’bummer battle was the secret Bildeberger Meeting at the Marriot in Chantilly Virginia.

With Trump attacking the Deep State, they are afraid to put a good candidate against Trump and have him outed.

Trump will humiliate and destroy any candidate they come up with.

Finding a good Democrat presidential candidate is like trying to find a tootsie roll in a septic tank!

3 posted on 01/20/2020 12:01:40 PM PST by tired&retired (Blessings)
[ Post Reply | Private Reply | To 1 | View Replies]
To: Kaslin
[Operation Chaos] was to get Republican voters to reregister so they could vote in Democrat primaries and vote for Hillary in whatever states were left.

I voted in for Bernie the Dem primary in 2016--but they cheated him out of the nomination anyway. In that way, I was able to vote against Hillary twice, once in the primary and once in the general.

Sure do. Thanks, Rush, for helping Obama get the nomination. Wear a bag on your head when you do segments like this.

I remember Operation Chaos well and considered playing, but could not do it.

This year Comrade Bernie is accepting donations as low as $2.70

The Florida D primary on March 17 may or may not mean anything. In order to participate, a voter must affiliate as a Dem at least 30 days beforehand.

Flipping back is very simple.

There is a successful 2A gun rally in Virginia.

And Rush is talking about his Operation Chaos?

Hop on an airplane Rush and go over there.
Or you do not want to catch a wittle cold?

Rush is All Talk, No Action.

Operation Chaos was a plan to undermine Hillary by voting for OBAMA, not Clinton. And it worked. Some say it backfired, but I suspect President Hillary would have been even worse than Obama.

Register Democrat and vote for Bernie!!!

I think it was to vote for Hillary. I recall someone calling in to Rush and saying that he had voted for her in a caucus and had somehow wound up as one of her delegates. LOL!

It appears to me that the Dems don't need any help at all to do this!!