Absent historical context, extreme weather can be overhyped in ways that lead uninformed voters to conclude that acts of God such as severe droughts and floods never happened before humans began using fossil fuels.

In fact, extreme weather has occurred with monotonous regularity for millions of years. Below is an infinitesimal sampling of the endless multitude of catastrophic weather events in Earth’s past, many of which occurred long before the Industrial Revolution.

● Epic dust storms in the 1930s caused catastrophic ecological damage to the Central Plains of the U.S. and Canada.

● Consecutive years of extreme weather took the lives of one-third of the population during the Russian Famine of 1601-1603.

The last climate change event occurred 12,800 years ago when the Earth passed through a dense part of the Taurid astroid cloud - a bombardment with several 1 mile rocks and other smaller debris lasting 100 years.

Warning - the sun is going down tonight. Without the sun, we will all freeze to death.

We need to provide all of our resources to the government by this afternoon so they can provide life saving warmth.

4 posted on 01/19/2020 7:41:51 AM PST by fruser1
[ Post Reply | Private Reply | To 1 | View Replies]
To: Kaslin
I was just looking over some ice core sample CO2 and temperature graphs. Interestingly, there have been significant ups and downs over the last 100,000 years. And very interestingly, the "global warming" websites only feature the last "up", making it look like previous levels were low and only now do we see a big spike. If you look at the WHOLE last 100,000 years, you can see that there were previous large spikes as well, quite before the Industrial Revolution. 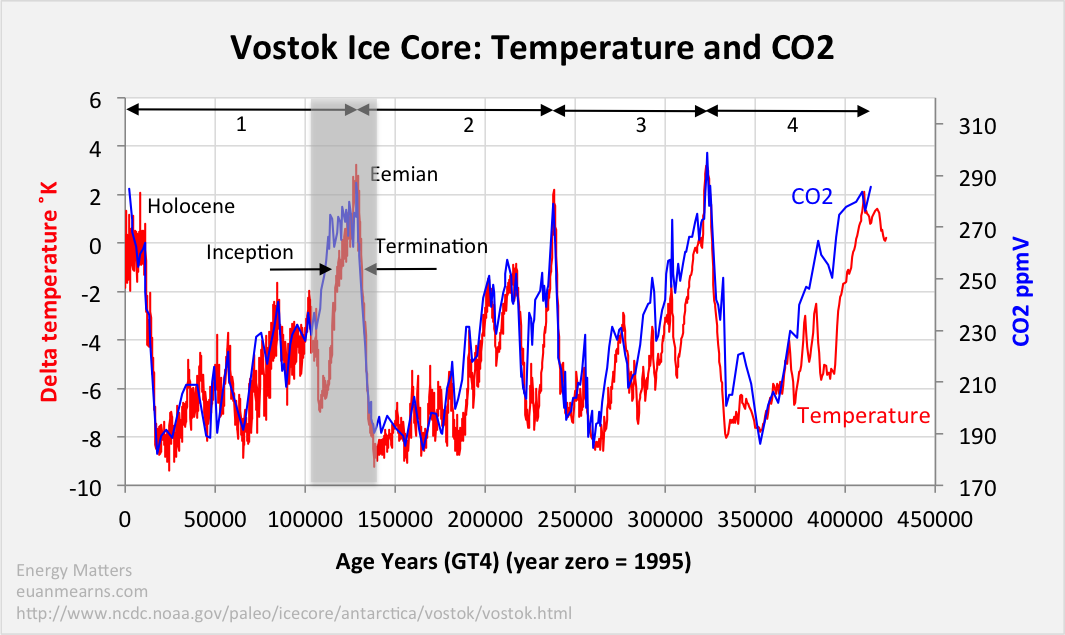 If it’s not on record, it doesn’t count. If it’s recorded and doesn’t coincide with their narrative then it’s discounted as a one off event. Okay DOOMERS! IF they really cared, they would simply remove themselves from the equation. But nooooooo.

The planet is 4.5 million years old. Its climate has had wide swings in atmosphere content and climate in that time. There have been at least 5 mass extinctions of life which has only been present for maybe 1 million years.. Land based life, including plant and mobile animal life, has only existed for 400 million years and that has been extinguished several times. Mosquitos still kill more of us than wars and famine. The planet in the geological time scale is an unfriendly place. We have survived because we can organize and adjust to climate changes. We will again, if and when it comes.

The Great Fire of 1910 was a wildfire in the western United States that burned three million acres (4,700 sq miles) in North Idaho and Western Montana, with extensions into Eastern Washington and Southeast British Columbia, in the summer of 1910. The extensive burned area was approximately the size of the state of Connecticut. Interestingly, the fire burned over two days on the weekend of August 20–21, after strong winds caused numerous smaller fires to combine into a firestorm of unprecedented size. It killed 87 people, mostly firefighters. It is believed to be the largest, although not the deadliest, forest fire in U.S. history.

All the doomsaying-climatistas say all the California wildfires are indisputably the result of Global Warming / Climate Change. That's a load of BS.

The Great Fire of 1910 cemented and shaped the U.S. Forest Service, which at the time was a newly established department on the verge of cancellation, facing opposition from mining and forestry interests. Before the epic conflagration, there were many debates about the best way to handle forest fires—whether to let them burn because they were a part of nature and were expensive to fight, or to fight them in order to protect the forests.

One of the people who fought the fire, Ferdinand Silcox, went on to become the fifth chief of the fire service. Influenced by the devastation of the Big Blowup, Silcox promoted the "10 a.m." policy, with the goal of suppressing all fires by 10 a.m. of the day following their report. It was decided that the Forest Service was to prevent and battle every wildfire. More recently, this absolutist attitude to wildfires has been criticized for altering the natural disturbance mechanisms that drive forest ecosystem structure, which paradoxically increases the destructive potential of forest fires.

Time honored techniques for over 400,000 years.

My wife and I are interested in farmland 200 miles north of Edmonton when the Gorebull Warming comes to get its. Who wants to join us. We only have another 11.25 years.

10 posted on 01/19/2020 8:00:24 AM PST by olesigh
[ Post Reply | Private Reply | To 8 | View Replies]
To: EinNYC
The chart you have linked to has either been mislabeled or as in Al Gore's movies, intentionally altered. It shows CO2 leading temperatures. One of the most important observations from Vostok ice core studies is that increasing temperatures always lead increasing CO2. This is thought to be caused by the largest sink of CO2, the oceans releasing vast quantities into the atmosphere when their waters warm.
11 posted on 01/19/2020 8:06:54 AM PST by fireman15
[ Post Reply | Private Reply | To 5 | View Replies]
To: Kaslin
● The Great Hurricane of 1780 killed 30,000 people in the Caribbean.

You forgot the great Hinckley firestorm of 1894.

On September 1, 1894, two forest fires converged on the town of Hinckley, MN, trapping more than 2,000 people.
The famous “Biscuit” fire in Oregon burned 350,000 in one week, the Hinckey fire did the same in five hours. Over 400 people died.

13 posted on 01/19/2020 8:15:36 AM PST by OregonRancher (Some days, it's not even worth chewing through the restraints)
[ Post Reply | Private Reply | To 9 | View Replies]
To: fireman15; EinNYC
Both are true. The EinNYC chart has a very coarse time scale. Thus it shows CO2 leading temperature. But in fact temperature leads CO2 on most short time scales, by about 500-1000 years. Here's a description: http://joannenova.com.au/global-warming-2/ice-core-graph/

Note that the lag from temperature to CO2 has no real relevance to the recent rise in CO2. The recent rise is from 280 to 412 (and rising 2-3 more every year). There was no corresponding temperature rise 500 to 1000 years ago to produce that CO2 rise.

And there it is... Fairly easy to see that CO2 was higher, and it was quite a bit warmer during several previous interglacial periods than the one we are in now. In reality have have had a cooler cycle this time around.

Thank you for posting this, All BS aside, this is the reality of it right here.

But our scientists are so good they can determine a trend with 30 years of data which will eventually be deemed unreliable as technology advances.

The graph has temperature leasing CO2 for the most part. You have to read from right to left, since the past is to the right.

Looks like the alarmists are shifting their scare focus from Greenland to Antarctica. Perform a google search on “Antarctic ice cap melting”. Google will offer articles detailing hundreds of absurd predictions that have not and will not come to pass. If one performed the same search 10 years ago, you would see a never ending list of the same articles going back to the 1990s. Insanity

Apparently you are getting your information and possibly charts from sources which have been making valiant attempts to write the “Medieval Warm Period” out of existence. There is ample evidence that the Warm Period that lasted from around 950 until approximately the Maunder Minimum that started around 1675 was much more than a local event.

...and you forgot the Peshtigo fire, October 8, 1871, in northeastern Wisconsin, including much of the Door Peninsula, and adjacent parts of the Upper Peninsula of Michigan. The largest community in the affected area was Peshtigo, Wisconsin. It burned approximately 1,200,000 acres (1,875 square miles) and was the deadliest wildfire in American history. Estimated deaths are 1,500 to 2,500 people.

Our points are the same, though. All of these great fires occurred LONG BEFORE the hysteria about “climate change.” Of course, we know that is impossible because history started today at breakfast.