It took a while for me to understand the nagging feeling I got from the Democratic debate in Iowa Tuesday night. I kept grappling with my dissatisfaction and could not find the right words.

Then I saw a USA Today article that captured my response perfectly – and my feeling was reinforced, because it was articulated by a friend with whom I have worked on criminal justice reform, Van Jones.

Before noting that he wanted a Democrat in the White House, Jones told USA Today: “Democrats have to do better than what we saw tonight. There was nothing I saw tonight that would be able to take Donald Trump out."

The article went on to say that Jones “described the debate as ‘drudgery’ at a time when Democrats need to inspire voters.”

It was that sense of drudgery that had been lurking at the back of my mind – until Van articulated it.

One of the reasons Sen. Bernie Sanders, I-Vt., remains a major contender is that he actually believes what he says. He may be way too far to the left. His preference for Fidel Castro over John F. Kennedy may be jarring. His commitment to socialism may make him a nightmare for normal Democrats. But Bernie delivers – with enthusiasm and excitement – his formula for a better America through bigger (indeed gigantic) government.

Tom Steyer is proof that inside the anti-billionaire party there is plenty of room to buy your way on the stage past senators, governors and other traditional political leaders. He at least has a coherent message focused on impeaching Trump and treating global warming as a threat.

” a friend with whom I have worked on criminal justice reform, Van Jones” -— Ugh. The goal of which is to release unreformed, unrepentant, non-white criminals, who will then victimize society again. 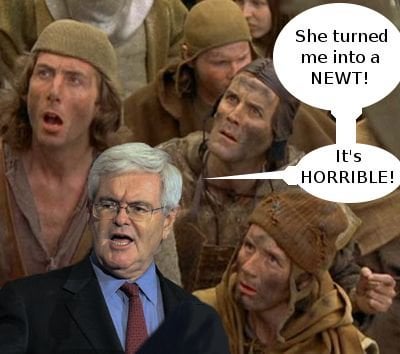 Newt Gingrich: After Iowa Democratic debate, party could get its nightmare: Trump’s reelection

Ridiculous headline from Fox. It’s phrased to make it seem like Trump is the underdog.

4 posted on 01/16/2020 8:14:20 AM PST by bramps (It's the Islam, stupid!)
[ Post Reply | Private Reply | To 1 | View Replies]
To: jazusamo
The problem is that you have nothing to offer when your whole existence centers upon forcibly taking money from one person and giving like a gift to another... so that the second person will vote for you.

Please bump the Freepathon or click above to donate or become a new monthly donor!
6 posted on 01/16/2020 8:45:16 AM PST by jazusamo (Have You Donated to Keep Free Republic Up and Running?)
[ Post Reply | Private Reply | To 1 | View Replies]
To: jazusamo

“His commitment to socialism may make him a nightmare for normal Democrats.”

You can’t be normal and a democrat.

You’re dead to me, Newt.