U.S. officials are on high alert for signs of a possible missile launch from North Korea in the coming days that officials have referred to as a “Christmas gift.”

A significant launch or nuclear test would raise the end of North Korea's self-imposed moratorium on missile launches and tests. It would also be a major blow to one of President Trump’s major foreign policy goals to get North Korea back to the negotiating table to eliminate its nuclear weapons. 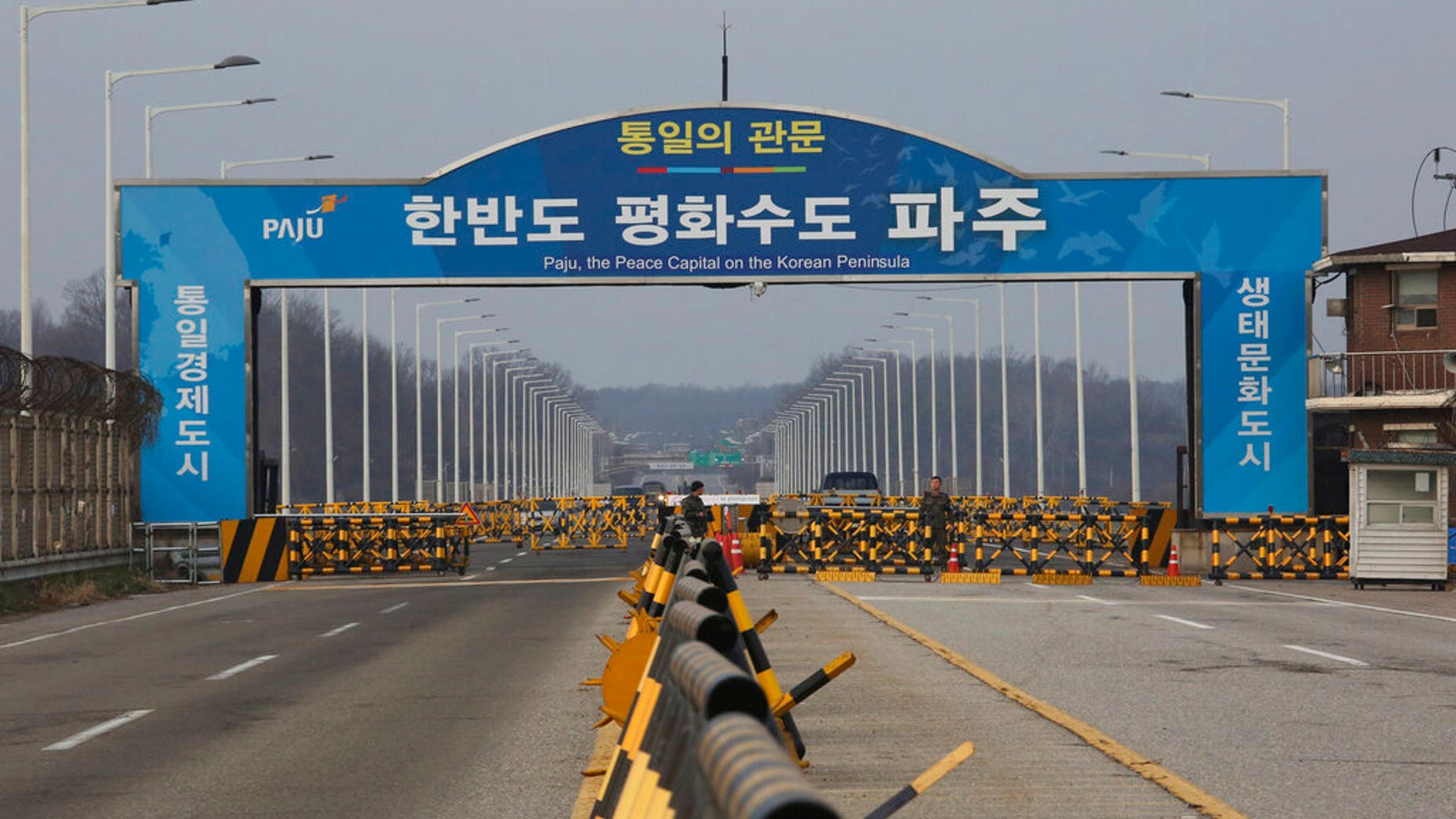 In this Dec. 16, 2019, photo, South Korean army soldiers stand guard at the Unification
Bridge, which leads to the Panmunjom in the Demilitarized Zone in Paju, South Korea. (AP)

Earlier this month, the North conducted what U.S. officials say was an engine test. Experts believe it may have involved an engine for a long-range missile.

"North Korea has been advancing. It has been building new capabilities," said Anthony Wier, a former State Department official who tracks nuclear disarmament for the Friends Committee on National Legislation. "As long as that continues, they gain new capabilities to try new missiles to threaten us and our allies in new ways,"

North Korea warned of a possible "Christmas gift" in early December, saying the Trump administration was running out of time on nuclear negotiations, and it was up to the U.S. to choose what "Christmas gift" it gets from Pyongyang.

Victor Cha, a Korea expert at the Center for Strategic and International Studies, said a review of the possible launch sites in North Korea shows they are a "basically ready to go."

Defense Secretary Mark Esper told reporters earlier this week that the U.S. has heard all the talk of a possible upcoming test around Christmas.

Nice missle you got there rocket man. Would be a shame if it blew up on the launch pad.

This is a DIRECT result of the 24/7/365 attacks upon our President by the Deep State/Dems/MSM/Entertainment Industry.

The Communist Chinese and their Puppet State may be willing to test President Trumps ability to command and project power because of domestic politics and, all the pressure he is under by the aforementioned groups relentless assault upon him.

In my opinion the best response to this threat would be not to respond to it at all publicly or with back channels.

Maintain total silence. Let doubt creep into the Communist Chinese and, place anti-missile tech quietly in the vicinity. IF they Launch knock the weapon out of the sky and NOT UTTER a word about it.

If they inquire, simply smile and say I don’t know what you’re talking about. And, hang up.

This is what happens when the Democrats smear President Trump with a fake impeachment.

No enemy would do us the favor of nuking Seattle or San Francisco.

This is China striking back for the tariffs and Trump going after Huawei. Rocket Man does not call the shots.

DemocRats are hoping pleading praying (such as they are able), sacrificing small fury animals to Marx, etc.

No one else has tried in 25 years to slow down North Korea. So I guess they didn’t have a major blow to their efforts.

Now Trump tries to end things peacefully, and they slam him as if he was foolish to try.

You do the best you can to use alternative methods. If that doesn’t work nobody can say you didn’t try.

Well, nobody this side of insanity that is.

I believe Trump goes by the philosophy of the Great Seal of the US. The Eagle is looking towards its talon clutching an olive branch, however it also is clutching a set of arrows just in case they are needed.

“All we are saying, is Give Peace a Chance”

Trump gave it a chance, it didn’t work. We gave nothing up.

14 posted on 12/22/2019 10:21:29 PM PST by dfwgator (Endut! Hoch Hech!)
[ Post Reply | Private Reply | To 12 | View Replies]
To: Perseverando
The well oiled theft machine that feeds the Deep State scum are as horrified of peace between North and South Korea as they are of NATO being broken up.

They've worked their butts off to sabotage every effort Trump makes to remove troops from Syria or Afghanistan so does anyone really believe that given how eager North Korea is to end the isolation it's been in the Deep State reports anything or will stop at anything to keep Korea part of their "critical" pools to pour cash into and extort cash from?

Anything the North launches has a lot more to do with their own schedule of tests than whether it's Christmas, New Years, Valentines Day, or any other line of crap that spices up a BS headline.

North and South Korea both want peace and that scares the Hell out of a lot of military folks who understand how command slots and promotions are tied to deployments. If Korea were to unite and be peaceful a lot of careers would end with a lower rank and lesser job in the MIC.

Good point, but other international deals are going through and the financial market is sound. That kinda says something about the effectively irrelevant Dem Thugs and Comcast.

They are faking the data and altering the images. Kim Jong Un is totally honest and transparent and is now our friend, he’s turned over a new leaf. This CANT possibly be true. President on Fox News interview said he would know within five minutes in Singapore whether Kim was straight or not with him. All those short range missile launches and SLBM since this May were deep state faked too likely. They got North Korean media to report the set up as well to make their own Kim look bad and intransigent. . To show that North Korea would violate the brilliant 18 month peace effort and friendship with Kim is a sham, a fabrication. There must be some kind of conspiracy to get Trump and fake the pics and data. I bet all the AWACS and Cobra Ball and Rivet Joint and Global Haw, U-2 flights this week by US Forces is a faked Hollywood set, same for Japan enacting PAC 3 batteries. All one big fake out. I believe the ruthless dictator ...Trump believes him. End of story good enough for me.

Democrats are going to add articles of impeachment for making NK mad.

What do you expect from FOX, since they started turning more left?