Clearly Greta Thunberg is being exploited by her cynical puppetmasters, but equally clearly she’s a tiresome, bizarre Marxist scold whose exploitation of the hapless dummies who buy into the climate change hoax is part of what is an increasingly violent plot to undermine capitalism and freedom. Recently, the cretins at TIME, which shockingly still exists in 2019, named her “Person of the Year.” That’s appropriate, since 2019 has been a very annoying year.

In 2029, after the world hasn’t ended but her usefulness has, she’ll be a Jeopardy question and probably shacked up with an unemployed performance artist named Björn in an Oslo suburb. Fun fact: “Greta Thunberg” is Swedish for “Cindy Sheenhan.”

But today, we’re all supposed to fall over ourselves over Pippi Longnagging – at least that’s what our betters command – yet it’s unclear why. Teenagers are notoriously ignorant, and ones spewing recycled Marxism are the worst of all. But the idea is not that this tiresome truant is some visionary thinker. The idea is to leverage her youth and awkwardness to keep you from speaking the indisputable truth that she’s a weird brat who presses for an ideology that butchered 100 million people in the last century. And now, she is hinting she wants to run up that score.

Trump mocked her and a zillion pearls were clutched. How dare you…criticize the Luddite pest who presumes to tell you how to live, leveraging the full benefit of her nearly 17 years of experience to explain to you how stuff should be. How dare you!

The kid is a fanatic, and though that’s no fault of her own – she’s a victim of her pinko exploiters – she is still spewing bloodstained poison.

Bloodstained poison, really? Isn’t she just a nice Eastern Norwegian who wants a better world with love and hugging? Or is she yet another aspiring fanatic ready to kill for the kreepy kommie climate kult?

The other day, this malignant muppet “told cheering protesters … 'we will make sure we put world leaders against the wall' if they fail to take urgent action on climate change.” Now, maybe her English is bad, or maybe she’s just ignorant, but then again the murder of opponents is the Marxist way. Marxist? St. Greta? Well, let’s take a look at what was carved on the tablets she recently brought down from Mount Socialism:

"Schoolchildren, young people, and adults all over the world will stand together, demanding that our leaders take action, not because we want them to, but because the science demands it," she said. "That action must be powerful and wide-ranging. After all, the climate crisis is not just about the environment. It is a crisis of human rights, of justice, and of political will. Colonial, racist, and patriarchal systems of oppression have created and fueled it. We need to dismantle them all. Our political leaders can no longer shirk their responsibilities."

Wait, “the science demands” that we “dismantle” all our “[c]olonial, racist, and patriarchal systems of oppression?” Now, what science exactly is that? Is it geology? Physics? Phrenology maybe?

How stupid do they think people are? Very. And to judge by the judges at TIME, they’re often right. Maybe Greta never heard of Siberia or Cambodia, but we have. Screw that – if she wants to impose her masters’ Marxist fantasies on us, she’ll need to be packing something deadlier than “How dare you!”

Everyone who isn’t an idiot knows the climate change hoax was never about “science." That’s a hack lie they use to shut you up when you point out that the ice age, floods, and mass polar bear die-offs they are always promising never, ever seem to happen. It’s a deliberate scam that blends leftism, hysterical hyperbole, and outright fraud into a gooey pudding designed to fill the spiritual void in empty-souled western suckers while providing a tool for our global leftist establishment to steal more of our money and freedom.

Quick: name a climate change remedy that does not result in you being less free and/or paying more money. It’s actually remarkable. Every single thing that we absolutely must do right now no time to wait how dare you pause to think how dare you is something leftists always wanted but could never talk people into doing until the threat of weather vengeance started lurking around the corner.

You can’t name any. There aren’t any, because the weird climate cult is not about weather but about separating you from your liberty and loot. And, apparently, your life if you won’t obey.

It’s still unclear why the weather weirdos decided to make the odd Ikea kid into their poster child. Americans aren’t that stupid, electing Obama aside. Now, Europeans are suckers for bizarre totalitarian ideologies – that cesspool of a continent gave the world communism and Nazism, so it’s no surprise that the dummies who didn’t get off der buttenhiemers and sail over to America would swoon over her nonsense. But it’s just another example of how out of touch our own garbage ruling caste is when it thinks her Swedish chef scolding is going to work on Normal Americans.

“Hey American person, some vapid punk from Malmö demands you give up your steaks and Ford Explorers.”

“Oh.” [Consumes a rib-eye and lets his SUV run in the lot outside the restaurant].

Hey, if she and her herring-gnawing comrades want to start playing real life revolutionaries, bring it on. In the USA, these Pol Potheads wouldn’t be the only people doing the shooting. Maybe cowardly euroweenies will obediently jump on the train to the gulag, but our American response to Marxist murder dreams would be measured in calibers.

Now, Greta clearly believes all the silliness she is regurgitating, and she will certainly be sad when we ignore it. And that’s too bad. Her feelz are utterly immaterial. In fact, the sadder she gets, the freer we are.

In a general sense, I hope that Greta someday liberates herself from the clutches of the people exploiting her naïve credulousness in order to take our freedom and dollars. But in a more specific way, I could not care less what Greta thinks or feels. And you shouldn’t either.

You can look at the expressions on her face and tell she is b*tsh*t crazy. It is sad to see someone so young totally mentally ill. And we know it won't get any better. It sends shivers up my spine to think that she might be married to some poor pathetic sucker someday.

It’s been noted that someday she’ll make a great ex-wife.

Kurt nails it in the first line.

Why hasn’t this girl criticized China?

Who cares? It’s not like anyone reads Time anymore.

Her demonic possession is a foregone conclusion to exhort the masses towards socialism everywhere, so that the freedoms and liberties of nations can become subservient in the minutest details of everyday life because of climate change. She even exhumes the putrid corpse of Che Guevara
to prick his balls in case they are not empty, in hopes of bearing his necrotic child to inflict on nations of freedom and liberty.

Time magazine editors have been poisoned by her ichorous beverage, fools for a young socialist psychopomp.

Thunberg can take her place in the dust bin of history as soon as possible or die of her insane self affliction, whatever works for our genuine humanity.

It is what they do.

Her picture of her sitting on the floor surrounded by her luggage on the German train was BS. The train personnel issued a statement that she traveled first class.

Couldn’t agree more. This is what happens when political scientists think they know something. Mixing politics and science yields consensus, which yields bad science.

“Eastern Norwegian”. I see what you did there.

Poor kid. She has no idea she's going to crash and burn at an horrific breakneck pace.

Then she is going to turn on her handlers, parents, and NGO enablers. Wait until she finds out how much money the wizards behind the curtain spent pumping and then dumping her.

She's like Chuckie with pigtails. She sure ain't no Shirley Temple.

Think about nursing homes, democrats, and votes. That’s all you need to understand the moral compass of democrats.

Read that the other day. That article and this one are priceless.

Honestly, I think Chucky is way more likable. At least Chucky has a sense of humor.

Change it to Spooled Retard of the Year.

Not just girls. Look at how they exploited Cindy Sheehan in her grief. It would’ve been harder if she had been playing with a full deck, which she wasn’t. They used her, used her up, and threw her away when she was no longer needed. 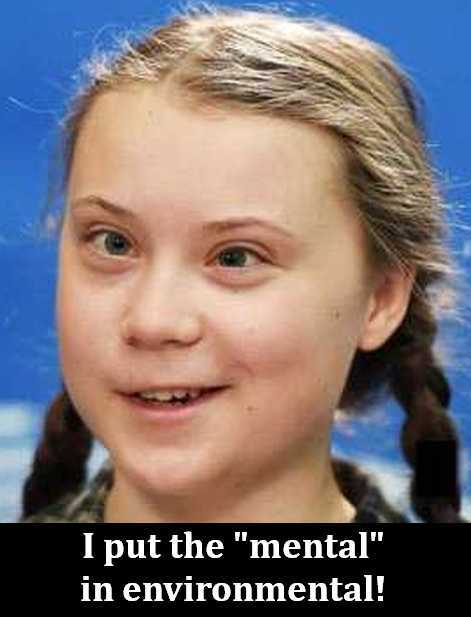