Santa left an early present in Donald Trump’s stocking — via the Bureau of Labor Statistics. Job creation in November hit a one-year high and marked only the third time in 2019 that the US economy added more than 200,000 jobs in a month. The unemployment rate remained low, although the civilian participation rate dropped slightly.

Part of the gain came from the end of an auto-worker strike, but even without that, job creation would have been relatively robust and well over 200K:

Total nonfarm payroll employment rose by 266,000 in November, and the unemployment rate was little changed at 3.5 percent, the U.S. Bureau of Labor Statistics reported today. Notable job gains occurred in health care and in professional and technical services. Employment rose in manufacturing, reflecting the return of workers from a strike.

Both the unemployment rate, at 3.5 percent, and the number of unemployed persons, at 5.8 million, changed little in November. (See table A-1.)

The number of long-term unemployed (those jobless for 27 weeks or more), at 1.2 million, was essentially unchanged in November and accounted for 20.8 percent of the unemployed. (See table A12.)

The labor force participation rate was little changed at 63.2 percent in November. The employment-population ratio was 61.0 percent for the third consecutive month. (See table A-1.)

The revisions also added to the holiday joy, boosting previous job creation numbers by 41,000 over the past two months. That puts the three-month average for job creation at a respectable growth level of 205,000. That also more or less negates the impact of the strike, which took place entirely within that three-month period, meaning job growth has returned to a healthier level at the close of 2019.

Wage growth also continued its winning streak. Average hourly earnings in November went up by seven cents, which annualizes to wage growth of 3.1%, well ahead of inflation. That means consistent, if not spectacular, growth in purchasing power for working families, a point that will not be lost on those families if that continues through next November.

Another hint of better job growth came in the part-time numbers, which declined across the board but especially in the economic-reasons categories. Those working part-time because of slack economic conditions dropped by 121,000, while those who could only find part-time work dropped by another 19,000. The level of reported discouraged workers dropped by 16,000 from October and has fallen by 128,000 over the past year, although those numbers are not seasonally adjusted.

Barron’s notes that Wall Street loves the numbers, as well they should:

USA Today’s Paul Davidson writes that it “reflects a healthy economy,” and also that it beat expectations by a wide margin. He also notes the political significance of the report:

As the 2020 election draws closer, job creation under Trump is likely to be scrutinized more closely. The federal tax cuts and spending increases he spearheaded spurred more hiring but his trade fights and immigration crackdown likely have offset much of the gains, leading economists say.

Economists had forecast 184,000 job gains for November, according to the median estimate of a Bloomberg survey.

And Reuters almost uses the “U” word:

The dollar rose against the yen and extended gains versus the euro on Friday, after data showed the world’s largest economy created many more jobs than expected in November, backing the Federal Reserve’s stance of pausing interest rate cuts at its last meeting.

This might be the least equivocal jobs report we have seen in quite a long time, maybe even since 2017. It comes at a particularly good time for Trump, not just in the election cycle but also in contrast to impeachment. We can expect the White House to argue that this shows Trump is focused on the people while the Democrats in Congress are focusing only on themselves — and if that’s not a message that’s already out by the time this post goes up, someone in the White House comms center needs to find a new job.

Blow the hell out numbers!

The unemployment rate resumed its recent decline, and in November dropped from 3.6% to 3.5%, a fresh 50 year low... 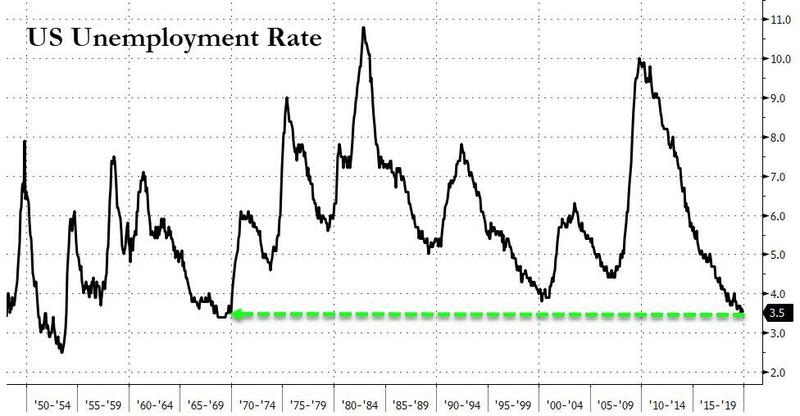 even as the unemployment rate for blacks and Hispanics posted a modest increase. 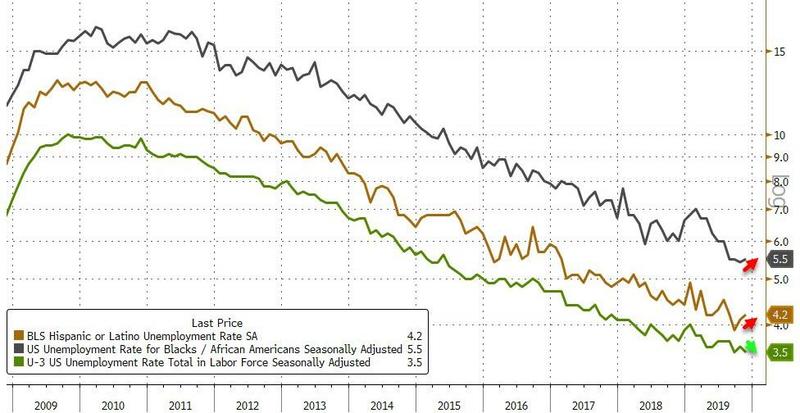 More importantly, while average hourly earnings rose 0.2% from the prior month, slightly below expectations, annual wage growth increased by 3.1%, with last month's wage growth revised from 3.0% to 3.2%, suggesting employers are responding to a tight labor market; wages for production and non-supervisory workers rose 3.7% annually after a 3.8% gain, which was the best since 2008. 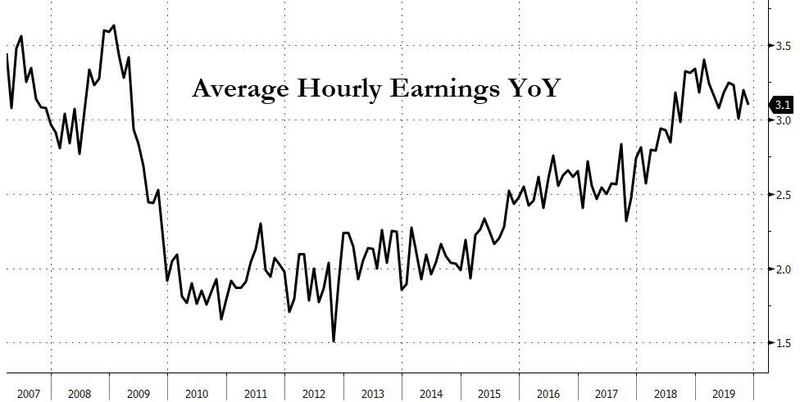 Looking at which industries added jobs, the BLS has the following breakdown:

The “experts” telling us what the tariffs and trade war is doing missed the number by almost 100k jobs. Why should we assume they have the faintest idea as to what is going on?

Any thoughts how there was such a wide divergence from the ADP number of 67k?

Yeah, that inpeachment ploy is working great, you wicked Democrats.

I wonder how ADP gets it so wrong ?

LOL…on a day after the braindead Dems decide to impeach this president, the employment numbers blow the lid off expectations. Of course, the Democrat media will make every effort to keep the spotlight on the cadaver from CA, the Specter of the House, who drags out her Catholic faith when it’s convenient.

“I wonder how ADP gets it so wrong ?’

I asked the same question. I’m sure Nazi Pelosi is saying “how did the government get it do wrong?” hearings to follow.

here’s their gobblygook. I am lost...

Now this really was unexpected!

Markets are up. Well, except for the DJIA as being reported by CNN. Their website that is supposed to show current numbers has had the Dow up just 28.01 all morning. I just now realized it hasn’t budged while the S&P and NASDAQ are updating fairly regularly.

Suspicious, as is my nature, I checked a couple of other websites that show current numbers. They both showed the Dow up nearly 300 pts.

CNN...getting more fraudulent by the minute.

Trump knows a lot of 4 letter words, but the one he knows best is J O B S. /s

Wait, Biden said that was a 3 letter word...