Democrats have all the advantages you can possibly imagine in the impeachment hearings, every single one of them. Yet they’re losing, badly.

They set the rules, then don’t hold themselves to them and still come off as desperate and pathetic. I’d feel badly for them if they weren’t so awful.

Of all the examples of hypocrisy and incompetence on display in this sham, one sticks out to me beyond the others, and it’s perhaps the most disturbing. It’s how willing Democrats are to beclown themselves for the cause.

Zealots have always been willing to go to any length to obtain their objective. People routinely strap explosives to their bodies and ignite them, for just one example. But politicians, particularly American politicians, generally had more sense than this. Not anymore, it seems.

The concept that every American is entitled to the presumption of innocence until they’re proven guilty shouldn’t be controversial. What individuals think is irrelevant, the legal standard demands this this standard. That legal standard is why an obvious murder is always referred to as “alleged” in news stories. But politics is different.

Accusations in political campaigns are always presented as fact, no matter how outlandish or untrue. They aren’t meant to change anyone’s mind, they’re meant to reinforce those who already agree and maybe infiltrate the minds of those who have no thoughts on the subject.

So, when a Democrat says President Trump is corrupt, it’s not outside the norm. When a Republican calls Adam Schiff a liar, it surprises no one. But in these impeachment hearings, Democrats have taken this a step further.

Speaker of the House Nancy Pelosi, who sets the tone for her caucus, said at a press conference, “If the president has information that demonstrates his innocence in all of this, which we haven’t seen. If he has information that is exculpatory -that means ex, taking away, culpable, blame – then we look forward to seeing it.”

With that statement, the presumption of innocence is gone. President Trump, according to Pelosi, has to prove he didn’t do anything wrong, not the other way around.

That’s bad enough, though still not completely surprising. But something else was.

I was reminded of this argument by a glorified blogger for the Washington Post, essentially a Democrat with a press credential. Aaron Blake tweeted last week, “Rep. John Ratcliffe (R-TX) now focusing on how Zelensky said he didn't feel pressured or blackmailed and there was nothing corrupt. Zelensky knows he that if he said any of that, he would be dead to Trump. He could never admit it.”

Essentially, this liberal stenographer, repeating what Democrats had been mumbling for some time, is calling the new president of Ukraine a liar.

President Zelensky has denied any pressure at all to investigate the Biden family’s possible corruption. None. Zero. Yet the story now from the left for those repeated statements is “Zelensky is weak and cowardly.” They’re saying this man, who was elected to fight corruption in his own country, is corrupt himself, that he’s a fraud. For all the talk of the importance of Ukraine to U.S. national security – and you could easily come away from these hearings with the impression that no other country matters more, or at all, based on some of the hyperventilating words of some Democrats and witnesses – it seems odd that the team making those claims would smear its new president like this.

An elected Democrat finally brought this very same argument forward, making things even worse. On Sunday, Connecticut Sen. Chris Murphy told CNN, “The Ukrainians aren't going to come out and accuse the president of extortion. Why? Because they are presently reliant on the good will of Donald Trump to keep that country safe.”

Murphy went on to say, “Nobody should be surprised when the Ukrainians are trying to put as good a spin on this as possible, are trying to stay in the President’s good graces, because right now the president still holds enormous leverage over that country’s independence and sovereignty.”

I’d say they don’t have much independence or sovereignty if they’re dependent upon any other country, but I’m old fashioned that way.

Still, it’s an attack on Zelensky, the man whose country they say they’re outraged on behalf of, in order to discount a very powerful piece of that exculpatory evidence Nancy Pelosi said she is open to receiving. It’s almost like all the Democrats are lying, isn’t it?

These aren’t the types of things people with facts and evidence on their side do, mostly because they don’t have to. This is what political hacks wouldn’t have done just a couple of years ago. This is what Democrats have become. That tells you something, doesn’t it?

They were really exposed though with Kav’s confirmation hearing. Complete nutcase leftwing loons with no morals or limits on how low they’ll go to achieve their political ends. There’s never a search for truth with this crowd.

Ingraham did a good analysis of the day here:

2 posted on 11/21/2019 5:20:40 AM PST by TigerClaws
[ Post Reply | Private Reply | To 1 | View Replies]
To: Kaslin
I'm waiting for one of the Republicans to "accidentally" mention Eric CIAramella. Or without naming him, name him by description. Something like:

"LtCol Vindman passed his recollection of the phone call to his old NSC staff buddy who is now back at CIA, who went right to his old friends from the NSC who now work for Adam Schiff."

Naming Eric CIAramella on network TV is pulling the pin on the grenade that blows up Schiff's impeachment farce. 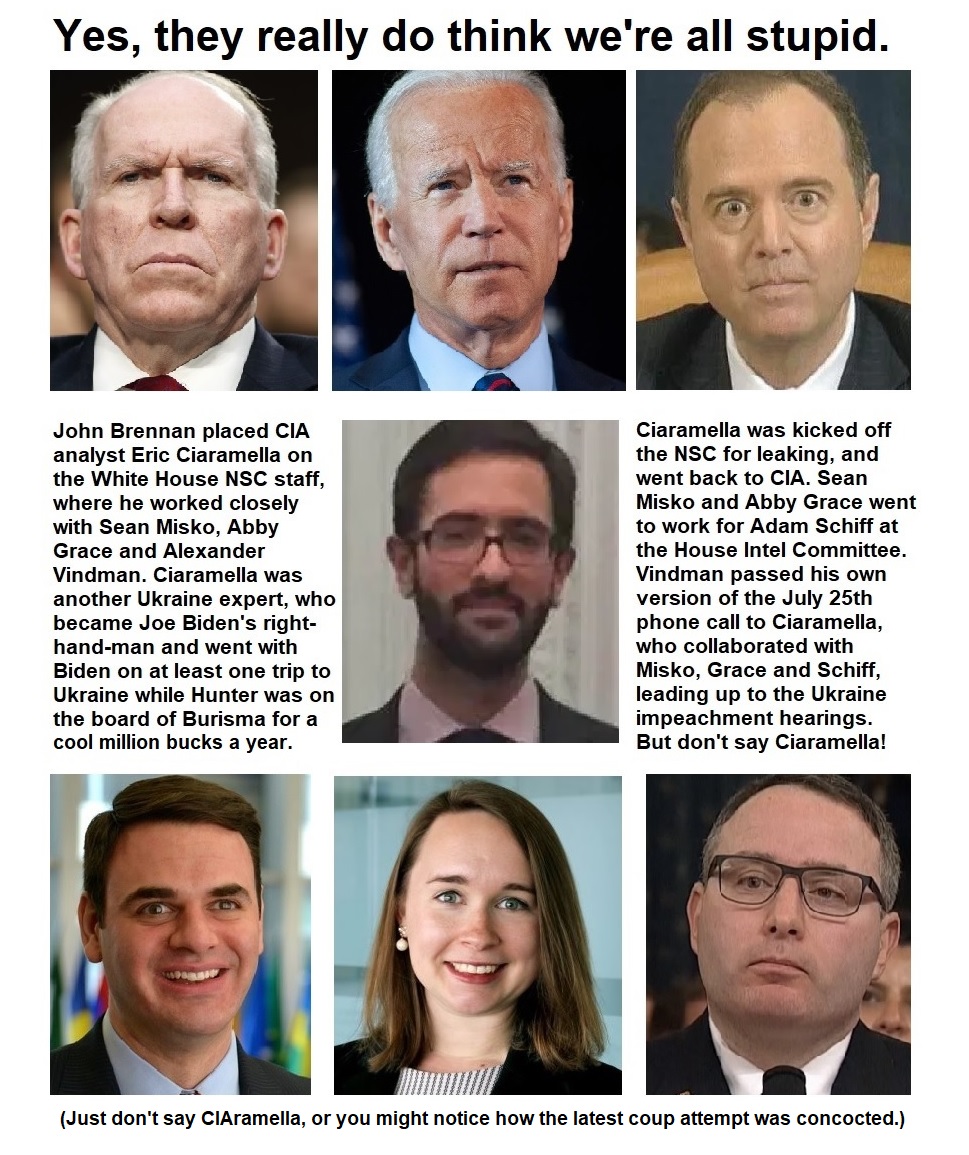 I'm waiting for the hammer to fall. They can't be allowed to get away with this.

The left will never say anything along the lines of: “Golly, we sure were wrong about Trump. He’s a swell guy and a terrific President.” No matter what.

Because this is not 1973 anymore when Walter Cronkite and Dan Rather could work with the NYT to do hit piece after hit piece on Nixon and Agnew on the CBS Evening News and far more many trusted CBS and the NYT compared to now.

Now that Drudge has been sold to the liberal MSM crowd, here’s a better site for info:

(I have nothing to do with the site, but a buddy sent it and it’s been good the last few days. I try to completely avoid Drudge now so as not to up their view count which is how they value web pages. )

Thanks for that link and those comments.

Yes they think we are stupid or impotent.
They are still laughing at us over Epstein’s “suicide.” It was blatantly NOT a suicide, but they said it was suicide and there is not a damn thing we can do about it.
We should be waterboarding the guards, and a whole bunch of people from that prison.

Yep. It’s “What are you going to do about it, punk? Nothing, that’s what.”

I sure hope Jordan will mention how much money has come into Trump’s campaign since these hearings begun.

And it isn’t pretty!

They have taken to lying like I’ve never seen before... and the media also, Make it up and lie in the face.... pretty lame ... and this they cannot live down in 2 lifetimes. It has shown how depraved they are in their quest for power and never allowing a “low life” to be in their sick circle! and never sit in the seat at the White House. Just one chink in the armor... He’s still there.. in case they didn’t notice!

If Trump is removed, Pelosi, Schiff et al will be exterminated. They will not be allowed to destroy America

I’d like a republican to simply place a Caramello bar on the table in front of him or herself.

If schiffty objects, have another one to offer him...

Some of the players pictures. Thanks. When did they stop putting those “WANTED” pictures in the post office? Or the good old western days WANTED D or A.

Regardless of the facts and principles, the media will reports whatever they like.