Heading into the weekend we were anticipating a top ten that would deliver around $110 million, as it turns out the top ten currently falls just short of a combined $100 million as Lionsgate's Midway delivered a surprise #1 finish, topping WB's Doctor Sleep, which slipped to second and well below expectations.

At the top of the weekend box office is Lionsgate's Midway, finishing ahead of expectations with an estimated $17.5 million from 3,242 locations. The film also scored an "A" CinemaScore from opening day audiences and should expect a strong performance over Veteran's Day tomorrow that should push the film's four-day gross over $20 million.

TOPICS: Culture/Society; News/Current Events
KEYWORDS: boxoffice; culture; hollywood; midway; militaryhistory; moviereview; movies; usnavy; ww2 Navigation: use the links below to view more comments.
first 1-20, 21-40, 41-60, 61-80 ... 161-162 next last
The American Heroes who carried us to victory and marked the beginning of the end of a dreadful evil are still alive in the hearts of movie-going patriots in the United States.

to all the doubters, naysayers, nattering nabobs of negativism on this board and elsewhere -- if you miss this movie, it's your loss

I saw it on the first day, tolerated it very well.

I would recommend this film for sure.

Saw the matinee and yet the theater was FILLED.

I’d say the only part that was sorta under-done was the verrrrry stressful decision it was by McCluskey for the drive-bomber elements to Risk It All, and keep flying in search of the Japanese fleet, while super low on fuel.

And it all paid off.

They did soooorta touch it, but that one point really needed to be nailed totally and they just sorta knicked it.

Perhaps some could argue about the technical aspects of certain scenes....but overall it was a money well spent, it’s historically accurate with very few corners cut...

I saw it on Sunday morning, paid $9/ticket got a nice big soft recliner to sit in...

The CGI actions scenes were okay...

On this Veteran’s Day Weekend, it’s solid choice, if you are on the fence, go see it, you should enjoy it.

The only other objection I had:

They didn’t know that AF was Midway and when they later confirmed that it was, in fact that was a very deliberate ploy they hatched, in order to do that.

The guy at Midway who broadcast that in the clear was totally baffled and not at all inclined to do it, but because it was so critical that it be sent, there was another unusually senior person, there, on the transmittor’s elbow, making damned sure that it was sent.

They didn’t make that clear.

I am going to go see it, but...I can’t fault people who doubt Hollywood would do it justice, naysay it because they predict it would be turned into some politically correct piece of crap, or be a negative nabob because Hollywood has a history of being untruthful, willfully or intentionally ignorant, or downright disrespectful towards the military.

I can’t fault my fellow Freepers in the same way I don’t fault Charlie Brown for assuming Lucy is going to pull that football away.

Because she does pull it away nearly every time.

I almost never go see Hollywood military themed movies any more unless I can get it from the library later and watch it. Been burned too many times.

But it is nice to hear this one may be different.

Finally, a bit of good news. Washington may be a cesspit, but normal Americans haven’t entirely lost their bearings.

I read somewhere that on one of the movie rating sites (Rotten Tomatoes, maybe), audiences were 90 percent positive, while critics only 40 percent.

Well, that figures, since most movie critics are probably America-hating sodomites.

I heard that Vets get in FREE on Vets day....anyone know the truth??

What I was verrrrry thankful for:

Not saying it was right wing, I’m just saying there wasn’t the typical stuff:

Vaguely homo pilot/gunner romance, super sexy chick in a bodysuit flipping her hair around as she knocks-out CIA contractors, “Love fighting the honorable Japanese, yet I’m so ashamed THAT I’M WHITE..!”

None of that stuff AT ALL.

What a weird relief.

I love WW2 movies, showing a time when America pulled together even though their military was very limited in men and material when the war started. I generally won’t watch a movie about Vietnam because I lived through that time and the way it tore apart our country.

I saw it last night with some of my kids.

My PC detector was turned up to max, and I found none.

In fact, it was less PC than the Charlton Heston version, with the stupid subplot about the Japanese girlfriend.

It won’t satisfy people with Shattered Sword level knowledge of the battle, but it was good enough that you should go see it.

I was sad on the way home as I realized that that wonderful America is dead and buried, and won’t be coming back. 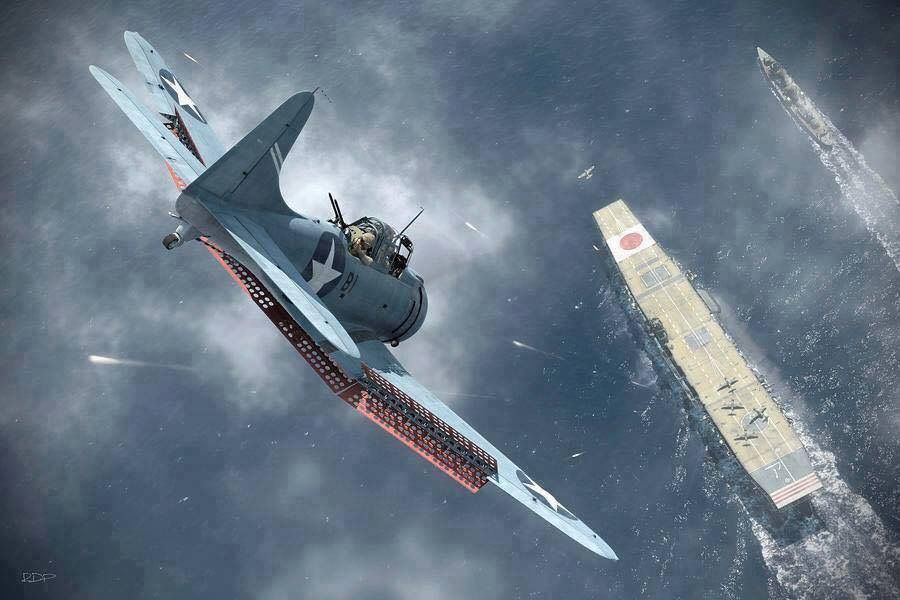 I understood the point of broadcasting about the water situation on Midway was to trick the Japanese into passing that info on, using the designation AF, so they could verify that it was Midway. Was that not correct.

I was upset that McCluskey was not portrayed by a Black lesbian, so I am boycotting the racist film.

Hubby and I saw it the other day. Great movie and very happy with it’s portrayal.

When the “expert critics” say a movie is great, you can sure it is a pervert creep-fest.

When the guys first found the fleet, they all got buck fever so hard and fast that they ALL angrily pounced on the very first carrier.

But there were FOUR Jap carriers, right..?

That meant that first guy would get sunk 20 times over, with no US bombs left for the rest of the three perps.

It was only the foresight of one American pilot caught up in that first frenzied, crowded dive that pried some of the other guys off that first, frenzied gang-bang.

He pried them off at the last second and properly re-distributed them onto the other remaining carriers.

By great luck the last carrier kill of the first 3 destroyed ended up totally destroyed by just ONE bomb, and it was the last bomb remaining.

That was because of the wild success of that first sinking, which I think involved over 9 bombs, 5 hits.

I agree about not wanting to support Hollywood's PC BS in movies. but when one comes along that celebrates American heroism, it deserves to be supported IMO. I found nothing PC about the movie. and it was nice to see the heroes portrayed as real men, and not metrosexual wimps.

Midway is not really a Hollywood movie per se. Roland Emmerich has been trying to get it made for close to 20 years, but no studio wanted to do it. The financing comes from a variety of sources, so it is essentially an independent film.

19 posted on 11/11/2019 11:13:30 AM PST by Sans-Culotte (With every passing day, I am a little bit gladder that Romney lost in 2012.)
[ Post Reply | Private Reply | To 6 | View Replies]
To: Savage Rider
I understood the point of broadcasting about the water situation on Midway was to trick the Japanese into passing that info on, using the designation AF, so they could verify that it was Midway. Was that not correct.

The film gave the impression that the broadcast of, "Our water distillation has broken down..!" had not been a very deliberate US ruse, specifically in order to get the AF location info from the Japanese.