Influential Stanford Study Of Psychiatric Hospitals May Have Been Fabricated
Hotair.com ^ | 11-4-19 | John Sexton

Stanford professor David Rosenhan wanted to prove that psychiatric hospitals of his day would instantly label and mistreat even the mildest of symptoms, so he convinced a group of students to go undercover at various hospitals and then wrote an influential study about the results. Rosenhan’s paper “On Being Sane in Insane Places” was published in the journal Science in 1973 and had a big impact at the time.

Rosenhan’s eight healthy pseudopatients allegedly each followed the same script to gain admittance to psychiatric hospitals around the country. They each told doctors that they heard voices that said, “Thud, empty, hollow.” Based on this one symptom alone, the study claimed, all of the pseudopatients were diagnosed with a mental illness — mostly schizophrenia.

And once they were labeled with a mental illness, it became impossible to prove otherwise. All eight were kept hospitalized for an average of 19 days — with the longest staying an unimaginable 52. They each left “against medical advice,” meaning the doctors believed that they were too sick to leave. A total of 2,100 pills — serious psychiatric drugs — were reportedly prescribed to these otherwise healthy individuals.

At the time, the collective American imagination was deeply suspicious of psychiatry and its institutions. It was the era of Ken Kesey’s “One Flew Over the Cuckoo’s Nest” and movies like “Shock Corridor” and “The Snake Pit.” Rosenhan — who was both an insider who studied abnormal psychology, and an outsider who was a psychologist rather than a psychiatrist — was the perfect person to pull back the curtain on psychiatry’s secrets.

Author Sussana Cahalan heard about the study by accident and began looking into it. She wanted to find out why Rosenhan had never finished the book he was paid to write about it or why he never again revisited the topic in any subsequent paper. What she discovered was a shock to her. Rosenhan counted his own experience among the eight people mentioned in the study, but he misrepresented that experience in order to make it appear the hospital had overreacted to his presentation:

Rosenhan’s medical record during his undercover stay at Haverford found that he had not, as he had written in his published paper, only exhibited one symptom of “thud, empty, hollow.” Instead, he had told doctors that he put a “copper pot” up to his ears to drown out the noises and that he had been suicidal. This was a far more severe — and legitimately concerning — description of his illness than he had portrayed in his paper.

Obviously there’s a big difference between hearing non-distinct voices and telling people you are suicidal because you can’t stop the voices unless you put copper pots over your ears. One is worrisome, the other is life-threatening.

But that wasn’t the most surprising part of what Cahalan found. After months investigating, she was unable to locate most of the other “pseudopatients” mentioned in Rosenhan’s paper. She did identify one of them. His name is Bill Underwood and his experience did match the claims in Rosenhan’s study. But the other six pseudopatients don’t seem to exist. She speculates that may be why Rosenhan never finished the book he was contracted to write and in fact never wrote about the topic again.

Cahalan did identify another student who participated in the study but Harry Lando was dropped because his experience didn’t match what Rosenhan was looking for:

Lando had summed up his 19-day hospitalization at the US Public Health Service Hospital in San Francisco in one word: “positive.”

Even though he too was misdiagnosed with schizophrenia, Lando felt it was a healing environment that helped people get better.

“The hospital seemed to have a calming effect. Someone might come in agitated and then fairly quickly they would tend to calm down. It was a benign environment,” Lando, now a psychology professor at the University of Minnesota, recalled in an interview.

But instead of incorporating Lando into the study, Rosenhan dropped him from it.

Cahalan argues that Rosenhan was probably right about the conditions at many psychiatric hospitals in the early 70s, but that’s obviously not an excuse for inventing data. She has written a book about her findings titled “The Great Pretender” which will be published tomorrow.

It has been a tough couple of years for influential studies. Last year an expose of the famous Stanford Prison Experiment revealed that the participants were coached. One of the most famous moments from the experiment, in which a student playing an inmate appears to have a mental breakdown, was revealed to be bad acting by the participant: “If you listen to the tape, it’s not subtle. I’m not that good at acting.” And one of the guards who began getting tough with the “prisoners” admitted his own performance was based on a character from the film Cool Hand Luke.

Just last month another influential study that claimed to demonstrate gender bias through “blind auditions” for orchestras was debunked and shown to not really support the conclusions the authors, and especially the media, made for it. That study was cited more than 1,500 times and mentioned by Justice Ruth Bader Ginsburg in a dissent.

TOPICS: Culture/Society; News/Current Events; Politics/Elections
KEYWORDS: peerreview; professors; sciencetrust; scientificstudies
This is another example of how university professors deliberately submit corrupt research in order to try to substantiate their preconceived ideas. They win fame and status (and tenure and more federal grants) as they lie to everyone. These professors are not purely pursuing truth. They have an agenda and often it is very self-serving. Even though their results are published in peer-reviewed journals, that does not mean that their results are necessarily valid. The same thing is happening with climate change. Think especially of Michael Mann and the East Anglia University emails to "hide the decline." We can't trust the liberal scientists and professors. They have repeatedly demonstrated that they are not worthy of our trust.
1 posted on 11/04/2019 9:39:07 PM PST by DeweyCA
[ Post Reply | Private Reply | View Replies]
To: DeweyCA

Academic feminists pushed pretty hard to shut down the asylums. They said that it was too easy for husbands to commit their wives to those places, and they’d watched too many movies about women who were stuck in them.

Psychs. also pushed to have them closed, because they didn’t want to work in them. They wanted to work in offices with drugged outpatient clients instead.

So Climate Change is not the first case of Contrived Urgency
meant to attract funding and greater academic influence.
Of course, in the late 70’s and 80’s, I used to hear things about pediatrician Dr. Spock too. People began to question his techniques because the outcome was often not expected and not at all helpful to the family dynamic.

Yep. so stanford inmate experiment was a fraud too. Great.

All the left does is lie.

I was in psych a few times after head injury in the first few years.

I went in because the headaches were so severe I was afraid to be alone. I “rejuvenated” in them about every six months for two years.

What were they supposed to do?? It’s not like an X ray or MRI will PROVE i’m afraid of ending it all due to pain.

And it’s actually NOT HARD AT ALL to get out.

I saw BAD suicide attempts, a guy who slashed his face and neck apart like something from a horror movie...be let out after 2 weeks.

It wasn’t that bad. They served bologna sandwiches and snacks at 9:30pm every night :)

The human suffering is awful. The staff generally good and caring people.

Heartbreaking to see 18 and 20 year olds who will never really be ok.

Rigoberta Menchu (I was a little suspicious of her from the start).
Half of all marriages end in divorce.
Standford Prison Experiment.
Rosenhan experiment.

What I learned that is still true: there is a lot of fraud in academia and science.

Now tell us about all the faked studies pushing prozac and
electric shock ‘treatment.’

One of the hardest things in any medical practice is to tell when a patient is feigning illness. It is even harder when you are coached by a expert in the field. This is why I doubt the participants (if they exist) only said they had a mild auditory hallucination.

I’ve BEEN in lots of pain but MRI showed some white dots on brain and nothing that should cause pain.

But TOO MANY folks fake it for disability purposes.

then they get caught playing tackle football some weeks later :)

Wow, this story is just crazy.

One of the hardest things in any medical practice is to tell when a patient is feigning illness. It is even harder when you are coached by a expert in the field. This is why I doubt the participants (if they exist) only said they had a mild auditory hallucination.
_________________________________________
I have had 2 relatives diagnosed schizophrenic. One, 50 years ago, was hospitalized several times. His symptoms ranged between being convinced his wife was cheating on him to getting instructions nightly from Johnny Carson. He was always released and it was suggested he be separated from female relatives.

The other,within the past 30 years diagnosed Bi-polar, heard voices telling him to ESAD. Hospitalized after a suicide attempt, years of cognitive therapy, lifetime of lithium et al.

Both lived independently. The second one allowed to continue practicing medicine. Neither was faking and it seems both were helped.

I say whoa right there. Just because the author couldn't find them, doesn't mean they didn't exist. I wouldn't rule out that the author is maybe projecting some of hos his own inadequacies on the study.

Follow the money. Always. It’s how they do it.

We have a niece who we suspect has been feigning illness for many many years. It’s gone beyond the pale now. We are really beginning to think she has Münchausen syndrome. No one knows what to do. She has hurt a lot of people.

The nice thing about places like that, is that you can kind of shift into cruise control, and not have to make decisions.

For the days you’re in there, you can sit back, relax, and organize your thoughts without friends and family telling you how you need to think, what you should be thinking.

If you go with the program and avoid entangling with the folks who clearly have issues, it can be a decent experience. 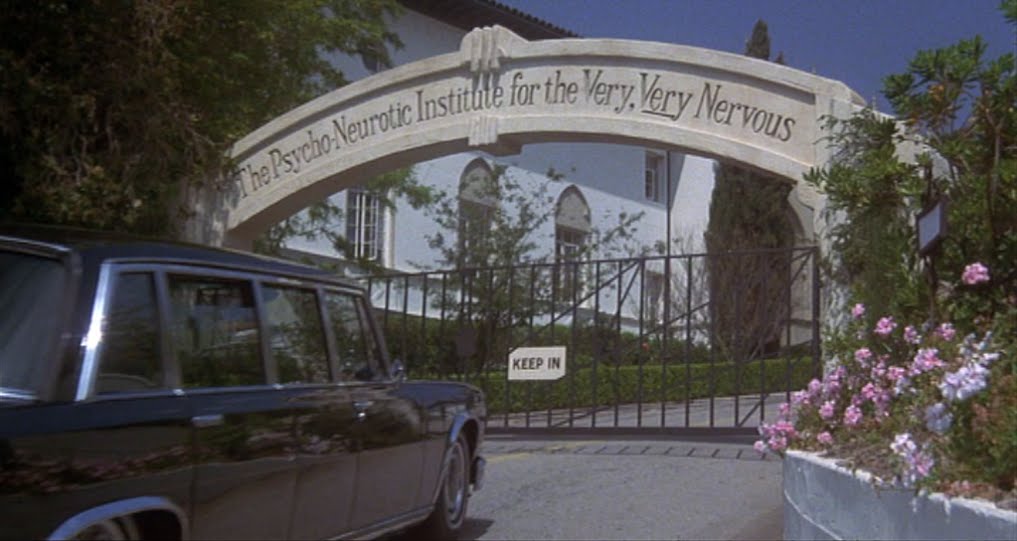