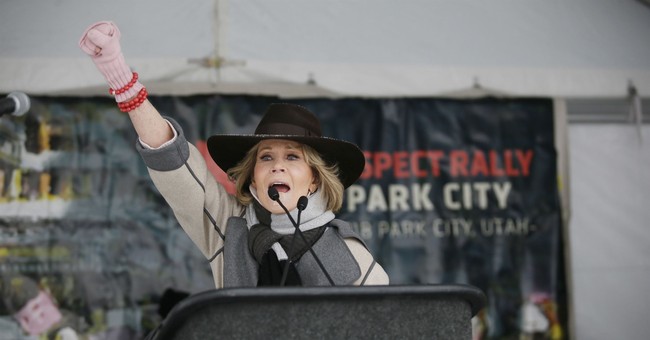 One of the strangest things about liberals is how they think getting arrested is some kind of achievement. Take Jane Fonda, who, at the tender age of 81, is still ranting about capitalist America ruining the world. Only this time, the issue is "climate change" instead of the Cold War.

"Hanoi Jane" infamously sat behind a communist antiaircraft gun in Vietnam in 1972, and today, one could imagine her aiming her big gun at commercial aircraft ruining the planet with their notorious carbon emissions.

Naturally, liberal journalists are delighted. On Oct. 25, the Hollywood Reporter gushed over her third arrest on Capitol Hill. This time, actor Ted Danson was arrested alongside her. The Reporter included a pile of happy play-by-play tweets (including video tweets) by Hannah Jewell of The Washington Post. She seemed to be on a first-name basis with the socialist actress.

-- "Jane just asked a group of very buttoned up college kids on a capitol visit if they wanted to join her," she tweeted. "Ted Danson added that getting arrested 'sharpens the mind.'" (Insert laugh track here.)

This is nothing but an exercise in political vanity. Getting arrested sounds all naughty and risky -- but there are no risks. The Capitol Police does not allow demonstrations on the Capitol grounds without a permit, so these leftists come unauthorized and play Martin Luther King for a day -- unauthorized but not unannounced. Press attention (and adulation) is everything, so they make sure everyone knows they're coming. Protesters are put in single-use plastic handcuffs and usually taken to the Capitol Police garage. Fonda isn't sitting in jail over the weekend. No one's fining her $1,000 for the trouble.

When Fonda was first arrested, on Oct. 14, the network morning shows were predictable stenographers to leftist protest.

On "CBS This Morning," Saturday co-host Michelle Miller proclaimed: "Oscar-winning actress and long-time activist Jane Fonda is hoping her latest role will make a lasting impression. Fonda was one of 16 people arrested outside the U.S. Capitol Friday while peacefully protesting climate change." She quoted Fonda as calling the state of the warming planet "a collective crisis that demands collective action."

This is not an actual demonstration of science.

Jewell also quoted Fonda: "'There was a time when there was no plastic' says Jane, 'and we did just fine.'" (Plastic was invented before she was born but popularized in the 1960s I believe)."

ScienceHistory.org says the first fully synthetic plastic was invented in 1907 and became widely utilized in World War II. The left began ) protesting plastics in the '60s, so that's how liberal millennials at The Washington Post guess it all started.

Science isn't really the point. Passing a Green New Deal that takes over what remains of American capitalism is the point. Left-wing radicals haven't changed their authoritarian agenda one bit since their glory days of rooting against America in Vietnam. Jane Fonda is the same self-absorbed dilettante that she was in 1972 ... and she's still celebrated for it.

But here's a red brick of reality: It ain't working. The purpose of this form of political activism is to create a national movement that supports it and emulates it. All the media adulation aside, the public doesn't care what these two old people, with all their expensive plastic surgery, are doing. Jane got arrested. Nothing. She got herself re-arrested. Nothing. She brought in Ted. Double nothing.

What a waste of good plastic.

Treasonous bitch never did move to a Communist nation to kiss the ground as she insisted Americans would if they were to submit to Communist rule and lean what it “really” is.

For decades, I’ve wanted to see that traitor arrested, but I want it to be real. Getting arrested for trivial and only because it’s the only way a man will touch her doesn’t count.

Long in the tooth with lovely pink, recent, surgical scars from yet another face lift,Hanoi Jane is still seeking to become a geriatric bendover girl, yet again , for the Stalinists .

She is in her element, protesting patriotism and the Constitution. Soon she too will croak, and it will thankfully be one less screaming emotional whining liberal fascist voice.

Its so wonderful that Jane is willing to share the many millions she has for the benefit of the underprivileged.

May her totalitarian Utopian wet dreams never see even an instant of realization.

Jane you need to step it up. Please resist arrest today at your crime site.

Her visage reminds me a little of The Picture of Dorian Gray.

They had better creamate that bitch when she dies or at least put a porta potty on her grave.

Why do I get the feeling that for all her admiration of Communism, Jane has probably spent hundreds of thousands of dollars over the years for the best tax and estate planning advice to maximize her wealth and that of her family and heirs?

Where’s the stunt where she curls up and goes back into the sewer she came from?

The police should make a mistake next Friday and keep her locked up til she sees the judge on Monday. I would love to see her freak out for being treated like most regular people. She’s an embarrassment.

Hey that’s a great picture of Jane! She looks just like Dr. Strangelove!

She should have been executed many, many years ago. She’s be considered to be a martyr, but at least she’d be a DEAD martyr. What a disgusting, filthy piece of garbage. 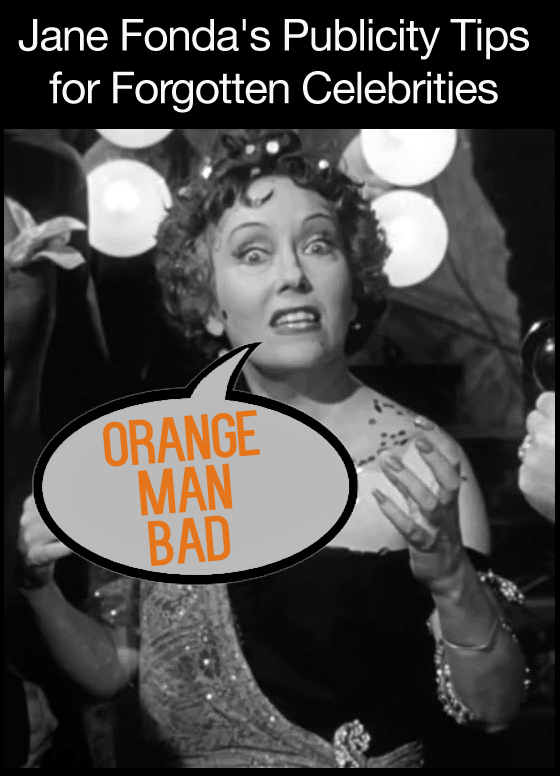 That said, perhaps if she were hanged that would solve both problems.

Forgive me. I couldn’t resist.

Speaking of her generous travel budget, based on the banner behind the b***h it appears to indicate her presence at the picture taking time, to be in Park City, UT. A town that fits her to a T. It’s liberalville.

As much as she Hanoi Jane likes to fantasize it, she is about as proletarian as George Soros and his millions.

Yet there she is, like a cracked, croaking record, manning the comfortable barricades of the left wing wealthy totalitarian Utopians, who are goaded on by none other than the former community organizer president of dirty name.

Does she not, after all those years, have anything better to do?