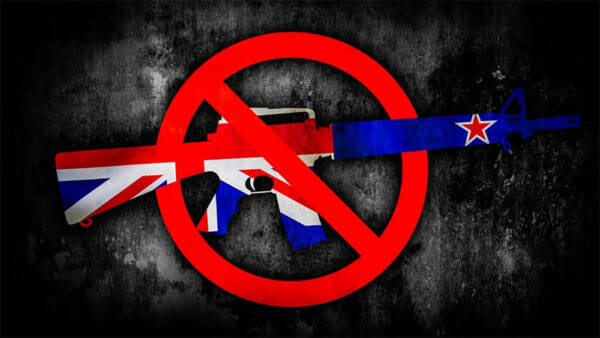 New Zealand –-(Ammoland.com)- New Zealand has had relatively moderate firearms restrictions for most of its existence. As an extremely peaceful nation that evolved from the conflict between a collection of warring, cannibalistic tribes and the British Empire, it is a very successful nation. From 200 years ago to the 1990s, it was dominated by farmers and hunters.  New Zealand has a proud tradition of military prowess on both the Maori and British sides of its ancestry. The English pioneered the concept of individual rights in the modern era. Those rights were transferred to settlers in the English colonies. The English colonies also pioneered the modern version of gun control, in order to keep the natives subjugated.

With peace, prosperity, urbanization, and protection from invasion by the American nuclear umbrella, New Zealand has forgotten the days in 1940-43, when Kiwi yeomen prepared to repel a Japanese invasion with axes and crowbars.  Most military-aged men had gone to war to protect the British Empire. The reserve ammunition supply was sunk by a German merchant raider on its way to England, just outside of Whangarei, in New Zealand waters, on 19 June 1940. The ammunition was desperately needed to resupply the English homeland after Dunkirk.

England said it had its hands full. No help would come from the homeland. America did not enter the war until December of 1941.

While a restrictive gun registration regime was imposed after the war, it was mostly ignored. The police found it to be expensive and without merit. It was done away with in 1983, in favor

TOPICS: Australia/New Zealand; Foreign Affairs; News/Current Events; Politics/Elections
KEYWORDS: banglist; gunregistration; national; newzealand
After the emotional push by Western Media, the New Zealand gun owners may be able to stop the push for draconian restrictions on ownership and use of guns.
1 posted on 10/25/2019 4:56:45 AM PDT by marktwain
[ Post Reply | Private Reply | View Replies]
To: marktwain

New Zealand is an OUTDOOR country. Everyone should have a gun there.

The NZ PM was a piece of work in the wake of Christchurch. Complete Leftist SJW virtue signaling in the wake of the event, no rational discussion allowed. Motives of the shooter obfuscated by suppression of his manifesto by government edict, enforced by the threat of a trip to the slammer. 1A isn’t a thing in NZ, and of course neither is 2A. I hope they’re successful here.

NZ has the same form of cancer that Sweden has.

"Several areas of the proposed laws expect Police to be experts in firearms. Police are not. A Police officer was just shot in the bum. My own arms officer blew out the station window with a firearm. The officer who vetted me was only shot at once in his career – by another officer. A uniform does not an expert make."

Can easily be changed to what is happening here in the Good old U.S.A.

***The ammunition was desperately needed to resupply the English homeland after Dunkirk.***

So they came crawling to the US begging...”PLEASE SEND A GUN TO DEFEND A BRITISH HOME!”

However, for two years the British Empire was all that stood between NAZI Germany and world domination.

Nearly everyone expected the British to seek terms after the fall of France.

Most English politicians did.

Churchill refused to admit defeat. His strategy: Get America into the war.

After listening to the most comprehensive biography of Churchill, I lost my admiration for the man.

After saying that, it took an arrogant, genius, talented jerk such as Churchill to hold on until America was brought into the war by Japan.

***until America was brought into the war by Japan. ***

The Germans were not happy about this! They were hoping for a Japanese attack on Russian ports in East Asia.

Yes, and then Germany (Hitler) declared war on the U.S.A.!

Things would have been a lot different if they had not declared war on the U.S.A.!

It appears the Japanese and the Germans were indifferent allies.

10 posted on 10/25/2019 8:12:36 AM PDT by marktwain (President Trump and his supporters are the Resistance. His opponents are the Reactionaries.)
[ Post Reply | Private Reply | To 9 | View Replies]
To: marktwain
Things would have been a lot different if they had not declared war on the U.S.A.!

It sure would have been a lot harder for FDR to get us into the European war. I was just a pre-teen then but distinctly remember the WHITE HOT RAGE against Japan after Pearl Harbor. Even all of my dad's America First buddies spun on a dime and were all for war, just not with Germany, which was "The European's problem. We have our own with the Japs."

Hitler, for whatever reason, solved FDR's conundrum on Dec. 10th.

I’m no ww2 historian but what you said makes me wonder if Japan would have been more successful attacking Russia and solidifying gains and conquests ultimately ending up with more power and retaining their warlike culture by the time ww2 ended.