“An electrifying experience” is a great way to describe being at a Trump rally. Part of it is just spending time with other patriotic Americans proudly proclaiming love for America and optimistic hope for the future.

Thanks for your report!!!! Please keep us posted on the result of the Governor’s primary today.

Honored to have your first post directed to me. Hoping you post long and often. Sorry to hear about the Trooper who died in the line of duty.

I'm not from LC, but in the late 90s, I used to put in under the I10 bridge and fished from the saltwater barrier to the gulf, the Mermentau to the rigs 30 miles out, and the Sabine at Orange to the mouth and up Black Bayou for bass. Duck hunted near Vinton and in the marshes below Grand Chenier. Ate many times at Steamboat Bill's who used to serve some mighty tasty crawfish.

Many fond memories of friends, good times, and food in that part of Louisiana!

We need more great folks like you and your wife! 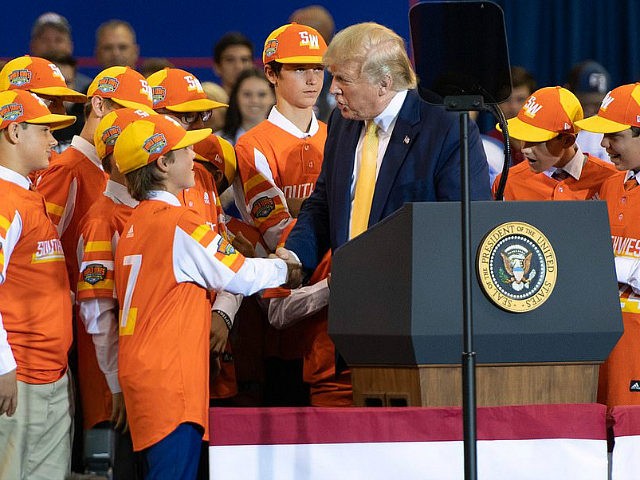 Thank you.....Trump knows he can be Trump just as he is with his supporters and nobody will tell him to be otherwise as they know the unfair hits he’s taking...though it’s always good his front row advisors steer him back to the information we need to know as well....like Phase I of his China deal etc. As I see it his rallies are well rounded, we get to see and hear the man and equally so The President of and for the People of our great country....

I'm just getting warmed up Don

Yeah I saw this rally too.

That’s a sweetheart honey, screen left in the pink T-shirt, just over the Presidents shoulder.

Unlike most of the haggish Dem women, some female Republican Trump supporters seem to really be lookers!

230 posted on 10/12/2019 12:02:47 PM PDT by Candor7 ((Obama Fascism)http://www.americanthinker.com/articles/2009/05/barack_obama_the_quintessentia_1.html)
[ Post Reply | Private Reply | To 1 | View Replies]
To: caww
I doubt the American public at any point in history due to both lack of the supporting technology or personality has had a president who talks in frank grown up language to people like they are adults.

Most people I know swear a little bit when discussing things with people they like. For these purveyors of perversion and media pornography to get their underwear in a bundle is disingenuous but hey if gets their blood pressure up and leads to drinking good.

What is wonderful is how president Trump has been systematically been uncovering the rocks and exposing the Obamas underneath.

Never forget this moment when a black bishop anoints our white knight king.

God works in mysterious ways and it seems like he using this man, he is so creative and tough, now he got crazy powers. The democrats are Legion and are furious about being cast out, pushed off their hill and pulled from the purse strings of power, privilege and publishing propaganda .

His slow approach now has many seeing how the dots connect and making them think it through for themselves and have that ah ha moment and then get pissed and realize just how corrupt the Democrats, Obama and the Clinton Crime syndicates

He phrases in such a way as to be provocative and usually a deliberately ambiguous with a throw away line the insiders get - repeat the point , make it specific with an example -repeat the point.

For most people it snaps them out of their daily fog with a "the president said wha?" then they listen perhaps even then they don't agree - then it turns out he is right and brain remembers this and it changes how it works next the president slaps the citizens across the face with the truth in plain spoken words often with some biting humor.

He becomes someone they start listening to and he provides folks no shortage of opportunity - before long another Trump voter gets their wings and flies off the uniparty plantation yeeehawww - have a great weekend caww!

I live on a school route and I’ll asolutely attest to the fact the language kids speak to each other just walking to school far exceeds any language Trump uses 10 to one and this includes girls. Furthermore what goes on behind closed doors of the elite politicians and Hollywood types, which they now strut openly would cause our founders to ask us all why we tolerate it! So it’s laughable and then some when the likes of Pelosi and others critic Trump....

You have a good weekend too!