Close, wrecked out in the Iron Dog. Snow machine.

They are both good looking people, made a good couple just from the optics.

Considering the way that McCain and his cast of goons treated her, you are right, she should have refused it

That’s my call.I think they will get back together.

I sincerely hope he did not become addicted to pain killers

Sarah! Call me! I have a shoulder you can cry on.

86 posted on 09/09/2019 1:44:13 PM PDT by Buckeye Battle Cry (Progressivism is socialism. Venezuela is how it ends.)
[ Post Reply | Private Reply | To 2 | View Replies]
To: dfwgator
But Palin, basically made them leap into the arms of Obama in the end, although she did fire up the hard-core conservatives.

Without Palin, McCain would have had almost no conservatives voting for him. I was disgusted at the thought of voting for McCain. I was convinced that he was going to select Joe Lieberman as his running mate (I do believe he wanted to). Had he done so, there is no way I would have voted for him.

Looking back, I don't think it made much difference. McCain became even more loathsome in the years since the election.

I don’t mean this in a mean way, but just as an observation. At least in most cases COPS characters weren’t looking for the limelight...I think what ended up tripping the Palin’s up was that reach for the limelight with reality shows...Todd never seemed like he had much of an interest in it.

Notoriety takes a toll whether positive or negative...just have to look at Hollywood to see that.

Sorry all the poseurs on this thread, but she is fated to be the future ex-Mrs. twister881.

I think in the end there were more driven towards voting for Obama, than those who were convinced to vote for McCain, because of Palin.

Assuming McCain had a different running-mate, even so, I still think most conservatives would have held their noses than face the alternative of having Obama in the White House.

I would marry her, but then I’d have to divorce my wife, Morgan Fairchild, first.

Could be. But people also do funny things when it comes to money. Once on a flight from Racine to Chicago I was seated beside a beautiful woman, 30-ish, groomed to a fare-thee-well, etc. I struck up a conversation. Turns out she was a Regional Manager for a big insurance company, earning serious money, divorced. As we talked she mentioned that she was divorced. Old enough to be her Dad, I asked why. She replied that her husband COULD NOT stand the fact that she made more money than he did. I, myself, could handle such a case with either she or Sarah.....as long as they didn’t rub it in and remind me of it. But, there’s always two sides to every story.

Yeah, sorry to ear this. I can’t see divorcing after that many years together. Probably some reason we don’t know of.

“”I think the Midwest screeching finally got to him. Face it, Sarah is a looker but...””

I don’t know what comes after your post but I have to agree. Can’t even describe the ones here who took issue with that sentiment several years ago. It was like you had insulted their wives or their mothers.

Her voice drove me nuts! I had nothing else against her but that voice would shatter glass and THAT was when she used a microphone. No one told her it wasn’t necessary to shout. She’d be a great addition to FOX as they have some of the worst female voices in captivity..

>>I would marry her, but then I’d have to divorce my wife, Morgan Fairchild, first.<<

Yes, fully understand. Had a devil of a time splitting the sheets with Cameron Diaz some years back.

the screeching....but the ‘midwest’ thing...what is that about? 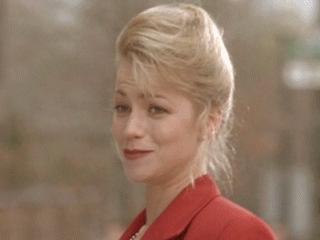 In your dreams, dfwgator boy.

I don't think you're Todd's type.