How the Left validates Islam’s sexual fantasies and victimization of Western women.

Raymond Ibrahim is a Shillman Fellow at the David Horowitz Freedom Center.

Western women are to blame for being raped by Muslim men.  Such is the latest position—the latest apologia—being offered by those Western elements dedicated to exonerating undesirable Muslim behavior, particularly in order to continue taking in more Muslim migrants.

According to a August 9, 2019 report, “in the Swedish city of Uppsala … four women were raped in as many days….  Two ‘completed rapes’ took place last weekend, with another attempted rape on Saturday night, and another sexual attack in the early hours of Wednesday morning.”

So many (reported) rapes in so brief a time span should be unsurprising considering that, since opening its doors to “multiculturalism”—which mostly means taking in male Muslim “refugees”—rapes in Sweden have increased by 1,472 percent, making it the rape capital of the world.

Although Uppsala Police failed to issue descriptions of the rapists—usually a sure sign of their origins—they did issue warnings for women to “think how they behave,” to “think ahead,” and not “go out alone” (original Swedish language report here).

Sweden is hardly the only Western European nation to implicate victims with their own rape.  In late 2018 in Germany, seven Muslim migrants raped a teenage German girl in a park, after drugging her at a disco in Freiburg.  (She at least survived; in a similar case that occurred a week earlier in Italy, the drugged rape victim was left murdered.) Freiburg’s police chief responded by warning German women not to “make yourself vulnerable by using alcohol or drugs.”

Advice against alcohol, drugs, and reckless behavior would be more welcome and sincere were it not made under duress.  As things stand, it is a copout.

For example, after mobs of Muslim migrants sexually assaulted as many as one thousand women on New Year’s Eve 2016 in Cologne, Germany, its mayor, Henriette Reker, called on women to “be better prepared, especially with the Cologne carnival coming up. For this, we will publish online guidelines that these young women can read through to prepare themselves.”

Or, as another report discussing the aforementioned rape in Freiburg puts it, “The focus on prevention is a good thing, but also shows how German authorities and media barely hold the migrant crisis responsible for the disaster that is unfolding in Germany.  Political correctness has caused officials to put the blame for the criminal acts on the women instead of Merkel’s guests.”

Similarly, in Austria, after a 20-year-old woman waiting at a bus stop in Vienna was attacked, beat, and robbed by four Muslim men—including one who “started [by] putting his hands through my hair and made it clear that in his cultural background there were hardly any blonde women”—police responded by telling the victim to dye her hair:

At first I was scared, but now I’m more angry than anything. After the attack they told me that women shouldn’t be alone on the streets after 8pm. And they also gave me other advice, telling me I should dye my hair dark and also not dress in such a provocative way. Indirectly that means I was partly to blame for what happened to me. That is a massive insult.

In Norway, Unni Wikan, a female professor of social anthropology at the University of Oslo, insists that “Norwegian women must take their share of responsibility for these rapes,” because Muslim men found their manner of dress provocative. The professor’s conclusion was not that Muslim men living in the West need to adjust to Western norms, but the exact opposite: “Norwegian women must realize that we live in a Multicultural society and adapt themselves to it.”

So much for the feminist claim that women are free to dress and behave as promiscuously and provocatively as they want—and woe to the man who dares cite this as justifying male sexual aggression.  Apparently this feminist refrain does not apply to Muslim men.

But perhaps the greater irony is that all these excuses that implicate female victims in their own rape agree with Islam’s unwavering view—on display past and present—that European women are by nature sexually promiscuous.

Consider Islamic views concerning the first “white” women encountered.  Muslims habitually portrayed neighboring Byzantine women as sexually promiscuous by nature. Thus, for Abu Uthman al-Jahiz (b. 776), an Abbasid court scholar, the females of Constantinople were the “most shameless women in the whole world”; “they find sex more enjoyable” and “are prone to adultery.” Abd al-Jabbar (b. 935), another prominent scholar, claimed that “adultery is commonplace in the cities and markets of Byzantium”—so much so that even “the nuns from the convents went out to the fortresses to offer themselves to monks.”

For all these reasons and more, Byzantine women became Islam’s “beautiful femme fatale who makes men lose their self-control,” as the author of Byzantium Viewed by the Arabs explains:

Our [Arab/Muslim] sources show not Byzantine women but writers’ images of these women, who served as symbols of the eternal female—constantly a potential threat, particularly due to blatant exaggerations of their sexual promiscuity. In our texts, Byzantine women are strongly associated with sexual immorality. . . . While the one quality that our [Muslim] sources never deny is the beauty of Byzantine women, the image that they create in describing these women is anything but beautiful. Their depictions are, occasionally, excessive, virtually caricatures, overwhelmingly negative.

Such fevered fantasies—which “are clearly far from Byzantine reality”—existed only in the minds of Muslim men. “The behavior of most women in Byzantium was a far cry from the depictions that appear in Arabic sources.”

Regardless, not only did Muslim writers/scholars fail to “revise” their opinion concerning Byzantine women; they subsequently went on to portray all white/European women encountered—including Frankish, Spanish, and Slavic women—in the same manner.

Today, little has changed (except, as shall be seen, Western responses): all European women continue to be seen as naturally promiscuous and provoking Muslim men into raping them.  Thus in the United Kingdom, a Muslim man explained to a British woman why he was raping her: “you white women are good at it.”  Another Muslim man called a 13-year-old virgin “a little white slag”—British slang for “loose, promiscuous woman”—before raping her.

Another British woman was trafficked to Morocco where she was prostituted and repeatedly raped by dozens of Muslim men.  They “made me believe I was nothing more than a slut, a white whore,” she recollects. “They treated me like a leper, apart from when they wanted sex.  I was less than human to them, I was rubbish.”

In Germany, a group of Muslim “refugees” stalked a 25-year-old woman, hurled “filthy” insults at and taunted her for sex.  They too explained their logic to her—“German girls are just there for sex”—before reaching into her blouse and groping her.  A Muslim man who almost killed his 25-year-old German victim while raping her—and shouting “Allah!”—asked afterwards if she enjoyed it.

In Austria, an “Arabic-looking man” approached a 27-year-old woman at a bus stop, pulled down his pants, and “all he could say was sex, sex, sex,” prompting the woman to scream and flee.

In Australia, a Muslim cabbie groped and insulted his female passengers, including by saying “All Australian women are sluts and deserve to be raped.”

In short, the ancient Islamic motif concerning the alleged promiscuity of European women is alive and well—irrespective of the latter’s behavior—and continues justifying the Muslim rape of Western women.

The only thing “new” is that Muslim would-be rapists can turn to those “progressive” elements that dominate Western society for cover.  For, just as “the Left” has worked long and hard to portray Islamic intolerance, violence, and terrorism as the West’s fault—because of the crusades, because of colonialism, because of Israel, because offensive cartoons—it now adds Islam’s perverted fantasies concerning Western women to the list of reasons that “provoke” Muslims to lash out.

Note: For numerous documented examples of Muslims sexually objectifying and enslaving Western women throughout history, see author’s new book, Sword and Scimitar, which also sources many of the above quotes. 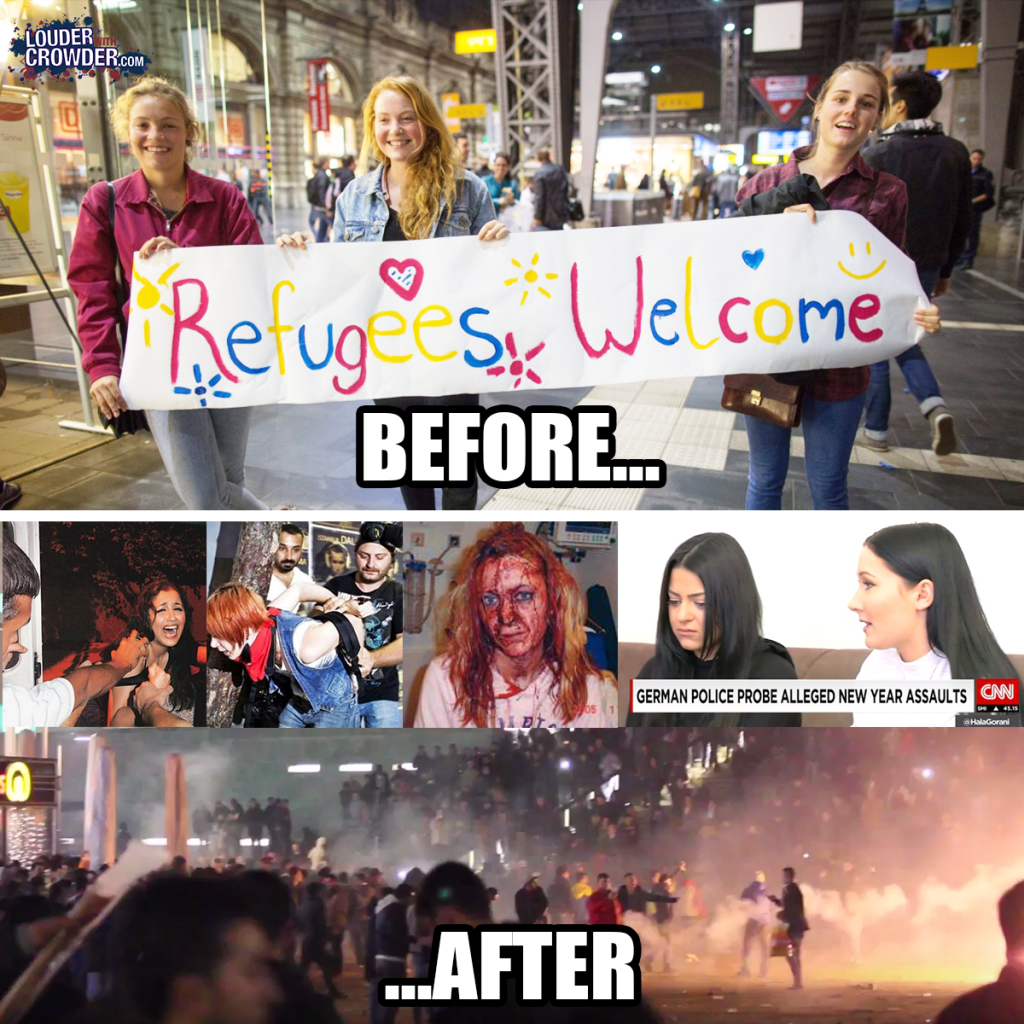 WTF? Are those Scandinavian Ragnars also feminized there? Where are the sons of Odin? Its either Shields up or pussy hats!

#metoo and “I believe her” except:

If democrats do it
If muslims do it

Islam and the Left despise Christianity. Both are a definite threat to our general well-being.

The men must be jealous.

The MSM has failed to ask Gloria Steinem her opinion.

Infidel women are there for the taking of muslim men.

It’s in their book.

“So a boy can’t even touch a girl without being branded a sexual predator but Muslim men can rape and that’s OK?”

If you’re on the left, yes.

That’s NOT an option... either to the Left OR islam.

Yes. They voted (and continue) to vote for this crap. So do the raped women.

A few years ago, in the wake of the Alexandra Mehzer slaying, Stockholm "children" were clubbed by a gang of hundreds of baton-wielding men wearing balaclavas/ski masks and black clothing.

That sort of bludgeoning attack is a good dry run for a followup with machetes, but it hasn't happened. It should happen daily until the "children" are gone.

Agreed! Even the most casual reading of the book explains the “””wonderful”””</s> history of the cult as well as the continual havoc it wreaks.