CNN’s description suggests the event may be closer to Greta Thunberg’s “I Want You to Panic” approach than a level-headed analysis.

Ten Democratic presidential candidates will square off in New York on Wednesday, fielding questions as part of a seven-hour telecast (yes, seven hours) that CNN is billing as an “unprecedented prime-time event focused on the climate crisis.”

Though questions will come from members of the audience, CNN’s description of the event offers some indication of what questions viewers can expect.

In his preview of the town hall-style event, CNN senior analyst Mark Preston writes that global warming “would cause coastal cities to disappear underwater, leaving hundreds of millions of people displaced and forced to migrate to dry areas.”Here are four climate change-related questions audience members should consider asking. Because of this, Preston says, the UN warns that governments must take "rapid, far-reaching and unprecedented changes in all aspects of society."

Whether questions that do not accept these premises—that global warming is a crisis and only governments can fix it—will be entertained remains to be seen. But CNN’s description suggests the event may be closer Greta Thunberg’s “I Want You to Panic” approach to climate change than level-headed analysis that explores the costs and benefits of inaction and action on climate change.

Regardless of CNN’s approach to the issue, here are four climate change-related questions audience members should consider asking.

1. If climate change is a dire threat, why do Democrats reject nuclear power? Nuclear energy is safe, comparatively cheap, reliable, and generates zero greenhouse gasses. For this reason, the Union of Concerned Scientists has said nuclear energy is necessary to address climate change. It’s already a proven solution to CO2 emissions. France and Sweden, two nations that have far lower per capita carbon emission rates than the US, rely heavily on nuclear power, generating 72 percent and 42 percent of their energy from it, respectively. The US, on the other hand, generates just 20 percent of its power from nuclear energy.

Despite its efficiency and low-cost, prominent Green New Deal plans from Rep. Alexandria Ocasio-Cortez and Sen. Bernie Sanders either reject expanding US nuclear capacity or propose phasing it out entirely.

2. Are less-invasive climate change solutions like planting more trees preferable to government regulations and taxes? A new study in Science magazine says one solution to the fears surrounding CO2 emissions is surprisingly simple: plant more trees. The study says that increasing the planet’s forests by an area the size of the United States “has the potential to cut the atmospheric carbon pool by about 25%.”

That is no small order since we’re talking about an area more than five percent of the Earth’s land surface area. Yet it’s likely far more achievable than becoming a CO2-free economy by 2050.

Assuming it could be achieved, would an international policy dedicated to increasing forestation not be preferable to taxing CO2?

3. Are you aware that climate-related deaths are today at historic lows and why that is? The environmentalist Dr. Bjorn Lomborg points out that since the 1920s, atmospheric CO2 concentrations increased by about 30 percent to more than 400 ppm, and global average temps increased by roughly 1°C. Yet during that same timeframe, climate-related deaths plummeted by 99 percent.

The reason for this is that people in wealthier nations are more resistant to climate-related deaths than people in poorer nations, and the 20th century saw an unprecedented increase in economic growth (see below). This suggests the best way to protect people from climate change is with economic growth, not austerity. As it happens, the “socio-economic pathways” (SSPs) literature makes it clear that the most abundant future is one that relies on fossil fuels and free markets.

4. Do you believe Americans could stay warm without fossil fuels? About 65 percent of all electricity in the US is generated by fossil fuels, according to the Energy Information Administration. This actually increases during the coldest months of the year. During cold snaps, according to the Department of Energy, independent system operators (ISOs) can depend on coal, nuclear, and natural gas for more than 80 percent of the electricity they generate.

Most parts of the country, however, aren’t heated with electric power. Natural gas—a fossil fuel—is the primary fuel for warming homes in most parts of the country by a wide margin. Kerosene and fuel oil also account for a sizable portion in some parts of the country. On a continent of about 3.8 million square miles that sees temps reach as low as 13 degrees Fahrenheit in Atlanta and -4 degrees in New York City, fossil fuels are what fight the freeze, keeping hundreds of millions of Americans warm during the coldest months.

Why is CNN driving viewers away from political stunts like this? (shaking head)

5.) If climate change is a dire threat, why did Obama just buy Oceanfront property in the Vineyard only a few feet above sea level.

The planet would be a much nicer place to live with CO2 at about 1000 PPM compared to the current 400 PPM.

We are in a CO2 Drought.

1. Are you aware of the FACT that if China and India do nothing, then it absolutely does not matter what anyone else does?

2. Are you aware of the FACT that China and India are COMMITTED to doing NOTHING until after 2040, long after the 12 year countdown?

[[3. Are you aware that climate-related deaths are today at historic lows]]

Hmmm- CO2 has been over 1000 ppm in past- and people are afraid of only roughly 400 ppm? Grow up snowflakes-

[[a fossil fuel—is the primary fuel for warming homes in most parts of the country by a wide margin.]]

So? CO2 by man amounts ot less than 0.00136% of the atmosphere- We’re NOT destroying our planet with CO2- Everyone can calm down- we have at least 1007 more years left- likely much more- God will destroy this planet and create a new one- but before He does- the tribulation has to happen, and then a 1000 year reign of Christ- The climate is just fine- it’s varying naturally, just like it always has- enjoy the warmer climate- it likely won’t last very long-

They don’t want a solution. They want to control us completely.

I’m not going to hear any of the questions. Or answers.

“Obama Oceanfront property in the Vineyard”

I’m hoping Dorian stays intact enough to stop by the Ooob property and say “hey” in a significant way.

That would be a huge “winning” out of the Trump Palm Beach properties being mostly unscathed a few days earlier.

1) What is the correct global temperature?
2) What’s worse, warmer or colder?
3) Do you know we are actually in an ice age?
4) Do you know the earth has only been in ice age status about a quarter of the the time there has been life on the planet?

I wont be watching.

Anyone who does, I propose two drinking games. Divide the room up into the following

Group 1 drinks whenever they examine whether (or how much) CO2 actually creates a greenhouse effect, let alone a perminent contributor to unnatural climate change.

I’m going to have to disagree with you there. I live in Southern California and the weather here is fine as is. You want to live in a warmer climate, move south. Don’t broil those of us who already live in warm areas.

What, all six of them?

Question #5: Why did the last ice age go away when there were no cars, factories or humans to warm the earth?

Thing is, CO2 doesn’t make it warmer. CO2 increase is CAUSED by warmer weather, not “the” cause of it.

When it’s cold, the oceans suck up the CO2. When it warms up, they release it.

17 posted on 09/04/2019 11:22:51 AM PDT by cuban leaf (We're living in Dr. Zhivago but without the love triangle)
[ Post Reply | Private Reply | To 14 | View Replies]
To: gattaca
Anybody who wants a real hoot can go look at what the climate hoaxers have to say about 'forcings', which seem to be entirely a product of the climate 'computer models'.

Climate hoaxers have no shame whatever.

How does anyone know that the same process that happened then is not happening now.

AOC's answer: "That's easy. In ancient times, humans had more meat in their diet, so the animals in the field farting too much and heated up the planet." 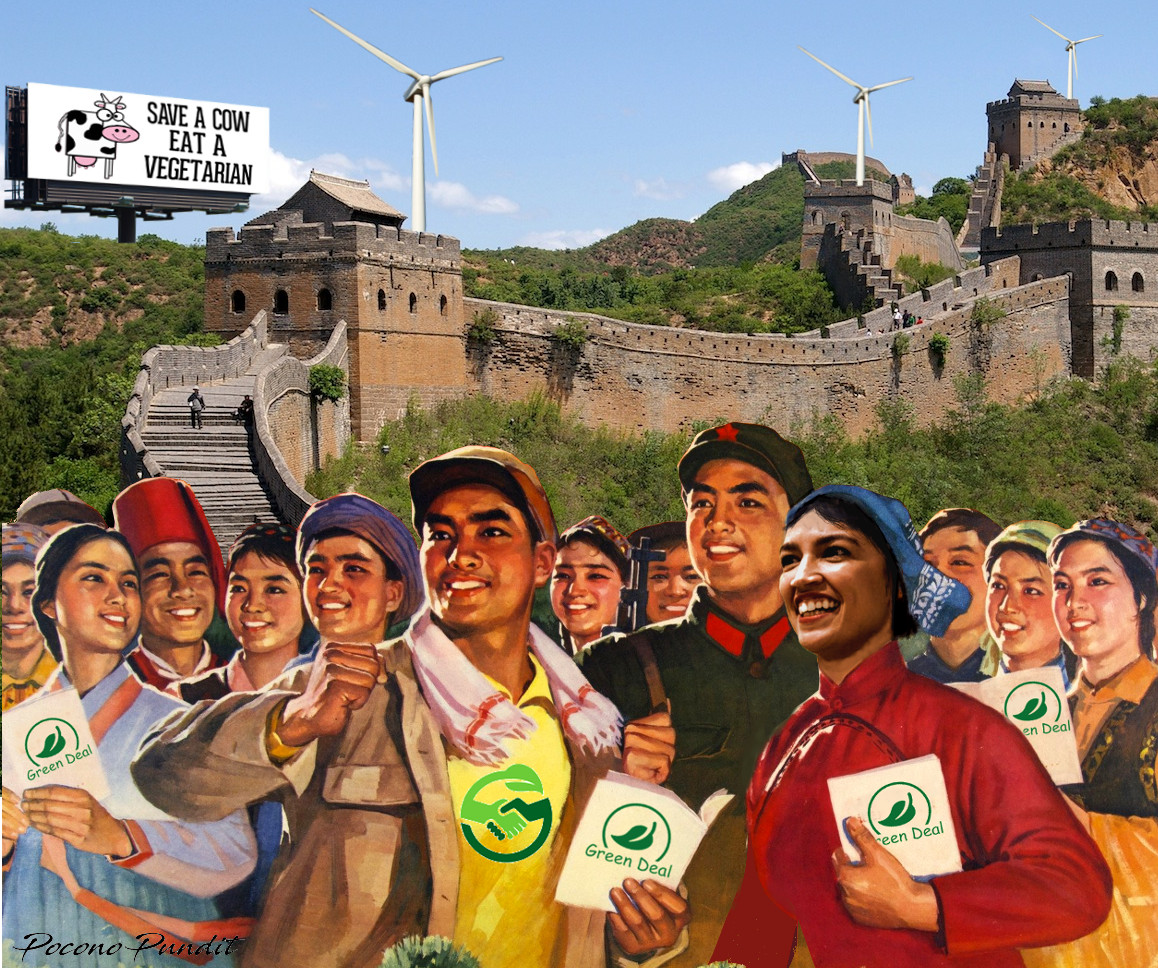