Former Sen. Al Franken says he “absolutely” regrets his December 2017 resignation over a sexual misconduct scandal — and some of the senators who’d pressed him to quit are also questioning their actions.

“I can’t go anywhere without people reminding me of this, usually with some version of ‘You shouldn’t have resigned,’” Franken, the former “Saturday Night Live” funnyman-turned-politician, said in a lengthy look back at the incident in The New Yorker.

“Yup,” was his usual reply, he told the magazine.

Pressed on whether he means it, he adds: “Oh, yeah. Absolutely.”

Leeann Tweeden, a conservative talk-radio host, had accused Franken of having forced an unwanted kiss on her during a 2006 USO tour, and several other women came forward with lurid tales of the Democrat forcibly kissing or fondling them.

As the #MeToo movement was gaining steam, several senators quickly called for Franken’s head, including New York’s Kirsten Gillibrand, now seeking the Democratic presidential nomination, who does not regret her calls for him to quit.

But others do, including Sen. Patrick Leahy (D-Vt.), who told the magazine his decision to oust Franken without a thorough investigation was “one of the biggest mistakes I’ve made” in his Senate career.

Al you should never had run for Congress in the first place.

He should not have resigned over something so stupid.

He ought to have been jailed for stealing the election in the first place.

LOL! What a fricken’ loser. Hahahaha.

Al looks like a chump now that he’s seen everybody else get away with their far more serious crimes. 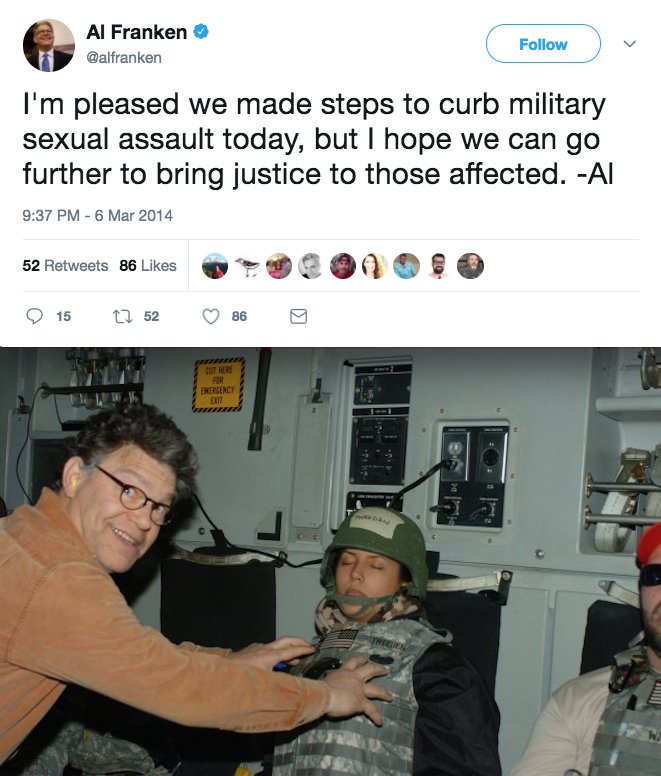 Let this eat at you forever, Al.

No worries. The smug leftists will put him right back where he was. And congratulate each other on how forgiving and progressive they are.

The ‘metoo’ movement was only suppose to take down Republicans... So the corrupt press wasn’t able to cover for him like they’ve done for so many democrats in the past - from Kennedy to Clinton to Edwards to Epstein...

Certainly there was no loss other than putting another feminist in the Senate. It was a Nothing-burger from the word go.

Then run for president Al Franken. You would be perfect.

The whole Franken thing was meant to hurt Trump in a sort of “we Democrats take it seriously” sort of way.

It didn’t work. Trump was elected and Franken is out. Sort of a win/win.

The ‘metoo’ movement was only suppose to take down Republicans... So the corrupt press wasn’t able to cover for him like they’ve done for so many democrats in the past - from Kennedy to Clinton to Edwards to Epstein...


Interestingly, the same thing seems to be happening regarding “racism” these days. And it turns out that the Democrats seem to be the racists these days.

I don’t find any humor in that photo at all, no reflection on the posting of it. It needs to be seen.

1. you don’t kid about taking liberties at a woman’s expense
2. she is a dedicated member of the military, and doesn’t deserve this disrespect
3. look at the age of this jackass, and he still hasn’t grown up
4. someone should have beat the crap out of him on the spot
5. this just shows how fit he was to be in any kind of leadership for our nation
6. he should not have run for office, and should not have been elected

2 weeks of harassment from this guy.

The only bigger loser then he are the voters of Minnesota who took him seriously and gave him two terms!

I think Al expected more of his actions to come to light. When he realized that the rest would remain hidden, he came to the conclusion that he could have gotten away with most of it if he hung tough.

But he didn't hang tough - he's a big pussy.

Maybe he will run again as Stuart Smalley . (He ought to be good enough).