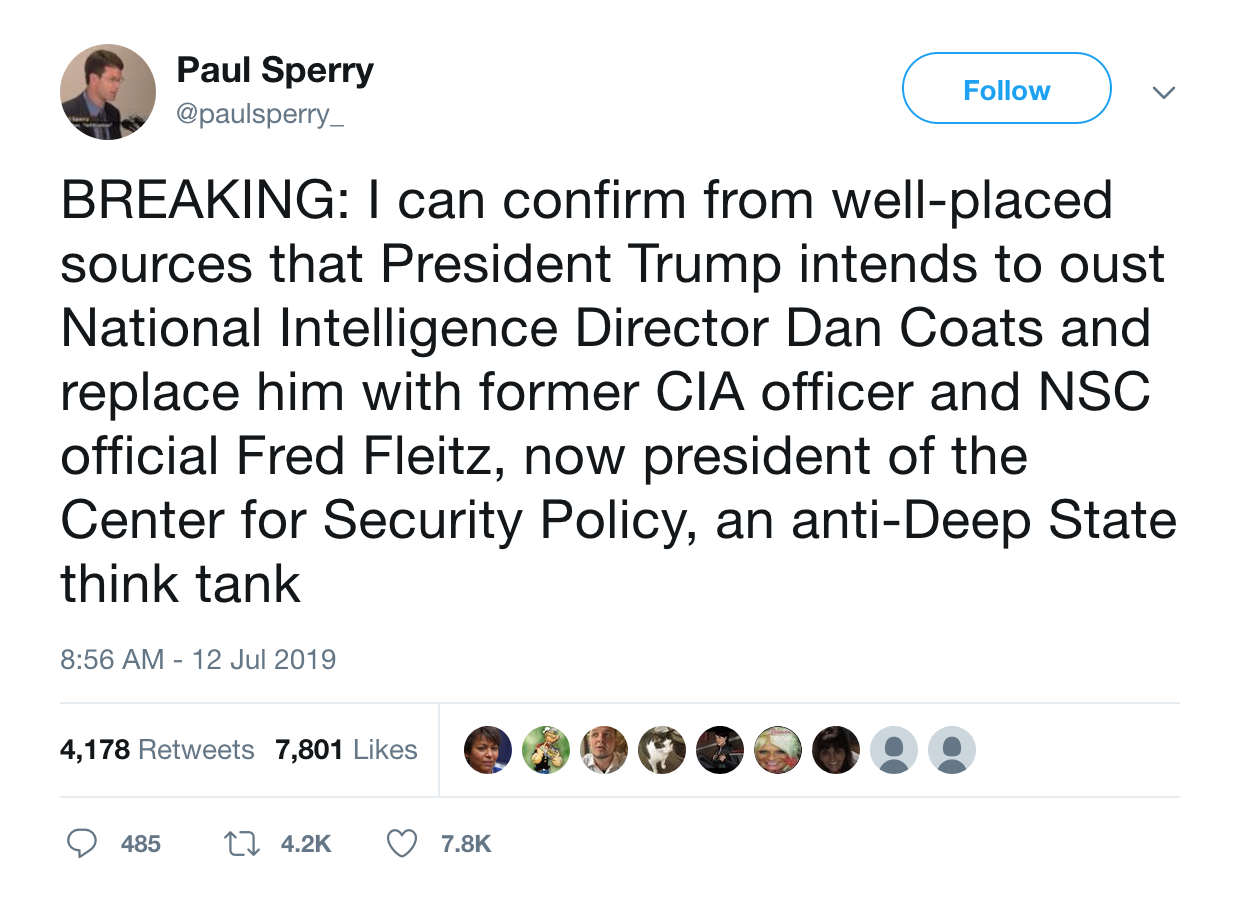 Trump needs to get on with draining the Swamp.

The CIA is BADLY in need of a severe shaking up!

I’m surprised Coates lasted this long, considering he put out a memo essentially promising to protect the Deep State against Barr.

I guess Trump gave a chance to do as told - and he didn’t.

Some speculate that this is to speed up declassification of Spygate documents.

The new candidate is tight with John Bolton.

I’ve seen Fred Fleitz and I’m very impressed with him. I don’t think I’m wrong when I say he will be loyal to the President and do what needs to be done and knows how to do it. He’s been around for awhile......

“I’m surprised Coates lasted this long, considering he put out a memo essentially promising to protect the Deep State against Barr.”

I figured that he might be hindering the Barr investigation. He was probably protecting the deep state.

This was the man who I thought should have been ditched two years ago.

I was beginning to think it would never happen.

I love our President.

And he is not above making up lies to make President Trump look bad.

I agree. Fleitz is a great choice.

The Office of the Director of National Intelligence, ODNI, was created post-9/11 at the recommendation of the 9/11 commission. The purpose is to serve as the central hub of intelligence information, gathered by multiple intelligence agencies, to insure equal distribution to all elements of the intelligence apparatus.

Due to the structure of the ODNI, the cabinet member filling that position has an important role in: (a) knowing what each intelligence agency is doing; and (b) sharing intelligence operations and outcomes, beyond the originating agency, to those national security offices who may have an operational need/interest in cross-agency information.

President Obama together with Donilon, Holder, Emmanuel and Jarret, solved this problem early on by placing an abject idiot named James Clapper into the position of ODNI.

Yes, James Clapper was purposefully put into the position due to his lack of competence. Clapper’s stupidity was a purposeful asset asset for the corrupt -politically motivated- officials that President Obama placed into the intelligence apparatus (ex. Brennan, Holder, Comey, Clinton, Panetta, Carter et al).

Oh, there are dozens more examples, but you get the point!

President Trump placed Senator Dan Coats into the ODNI position, and many critics of Dan Coats have surfaced as a result of various declassification requests that appear to have stalled in his office.  Some of the criticism is valid, some, notsomuch.

It could be true that Dan Coats is part of the aggregate deep state problem. However, there are both Pro and Con examples of ODNI Dan Coats on both sides of this argument.

(1) Dan Coats declassified and publicly released the April 2017 FISA Court opinion of Presiding Judge Rosemary Collyer. At the time there was no-one looking for that very serious criticism of how the Obama administration weaponized the FISA process and abused the FISA court. ODNI Dan Coats could have easily kept that 99-page report classified and hidden in the vaults of the deep state.

(2) You might remember the aftermath of President Trump traveling to Helsinki, Finland, for a meeting with Vladimir Putin. The media and former Obama intelligence officials were at the apex of their “Russia Collusion/Conspiracy” claims. The day after Brennan, Yates, Comey and Clapper went media crazy with the anti-Trump fuel, ODNI Coats arbitrarily declassified and released the FISA Application used against Carter Page. That release supported President Trump and immediately crushed the resistance narrative.

At the time of the FISA application release, SATURDAY July 21st, 2018, everyone was so caught up in the substance of the explosive information that no-one stopped to ask: hey, wait, where did this come from and why are we getting it? At the time no-one was looking for the FISA application and it would have been very easy to keep the highly classified document hidden. The declassification and release appeared without anyone really asking for it.

So, it’s possible that Dan Coats is keeping stuff hidden that would disparage the institutions; however, it is also true that Dan Coats has released stuff that does exactly the opposite.

All of that is said to remind everyone we should pause before jumping to conclusions about media reports of Coats demise that originate from Axios and then spread through the media bloodstream – Fox News example. There is always a possibility the anti-Trump media is just trying to stir stuff up.

DC is a very deep swamp.

President Trump’s rallies will now be for recreational purposes only.

Thanks for posting that. This is the first time I heard about it.

Say or think what you want but that rally is the reason for Mueller's postponed testimony to Congress.

Now the President should schedule another rally for the 24th.

I’ve seen Fred Fleitz and I’m very impressed with him. I don’t think I’m wrong when I say he will be loyal to the President and do what needs to be done and knows how to do it. He’s been around for awhile......

I’ll believe he’s the real deal when they rape hoax him.