If Huber had any integrity he would have been forthright about having other items on his plate and should have recommended that the FISA responsibilities be given to someone else who could actually take the time to do their job.

Huber had originally been asked to take a look at the FISA applications and the electronic surveillance but then he stood back and put that on hold while the Office of Inspector General was conducting its review, which would’ve been normal for the department.

OMG!!! He hasn't been doing anything all this time. I KNEW IT WAS ALL BS!!!

The other issues he’s been working on relate to Hillary Clinton. Those are winding down and hopefully we’ll be in a position to bring those to fruition.

I'm simply going to ignore the fact that he has been doing something after all.

How dare you point out what the troll edited out of Barr’s comments
so he could make his whining seem legit?

Anything is possible. Just doing nothing for extended periods of time sometimes makes the original assignment go away, as there was apparently an inclination to believe the Mueller Report would be much more damning that it ever turned out to be.

But such was not the case. Thus the belated start, and with different players.

I read Huber had a staff of 400 working on this, that is a lot of salary with nothing accomplished. They should make restitution of salary.

Fire them all if they don’t.

“he stood back and put that on hold while the Office of Inspector General was conducting its review, which would’ve been normal for the department.”

Isn’t Barr saying that Huber was obligated to wait until the IG report was finished, that he wasn’t expected to do anything per department policy?

How is it possible? Huber was appointed by Sessions. Those who still want to believe Sessions is essentially a good, but weak man, don’t get it. Sessions was the linchpin of the whole effort to maneuver Mueller in as SC. Sessions always was a Trojan horse. The only other possible explanation for why Sessions acted as he did is that he is dumber than a box of rocks and extraordinarily naive. I don’t buy the dumb and naive explanation.

50 posted on 05/31/2019 9:26:56 AM PDT by Avalon Memories (This Deplorable is not fooled by the Marxist-Stalinist totalitarians infesting the Dem Party.)
[ Post Reply | Private Reply | To 2 | View Replies]
To: over3Owithabrain

And your opinion shows your ignorance.

How is this even possible?
______________
Has anyone (among many Freepers posting on this issue) even considered that much of what is being made news—even by conservative sites—is to keep news alive and create issues rather than actually looking at what is happening?

This article points out that Huber was following (presumably DoJ) procedure, meaning that it is standard to hold off the kind of investigation he was tasked to do if the IG is investigating the same thing, and wait for the IG report to finish before proceeding. So the point is, either various reporters knew this and made it news anyway or they did not dig deep enough or their sources weren’t savvy enough.

Just because a number of Freepers want hanging, drawing and quartering does not mean that the procedure of justice is not happening.

If there are any Freepers who know the DoJ process and the exceptions they would do everyone a favor by outlining them.

Any reasonable (legal, constitutional) ways of draining the swamp have to follow established process and laws, unless there are acceptable ways of changing the process.

This is where the fact that Horowitz was Obama’s appointee to be IG in a department that Obama knew full well was politically weaponized to the Nth degree becomes salient.

Hard to avoid the conclusion: Horowitz is Obama’s man and part of the coup conspiracy.

Ouch. A very telling comment... No work = no criminal referrals.

Sounds like Horowitz is going to disappoint us again, like when wimped-out and said that the FBI lovers anti-Trump texts and conversations didn't influence their work with the FBI.

No really, there’s over 30,000 sealed indictments ready to go. Every one of those 30k indictments? All contain the names of Democrats on them. 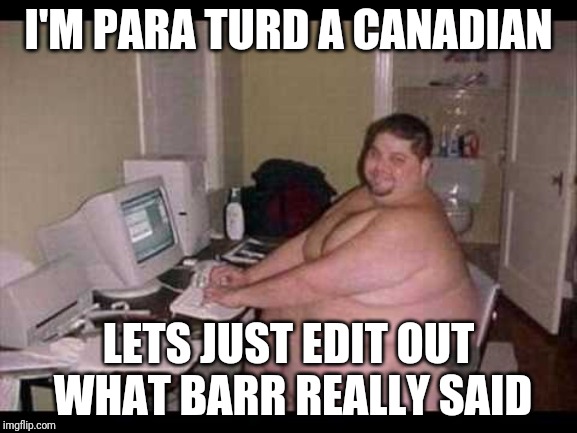 I feel stupid for trusting he was ever going to do the smallest thing about these people.

I just hope Barr isn't going the same route. These people need to be prosecuted and serve time.

Oops, there was no plan.