City First Lady Chirlane ­McCray will appear before the City Council Tuesday to ­explain what exactly her mental-health project, ThriveNYC, has achieved before giving her $250 million a year for the next four years.

New Yorkers can be forgiven for failing to notice positive results, what with the ever-growing ranks of homeless mentally ill in our streets and subways (and prisons). As these pages have repeatedly argued, ThriveNYC hasn’t been focused on helping the most seriously mentally ill.

Here, then, are 10 questions council members should ask the first lady to get to the root of that problem.

Two: In 2017, Gary Belkin, who at the time served as the city’s mental-health chief and now leads policy and strategy for ThriveNYC, admitted to a reporter that only $165 million of the ThriveNYC’s budgeted $850 million was allocated to people with serious mental illness, with the rest presumably directed to other issues. Doesn’t that get things exactly backward, given the centrality of serious mental illness to the current crisis?

Socialism is turning good works into a scam.

And she used to be a militant lesbian.

Who is now married to man and gave birth to kids in marriage.

Please do not post pics of this woman. It’ll make Fred Sanford roll over in his grave. 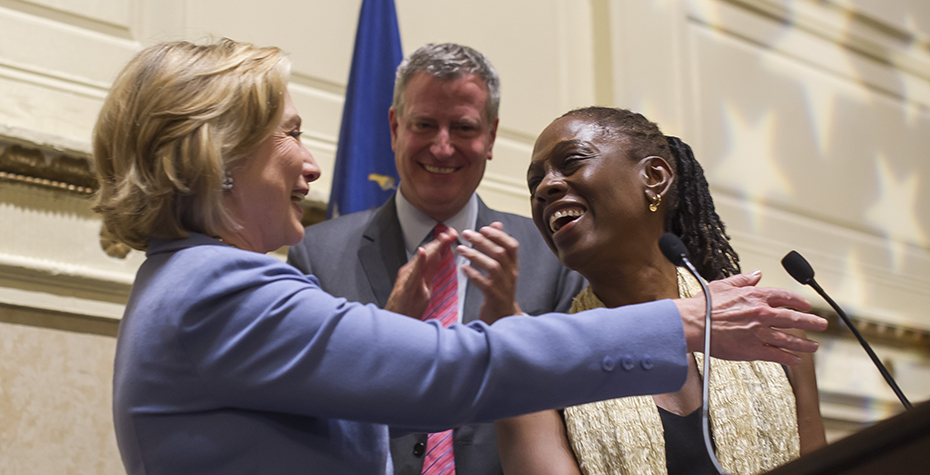 Wife Chirlane McCray, was give a $850 million budget for her ThriveNYC program But records show she has failed to keep track of where the money went. The small amount of data that was collected shows it fell far short of targets. Despite that, organizers have expanded the budget to $1billion over five years 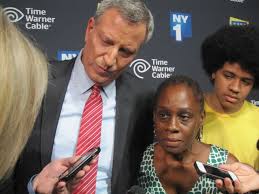 Insider buzz is that Blobbio is ruled by his wife---that the two work hand in hand to make public policy decisions. (Earlier news reports say Police Commissioner Bratton cautioned DeBlob not to bring his wife to the crucial meeting held to redress grievances of five cop unions Blobbio had slandered. Then.... boom...Bratton was ousted).

RESUME ENHANCEMENT PROGRESSIVE-STYLE During DeBlobbio's campaign, his wife Chirlane I. McCray was billed as a writer, poet, editor, communications professional, and political figure who published poetry and worked in politics for the Clintons.

THE REAL STORY Mrs DeBlobbio loudly declared her lesbianism in a magazine article---she was in a black feminist lesbian group and wrote poetry about being a lesbian. Politicker noted her husband's campaign website doesn't reference her background as an avowed lesbian and a lesbian activist or lesbian poet: It notes her affiliation with the Combahee River Collective, omitting mention of the group’s lesbian roots, referencing it as "a pioneering black feminist collective."

The two met while both worked for the Dinkins campaign. She says she had a nose ring and wore African garb when he spotted her and was completely smitten. She never told him she was a lesbian. And later said after their marriage she was still attracted to women.

During the mayoral campaign, she was asked about her lesbian lifestyle----she retorted she "didn't understand the question." The Blobbio's honeymooned in Communist Cuba and picked coffee beans w/ Sandinistas (then America's arch-enemies).

The New York Post ran a cartoon depicting the couple in bed, McCray on the phone telling someone, "I used to be a lesbian, but my husband, Bill de Blasio, won me over," while her husband lay beside her clad in sexy lingerie. OMG Liz and the beat goes on!!! These BASTARDS will investigate Trump businesses to the enth degree BUT nothing to see here just move on!!!

Thank you Liz, MUCH BETTER NOW!!!

SHE IS REQUESTING MORE MONEY TO LOSE! (STEAL)

$850 million was allocated to people with serious mental illness
ALLOCATED, how? given to each in a check(redistribution)are they still living on a subway grate in NYC?
.
with the rest presumably directed to other issues.
Explain
PRESUMABLY, not clear as to where it all went
OTHER ISSUES, high paying jobs for family and friends I bet
A scam running that no one will address