“The best thing we can do is Keep AOC talking. The more she talks the more insane and ridiculous she appears to rational people.”

AND the more the Dems in general expose their insanity and intellectual bankruptcy in general ... Almost all of those who’ve crawled into the Dem 2020 primary clown car have endorsed the “Green New Deal”, mostly because they’ve got no other platform to run on and the GND gives them a ready-made platform, even though it is obviously insane to any voter who is paying the least bit of attention ...

our master Presidential troll is already taking these fools to the cleaner on twitter regarding the GND, but I would just LOVE to see him run some very early 2020 campaign TV ads that would slam the shite out of the GND by listing what’s actually in it ... such ads this early would also be totally outside of the box, once again break all the “rules” and seize all initiative from the Dems and their lapdog media ... quite frankly, such ads would sew chaos, confusion, panic, and outrage ...

As a bartender she would steal other people’s tips. So it is natural for her to come after everybody else’s money.

This was her ‘hit back line’:

Ain’t that the truth. Pretty much says it all.

And then boldface lie about it on national media.

I can think of lots of comedy potential from the liberal side of our politics, but the “comedians” will never touch those subjects.

Another one of the democrats finest crazy member.

That’s what she’d like us to believe — a “bartender”. Someone — maybe Rush — said that what she has been an official Community Organizer (Obama), and did bartending on the side.

If you think about it, she actually is better than Obama, in that she went to work occasionally. Obama and his partner Michelle never had real jobs.

They will try to be sure, but I suspect they will need to undermine her since she’s shown no sign she’s willing to listen to her “elders”. I suspect someone on her staff was paid to sabotage her GND launch by putting that ridiculous FAQ document online, for example. If I’m right, look for more of the same.

It still might not work because her base doesn’t much care what Granny Nan has to say about anything and if the moron who appeared on Tucker last week is any example, her advisors have mastered the art of lying and denying without regard for the truth, because they know they can get away with it.

Exactly, it sounds like a project for a junior high social studies class. Which is about her level of maturity and knowledge....

“If you think the democrat pols are thrilled by her arrival, think again.”

So ironic, snice she is their creation, their love child, a product of puclic schooling, feminism, political correctness, the MSM, MTV, SJWs and virtue signaling.

She IS the New Democrat. 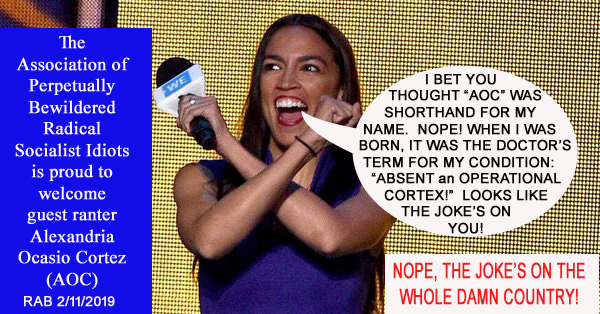 That is what each division was limited to in order to get their point across. Two minutes and a summary which was around 20 seconds. The admirals received summaries on paper as well and they could take notes on later on in the day if they had any questions requiring amplification. I think the average 2 minute briefing even lasted as little as 40 seconds and then a 10 to 20 seconds summary. Graphs and other visuals we’re always posted or shown on the PowerPoint during these presentations as visuals helped get the point across quickly.

That is all the admirals htime for because the amount of information was so great the top brass could only be briefed with those types of constraints otherwise the Admirals, or in this case the president, would be in the briefing room all day long and there are other things that need to be done besides being briefed all day long.

And what a AOC doesn’t understand is when you are at the tippy-top I mean the very tippy-top of an organization (or the nation for that matter), there are a lot of time constraints.

AOC doesn’t understand and perhaps it is because she is incapable of delivering a blabber free and succinct 2 minute brief to anybody.

Caught Stefanny Miller’s am radio show. She was commenting on Trump’s comments. Using fart sounds and fart jokes throughout the segment. Another adult child proggie mean girl with a mic.