After President Donald Trump announced his proposed immigration deal that would offer DACA protections to Democrats in exchange for wall funding, right-wing pundit Ann Coulter ripped the deal and said it would make a wall useless.

There are a million things to trade for a wall: A higher federal minimum wage, an infrastructure bill, a solar panel bill,” Coulter tweeted. “Trade a wall for AMNESTY, and there’s no purpose to having a wall.”

"We voted for Trump and got Jeb!” she wrote on Twitter.

I live in an area that is one of the hottest spots on the border right now and I do not agree with Ann Coulter. I cringe at a lot of what she says about the border issues. She really needs to educate herself if she wants to speak out. President Trump has been working hard to secure the border, and get support and funding to do it. He is facing an uphill battle not only with dims but with Rs along with judges that don’t support securing the border or controlling illegal immigration. What she says and does is not helpful. I understand she is promoting herself and she gets media attention for this sort of rant but she is not helpful toward securing the border or dealing with illegal immigration.

Sure it is. A rose by any other name is still a rose.

I still like the conspiracy theory that Andy Kaufman faked his death, and “Ann Coulter” is actually Andy in drag, playing his longest and greatest comic creation to the hilt, for as long as he can. :P

This was all about optics. The President understands that much better than Pelosi et al.

I really believe that “they” are stunned to be dealing with a Republican that doesn’t promptly capitulate. Especially one that is so deftly trolling them, despite the 100% backing they have by the so called media.

Instead of whining the weak sisters in the GOP should be taking notes. But they are too cowardly even for that.

265 posted on 01/19/2019 7:38:15 PM PST by ChildOfThe60s (If you can remember the 60's....You weren't really there)
[ Post Reply | Private Reply | To 112 | View Replies]
To: Nero Germanicus
I find Anne Coulter very tiresome. She is playing both ends against the middle. Carps about Trump and the commie democrats alike. No better than the No Trumpers who are always promoting themselves instead of helping Pres Trump drain the sewer in DC. Pres Trump has himself and a number of co workers who help with planning what needs to be done and how those plans can and will be implemented. Strategy includes thinking long term, which is obviously not anything Coulter is capable of as regards something beyond selling her next book. Her backbenching produces nothing original or new. She has become as predictable as the media fake news readers. A know it all gadfly that has become as irritating as George Will.
266 posted on 01/19/2019 7:40:15 PM PST by mountainfolk
[ Post Reply | Private Reply | To 1 | View Replies]
To: firebrand; af_vet_1981

We actually don’t know if she is or is not “playing a part” in alliance with the Trump White House. ;-)

#Pelosi tweeted this [her refusal] 1min before the planned speech. Then Trump delayed the speech and oddly it had every point in her criticism
#TrumpSpeech
https://twitter.com/Mag4Torsades/status/1086779329307123714

Looks like that clever rascal Trump hoist her by her own petard. 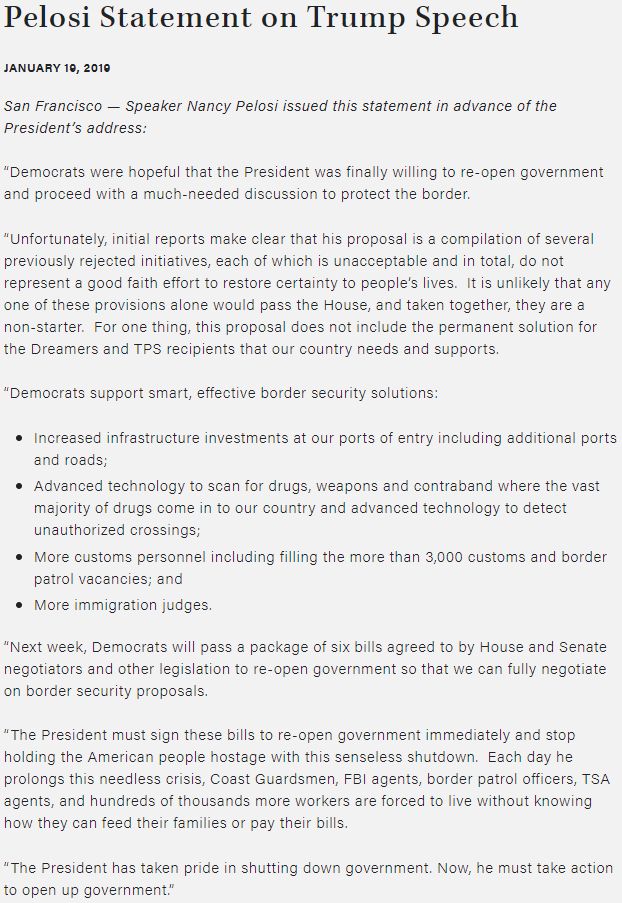 Well, did he really make a concession?

Seems to me like he knew she couldn’t go for it, so now whatever happens to the DACA folks, she owns it.

No. Think you covered it quite well.

Or I was going to suggest he misspelled tool, and the first “l” was supposed to be an “o”

“We just have been held hostage by a bunch of third world invaders and the democratic party.

What are you complaining about fickle Ann? In 2012, your dream team was Christy and Romney. Trump made this proposal precisely because he knew it would be rejected. Shut up Ann, and let the adults handle this.

You are so right. Until they get more barriers and more officers they are just bailing with a sieve.

Get the wall up, stop/reduce the flow, then concentrate on removal.

Trump’s proposal is reasonable and makes Pelosi look like the dumb evil witch that she is.

Remember I always have a
Super Secret, Super Genius Plan.

Oh, ignore Ann. This is her most recent incarnation.

Yup. That was exactly the President’s plan. In case anyone didn’t catch it the other day when he tweeted about how his announcement would be his THIRD attempt at resolving the shutdown with dems.

The President outmaneuvered the imbeciles again. It’s hilarious. They really think they can outfox this guy. Remind me, what did Trump do for a living before he became President?

So now, President Trump has these idiots on record, rejecting DACA. Priceless.

Ann (”I mean it this time!”) Coulter hops over the fence so many times, you can use her to help fall asleep.

I think Annie finally blew her brains out - too bad she did it while on her knees in front of George Will....she’s all over the place these days.

Not too much at all! Indeed, you said it very well, sir! I couldn’t have said it better.

I was thinking maybe I should replace the ricin with RPGs, ricin is too hard to control.

If I did that, I'd have to double the number of 50 cals, no one gets thru.

This would reduce the number of new judges needed for asylum status review to zero.

Been watching some FReepers fighting over ann coulter's opinion, while ann is busy giving bill maher another lewinski. Who cares what she says?