Mr. Pollack believes that “political correctness killed Meadow.” A prominent villain in his narrative is Robert Runcie, who came to Broward from Chicago in 2011 as the superintendent of the county’s public schools. Mr. Runcie introduced a program called Promise—a feel-good acronym for Preventing Recidivism through Opportunities, Mentoring, Interventions, Support and Education—under which students who commit crimes in public schools would no longer be reported to the police by administrators. Under Promise, students would be evaluated and dealt with exclusively within the schools and their associated reform programs. Even felonies as severe as drug dealing, sexual assault and bringing weapons to school could lawfully be kept from the police.

Mr. Runcie “saw that minority students were being referred to the police at higher rates than whites,” as Mr. Pollack tells it. “Rather than recognize that misbehavior can be the result of many complex problems outside school, or at home,” the superintendent concluded the disparity was because “teachers and schools were racist.” With no reporting, “now there’s no crime. The school’s data looks great. Problem solved.”

But a much worse problem was created: “No student has a criminal background as a result, so once you graduate from school and want to buy a gun, background checks are useless.”

Mr. Runcie and his supporters called their policy “discipline reform.” Violent students had to attend “healing circles,” among other sorts of in-house, nonjudicial remedies. The result, says Mr. Pollack—so agitated that he almost shouts—is that “mentally disturbed students, violent psychopaths like 18-1958, are right there in the classroom with normal students like my daughter, and with teachers who don’t know how to deal with them, since they can’t bring in the cops.”

Andrew Pollack’s daughter was killed at Parkland. He has co-authored a book “Why Meadow Died: The People and Policies That Created the Parkland Shooter and Endangered America’s Students” due out next month.

Yes but it is mighty hard to prosecute it.

We all know what caused the Parkland shooting.

Hopefully Mr. Runcie will soon follow in the footsteps of Israel as he is a bigger part of the failure.
If his program wasnt implemented the cops would have never had to go to Parkland High
Israels cops were at the perps house on too many occasions and the wacko should have been locked up for psych reasons.
Runcies’ program negated all those reasons

Supt Runcie alerted School Board members of the departure of human resources' Nichols, head since 2015, who ignorantly
overruled the firing of a school security guard found sexually harassing students, including Meadow, one of the murdered students.

Runcie is a stupid excuse for a $400,000 Supt..... doesnt understand IT IS HIS JOB to know these things and TO DO SOMETHING ABOUT IT.

Andy Pollack will bring down many many Democrats not only in Broward County but in other Democrat infected cities where the school crime rates have”magically” fallen since Obama’s fake P R O M I S E program of lying to steal federal money OUR money started.

7 posted on 01/12/2019 9:47:40 AM PST by jmaroneps37 (Conservatism is truth. Liberal is lies.)
[ Post Reply | Private Reply | To 1 | View Replies]
To: All
Assuming Officer Scot Peterson has nominal intelligence----knows he's a P/O with clear duties-----the question is "why didnt he go in?" The answer is easy.......if Peterson went in and apprehended a minority (Cruz the shooter)......this would have stopped the federal tax dollars (read bribes) Obama was pouring into Broward. Big Money ...as long as they kept minorities off the arrest roles. Deputy Peterson was apparently ordered to "wait outside."

Adhering to The Obama Plan was clearly the order of the day for these imbeciles.

Broward Police Captain Jan Jordan told sheriff's deputies to 'stage' and form a perimeter outside the shooting...... as students and teachers were being massacred inside. Jordan also denied deployment of two Rescue Task Force teams that had arrived. Three paramedics and 3-4 officers had rushed to the scene to help---but Jordan denied them entry.....

A lesbian, Jan Jordan, 49, was in charge of deputies who responded to the first calls of the shooting.
Broward Sheriff Scott Israel himself placed Captain Jan Jordan in charge of the school massacre scene.

Jordan has since left her Captain's job, but she, like Peterson, Runcie and Sheriff Israel are still cashing Broward paychecks.

<><> What part did D/W/S play in securing the $58 million bribes, er, I mean tax dollars
Obama showered on Broward for keeping minorities off the arrest roles?

"Your cut of the Broward money is in a numbered account in an offshore French
Polynesian bank, my President."

9 posted on 01/12/2019 9:51:09 AM PST by Liz (Our side has 8 trillion bullets; the other side doesn't know which bathroom to use.)
[ Post Reply | Private Reply | To 3 | View Replies]
To: All
Also "in charge" that infamous day was Obama's hand picked pal from Chicago----Broward County School Supt, Robert Runcie. Incidentally, Runcie is reportedly sitting on a $900 million dollar school bond issue that he refuses to spend.

Under his new contract, Runcie would:
--Be able to trade in 15 of his 29 vacation days for a cash value of $20,500.
-- Get $48,000 contributed annually from the school board for retirement plans
-- Be allowed to earn a pension based on four years of his service in Chicago,
estimated to cost taxpayers $80,000.

A the salary hearing, more than 30 Broward people lined up to praise Runcie’s work since he started in 2011. Leaders of local community organizations, businesses and schools praised improved student achievement, Runcie’s communication skills and inclusion and protection of immigrants and minorities under Obama's vaunted "Promise" plan. Then the massacre took place.

Earlier, Runcie was named Supt of The Year. 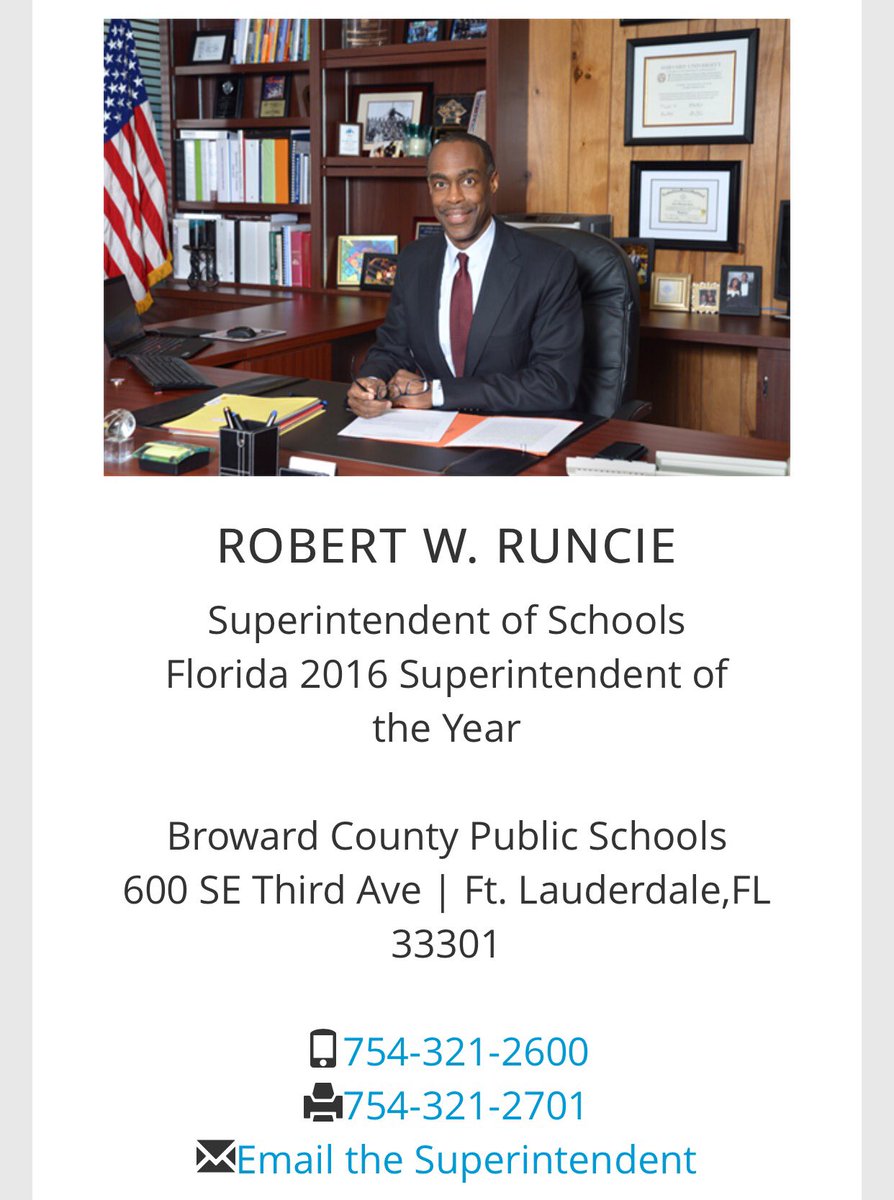 Andrew is one of the few men in Broward county. Lots pf stones

Been doing a running account on “Promise” and the Parkland school in http://www.theusmat.com/index.htm

13 posted on 01/12/2019 11:58:57 AM PST by mosesdapoet (mosesdapoet aka L,J,Keslin posting here for the record)
[ Post Reply | Private Reply | To 1 | View Replies]
To: jmaroneps37
Father of massacred student, Meadow, Andy Pollack, will bring down many many Democrats, not only in Broward County,
but in other Democrat-infected cities where school crime rates ”magically” fell as Obama’s criminal PROMISE program was adopted----
the Promise MO consisted of (a) bribing cops to lay-off, (b) lying, (c) and falsifying official documents to (d) steal federal tax dollars.

Broward jumped in feet-first...seeing a dollar sign on every crime....big or small. It was all gleefully pocketed.
N-o-t-h-i-n-g was allowed to stand in the way of the federal tax dollars pouring into Broward.

Broward L/E was called to Cruz's home 47 times.....but the bribed cops pretended nothing was amiss.
All that was required was to have Cruz attend a sap-happy "healing circle" mandated by PROMISE.

Yet the first cry was gun control from all the idiots and made it about gun control to hide the insidious despicable sheriff, his people, the superintendent and the school administration. Yet they all still have jobs and pensions and nothing happened them after the killing of sons and daughters

Broward Senior Brandon Huff rushed to the building where the shooting was taking place....... “The school resource officer was behind a stairwell wall, just standing there, and he had his gun drawn, and he was just pointing it at the building,” Huff said. “Shots started going off inside, and you could hear them going off over and over again.” […]

“Mr. Pollack believes that “political correctness killed Meadow.” A prominent villain in his narrative is Robert Runcie, who came to Broward from Chicago in 2011 as the superintendent of the county’s public schools.

An incredibly dangerous situation. With liberal fascists allowing criminal students to murder other students, you will create a vigilance situation.

I predict that some parent whose child is murdered will shoot and kill the administrator or principal who allowed it.

This will be followed by a jury nullification, absolving the parent.

We are heading for rule via the barrel of a gun: If you can shoot better and faster than your opponent, you rule.