People are having fun lampooning Alexandria Ocasio-Cortez's selective exploitation of Scripture to support the Democrats' advocacy of open borders, but let's not allow this mirth to distract us from larger questions.

The incoming congresswoman tweeted: "Joy to the World! Merry Christmas everyone -- here's to a holiday filled with happiness, family, and love for all people. (Including refugee babies in mangers + their parents.)"

Let's put aside that Ocasio-Cortez is conflating the Nativity story described in Luke's Gospel, in which Mary and Joseph went to Bethlehem to register for the Roman census, with Matthew's description of the couple's fleeing to Egypt to protect Jesus from King Herod's decree to murder every boy age 2 or younger in Bethlehem. The latter example also fails because there was no illegal border crossing into Egypt, as it, too, was part of the Roman Empire and, in any event, because Mary and Joseph were following God's command for them to flee to protect Jesus; a divine order trumps all man-made laws. Let's also defer until a later time the bizarre scolding about refugee babies from one whose party virtually supports abortion on demand.

Ocasio-Cortez's biblical illiteracy is irrelevant. The point is that she is carrying on an unfortunate practice of cherry-picking Scripture for political gain. She's simply trying to show that conservatives have no compassion for "foreigners" or the lost and that they are egregious hypocrites and frauds for holding themselves out as Christians while declining to model Jesus' love.

In a less imperfect world, I wouldn't have to bother refuting this, but Democrats have done a masterful job permeating our culture with these slanders, and far too many people actually believe them -- just as they believe their equally wicked mantra that we are hateful racists, sexists and homophobes.

It's wicked because they know it's not true. But the Democratic Party's main recruiting strategy is to show that Democrats care about people and that Republicans don't. In a world where supposedly good intentions are the yardstick, results don't matter.

Though I am convinced that the average conservative has as much compassion or more than the average liberal, I realize I'm not going to convince anyone of that just by asserting it.

What might be more helpful would be to examine how compassionate and prudent the Democrats' policies on immigration and related issues are in practice.

Underlying Ocasio-Cortez's tweet on refugees is her implied charge that Republicans don't care about refugees, foreigners or other vulnerable people -- that we would deny asylum to those truly fleeing their countries to escape harm and we sadistically desire to separate children from their parents.

These are all malicious lies. Republicans don't want to repeal asylum laws, but they do want the laws to be applied in an orderly fashion to ensure that we help those truly in need. When Democrats support open borders, sanctuary cities, across-the-board amnesty and a catch-and-release policy, they are incentivizing border anarchy, human trafficking and lawlessness. They are endangering American citizens and discriminating against immigrants who played by the rules.

The question we ought to insist on discussing is whether Democrats even believe in the concept of nation-states anymore -- and specifically American sovereignty -- as opposed to deferring to some enlightened global entity. Do they even remotely embrace the American idea anymore? Socialism and top-down authoritarianism were hardly contemplated by the Framers. I might tell Ocasio-Cortez that the Apostle Paul said, "From one man (God) made all the nations, that they should inhabit the whole earth; and he marked out their appointed times in history and the boundaries of their lands."

It is axiomatic that a nation cannot exist without borders and border enforcement. This is especially true of America because its uniqueness is in its founding ideas, which are enshrined in the Declaration of Independence and Constitution.

Our patriotic ancestors knew that our freedom tradition depends on adherence to the Constitution and on a citizenry dedicated to ordered liberty -- understanding that freedom is meaningless and ephemeral unless undergirded by the rule of law. They believed that the government's first duty is to protect its citizens from domestic and foreign threats. They disagreed on whether and to what extent we should export our democratic principles but never on whether we should preserve them for ourselves.

Conservatives fervently believe in ethnic diversity. America is undeniably -- and gloriously -- an amalgam of countless ethnicities. But we also believe in the assimilation of all ethnicities into a common culture committed to the Constitution and rule of law -- as opposed to a Balkanized society of competing groups that are suspicious and hostile toward one another.

This is why the legal path to citizenship and its attendant naturalization process have involved the applicants' pledge of loyalty to this great nation of which they want to become a part.

Democrats need to explain whether they still believe in the American system itself and in America's sovereignty -- in its right and duty to enforce its immigration laws, as well as the orderly, controlled system of immigration those laws establish. Let them explain how eviscerating these laws would be in the best interest of America and its citizens in any respect, how flooding our borders with people we can't support or assimilate would help either those immigrants or existing American citizens.

If we care about preserving America as the freest, most prosperous and most benevolent nation in the world, then we cannot continue to ignore border security and thwart the rule of law. How compassionate would the world be without America?

In recent Testimony of District Attorney John M. Morganelli before the House Subcommittee on immigration, Border, Security and Claims he stated:

•There are currently over 400,000 unaccounted for illegal alien criminals with outstanding deportation orders. At least one fourth of these are hard core criminals.

•80,000 to 100,000 illegal aliens who have been convicted of serious crimes are walking the streets. Based on studies they will commit an average of 13 serious crimes per perpetrator.

•Illegal aliens are involved in criminal activities at a rate that is 2-5 times their representative proportion of the population.

•In 1980, our Federal and state facilities held fewer than 9,000 criminal aliens but at the end of 2003, approximately 267,000 illegal aliens were incarcerated in U.S. correctional facilities at a cost of about $6.8 billion per year.

•At least 4.5 million pounds of cocaine with a street value of at least $72 billion is smuggled across the southern border every year. ..

•56% of illegal aliens charged with a reentry offense had previously been convicted on at least 5 prior occasions.

•Illegal aliens charged with unlawful reentry had the most extensive criminal histories. 90% had been previously arrested. Of those with a prior arrest, 50% had been arrested for violent or drug-related felonies.

•Illegal aliens commit at least 2,158 murders each year – a number that represents three times greater participation than their proportion of the population.

•There may be as many as 240,000 illegal alien sex offenders circulating throughout America. Based on studies, they will commit an average of 8 sex crimes per perpetrator before being caught.

•Nearly 63% of illegal alien sex offenders had been deported on another offense prior to committing the sex crime.

•Only 2% of the illegal alien sex offenders in one study had no history of criminal behavior, beyond crossing the border illegally.

•In Operation Predator, ICE arrested and deported 6,085 illegal alien pedophiles. Some studies suggest each pedophile molests average of 148 children. If so, that could be as many as 900,580 victims.

•Nobody knows how big the Sex Slave problem is but it is enormous.

•The overall financial impact of illegal alien crimes is estimated at between $14.4 and $81 billion or more per year. Factor in the crime as a result of the cocaine and other drugs being smuggled in and the number may reach $150 billion per year.

Where does Rubio come off berating Trump for citing FACTS?

The 23 percent criminal traffic offenders figure is only part of the overall picture. According to the Center for Immigration Studies, another 23 percent, more than 43,000 illegal aliens, were convicted of drug offenses. The violent crime category of assault, robbery, sexual assault, and family offenses comes to 12 percent. The non-violent crime grouping of larceny, fraud, and burglary totaled seven percent, and on the list goes — equaling 100 percent of illegal aliens who have been through the criminal justice system and inflicted thousands to millions in cost per alien on the system, for issues having nothing to do with their illegal entry into the country]]

The end-game, the real end-game for Democrats is a return to a feudal system, with Dems being the 1% ruling elites and the rest of the population as serfs without any power and certainly without any weapons.

Compassion isn’t the issue. David Limbaugh should know better than to accept that premise.

and I am sick of libtards' mawkish excess compassion coupled with their sanctimonious, holier-than-thou, superior moral attitude.

Jesus was a carpenter, skilled in building things like...walls.

How compassionate is it for Americans that pay the bills for the immigrants’ welfare and are victims of crimes by them?

Surrender By Subterfuge is closer to the mark.

I heard she sent a Happy New years card to Widow Anamika Singh and her 5 month old baby.

Are there any Democratic politicians at the national level who support open borders?

Pres. Trump needs to enforce the "only citizens can vote" aspect Section 2 of the 14th Amendment (14A) for the 2020 elections. Sec. 2 is a penalty for states that effectively nullify voting power to swing the outcome of an election which is what Democrats are alleged to have done in the 2018 midterm elections.

In fact, the following excerpts from the left column of the referenced page in the congressional record are from the writings of statesmen and judges that connect Sec. 2 of 14A with the "uniform Rule of Naturalization" Clause (1.8.4) and citizenship as a requirement for voting.

Pres. Trump needs to work with the states to require that citizens present valid citizenship / photo ID cards before being allowed to vote. The ID cards need to be scannable to facilitate "vision impaired" Democratic ballot box officials. 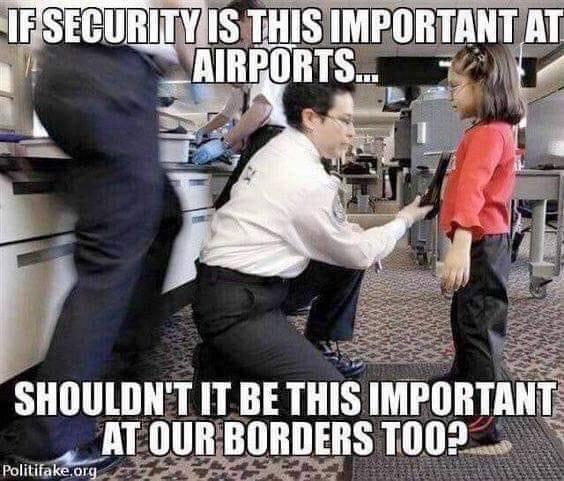 15 posted on 12/29/2018 2:32:46 AM PST by 4Liberty ("The Democrats are the Party of Crime." - Donald J. Trump)
[ Post Reply | Private Reply | To 14 | View Replies]
To: 4Liberty
See my reply #11, above. Open border policies are better described as "treason" than "compassionate." Generally--the world over--they are being advanced by loons & crackpots, who deliberately seek to deprive all peoples of their natural pride in heritage; their natural rights to build on those unique heritages.

Without overwhelming evidence to the contrary the answer has to be NO! The 🐀s are only interested in ruling people their way, and if you don't like it - as Eric Swallwell would say - we will kill you!

Compassion and Empathy have nothing to do with Government.

Government exists to defend its Citizens from threats, Foreign and Domestic and provide for the common good.

Picking Winners and Losers is not the Job of the Government, but that hasn’t stopped the erosion of our Individual Freedoms by Government fiat.