There seems to be confusion amongst some Republicans about how critical this moment is to the future of the Republican Party in terms of what we believe. The Left is trying to destroy a wonderful man by throwing the proverbial kitchen sink at him at the end of the process with their no-holds-barred attitude of win at any cost. If Kavanaugh does not win the vote, then just who can be nominated? The Democrats will have successfully taken over control of the Supreme Court.

First, if you think the Republicans have a chance to win in the upcoming election if he is not voted onto the court, you are delusional. The base will totally desert the elected officials who did not stand up to a bunch of Left-wing extremists. That will certainly cost the Republicans the House and probably the Senate. Republicans understand what a hit job this is, and they will be beyond rattled by the stupidity of any sitting senator that does not see through this charade.

Second, we all believe that women need to be protected from physical assault. After all, we are the party of law and order. We watched over the last two years while Left-wing heroes who bowed to the god of unfettered abortion and were treated in saintlike manner by their followers turn out to be the scum of the earth in their treatment of women. Now to try and turn this movement into a cudgel of false attacks on a good and humble man only serves to destroy that man and will harm the movement itself. They want to win this battle and then move on to the next one, hoping their victory will strengthen their cause.

Third, their cause is not to protect women harmed at a party three decades ago. Their cause is control of the Supreme Court. My wife had a recent discussion with someone who is a fervent Trump-hater and thus a fervent Kavanaugh-hater. A discussion akin to one you may have personally had. There was no agreement, of course, but my wife told me of a factual error that had been perpetuated by her verbal opponent. The statement made was that the Kavanaugh hearings are being “rushed.” They are not. Ruth Bader Ginsburg took 50 days. Stephen Breyer took 73 days. Sonia Sotomayor took 66 days. Kavanaugh is longer than all those and more. I suggested to The Wife just straighten out this one non-debatable fact.

When The Wife did such -- you guessed it – the response was not “Oh, thank you for letting me know; I did not know that.” The response was the truth. The reply was “That’s irrelevant. This man is dangerous to America having him on the Supreme Court. He will overturn Roe v. Wade, destroy medical care.” Etc. etc. etc. Otherwise, this scenario validates what you already know. The case against Kavanaugh has nothing to do with these sordid charges and everything to do with keeping any conservative Republican off the Supreme Court.

Fourth, and the most insidious part of this, is the Democrat U.S. senators and others who are throwing out the presumption of innocence with feeble accusations. People like Gillibrand, Blumenthal and Coons are willing to undermine a basic human value in our laws. Everyone is presumed to be innocent in our society whether in a court of law or their daily lives. Your child does not have to prove he did not steal a cookie; you have to prove he stole it. The fact that this is not a court does not rob Kavanaugh of his innocence. Taking this position is loathsome. And if the tables are turned, and they will be someday, you can bet your life these creatures will be arguing for the presumption of innocence. But once destroyed it cannot be retrieved.

Fifth, who do you think would be a good choice that would be acceptable by The Democrats? Hysterical Hirono has already suggested we hold the seat open until the 2020 election. The name that is being bantered about is Amy Coney Barrett. In anticipation of her possible nomination, The Left has already started websites to attack her. At her hearings to be a federal circuit court judge, the ranking member of the Judicial Committee, you know the one who started all this ruckus, Dianne Feinstein, did one of the most despicable acts in the history of the U.S. Senate. She questioned Barrett as to her commitment to the laws of the United States because of her commitment to Catholicism. This came from a member of the same party as President John F. Kennedy who faced similar charges almost 60 years ago before becoming the first Catholic U.S. President. Was Feinstein censured for her disgusting behavior? No. She is looked at as a heroine now. How long do you think it will take Kammy Harris or Spartacus Booker to call Barrett a self-hating woman?

This will always befuddle individuals like Governor John Kasich (OH) who don’t understand the politics of these matters. He doesn’t understand that this is a blood sport to our political opponents. He doesn’t understand that not voting in Kavanaugh will turn over his governorship to a Democrat and assure the reelection of Sherrod Brown to the Senate from Ohio. Bafflingly, he does not understand that delaying the vote will do nothing to validate Kavanaugh’s innocence in their minds – there is nothing that could. Kasich calling for a delay in the vote verifies why he was not the nominee of the Republican Party for president and thankfully he will never again hold public office.

As we watched Democrat after Democrat mimic each other in demanding Kavanaugh endorse a new FBI investigation, they wished we would disremember they virtually unanimously raced to a microphone and camera to denounce the very idea of Supreme Court Justice Kavanaugh instantaneously upon his formal appointment.

Does anyone believe if we suffered through two more weeks of this exhausting, self-destruction that one Democrat foisting this FBI idea upon us would alter their vote? Their obvious collective charade should be punished by voters in our upcoming election simply because of the enormous insult to our national intelligence.

Make no mistake, we either have to take a stand and approve this man to the U.S. Supreme Court or accept we are a gutless party. As Benjamin Franklin said, “We must, indeed, hang together or, most assuredly, we will all hang separately.” Yes, the Republican Party will die.

God owns this, and I’m here for God.

And, thank you, Bialosky, for so clearly asserting what those of us who have watched and warned about the rapidly-escalating push for descent into Old World ideas imposed by Liberals/Progressives--a push many never would have thought possible only a few years ago!

It was about 29 minutes after this nomination was announced, that Chuck Schumer said he would oppose with everything he’s got, or words to that effect. Hardly any Democrats would ever consider voting to confirm Kavanaugh in the first place.

The previous controversy about not getting enough documents from the White House was bogus, because all these Democrats were already opposed. There was no quantity of documents which would satisfy them in their evaulation of his nomination.

And it’s true now, that whatever the FBI comes up with now, these same Democrats still would never vote to confirm him.

All this is being done to placate Flake, Collins, Murkowski, and maybe get the support of Joe Manchin to get him confirmed by a razor thin majority.

Democrats CANNOT be allowed to set the precedent where they can destroy a persons life without facts, evidence, confirmation, based solely on allegation.

“Everyone is presumed to be innocent in our society whether in a court of law or their daily lives.”

I guess Mr. Bialosky has never been involved in a corporate HR “investigation”. 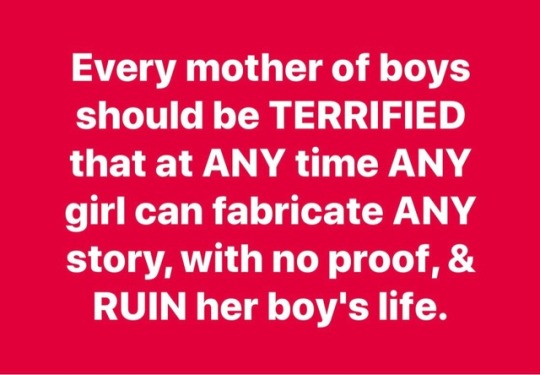 You are knowingly letting your wife associate with rabid libtards? What other many of risk do you take? /s

9 posted on 09/30/2018 11:35:51 AM PDT by wastoute (Government cannot redistribute wealth. Government can only redistribute poverty.)
[ Post Reply | Private Reply | To 1 | View Replies]
To: Kaslin
One more word: Progressives of both Parties are showing their allegiance to an ideology which has been attempting to replace those ideas of Creator-endowed rights, liberty and individual freedom embedded in America's Declaration of Independence and protected by its 1787 Constitution to limit power in government.

The ideas of America's founding period and its first many decades of existence were essential to individual liberty, as well as the explosion of opportunity, creativity, productivity and plenty--all of which were shared with oppressed peoples all over the world.

The ideas of the Liberal/Progressive movement since the late 1800's have brought America backward to the Old World ideas from which the Founders had escaped. The ideas of liberty need to be rediscovered and embraced for the protection of posterity.

Please visit this site to read the "Centennial Thanksgiving Sermon" of Ohio State Legislator and A.M.E. Bishop Benjamin W. Arnett, delivered in 1876. This is the word for today which would lift the hearts of all Americans, informing them of the ideas underlying their liberty and warning of threats to that liberty from a movement already begun in that 1876 year by those he described as "Liberals," led by leading academics of the day.

The dimmacrat party has descended to the level of ISIS, the taliban, and ms-13 all in one. They are no longer NAZIs, they are American Taliban- pursuing nothing short of the destruction of our statues, our history, our culture, and civilization itself.

Here here! This is a crucial moment. Republicans better make a stand or they can say goodbye to their majorities. President Trump will emerge unscathed. And if Kavanaugh does go down, the president should nominate the most right-wing stanch Constitutionalist he can find. And ram that down the Senate’s throat.

I think he is right but I want to clarify that they are not punishing the GOP or trying to teach someone any lesson.

The country passed the point of no return long ago. Judge K is a good man who deserves the support of God -fearing people. In each electoral district you can expect those God-fearing people to support the good and ignore those who compromise with evil even if the seat goes to a worse evil.

If God wishes to have mercy on America, I pray so, why do we think He needs the Republicans to do it?

They won’t like anyone. Why would the Republicans, who hold the White House, try to get the Dems to ‘like them’ and ‘find a suitable candidate’??? No way. Kavanaugh or torches and pitchforks!!

And I’m voting for De Leon here in California. He is leftie-lib but he won’t have any committee ranking, unlike DiFi-the Liar.

Get Brett Kavanaugh confirmed NOW!!!! He deserves it, and it will indeed be necessary for winning the midterms!

Amy Coney Barrett should be nominated to replace Ruth Bader Ginsburg—AFTER the Republicans win the midterms!!!! How lovely that replacement will be!!!! The Dims and their overlords (e.g., Soros) will be furious, of course!

Brett Kavanaugh and Donald Trump are far more popular with Republicans than any GOP senator, although Lindsey Graham is on the way to redeeming himself after his vigorous defense of Kavanaugh and denunciation of the leftist Democrats on Thursday last.

If the Republicans, no matter their excuse, do not confirm Kavanaugh next week, they can definitely say goodbye to victory in the November election.

Most conservatives just barely tolerate the congressional Republicans. That toleration will abruptly cease with a ‘no’ vote on Kavanaugh next week.

The congressional RINOs have to choose between a pat on the head from the leftmedia or their re-election.