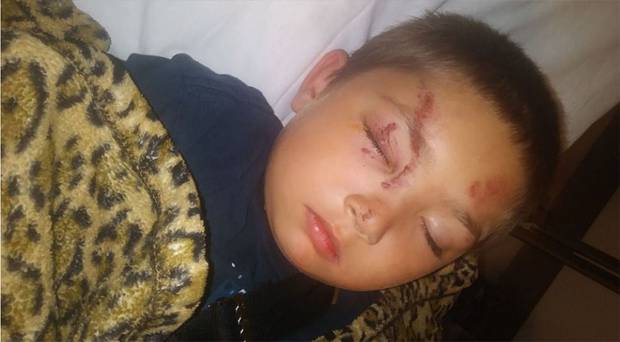 A 6-year-old boy in Olympia was assaulted after he says he stood up to a group of kids who were bullying his friend.

Carter and his mother Dana English left Harborview Medical Center in Seattle on Friday afternoon after a morning surgery to repair a laceration in his eye.

Carter says he was attacked by a group of kids around his age at his Olympia apartment complex Wednesday afternoon. He says he confronted the group for bullying his friend.

“They were just bullying him, like beating him up,” Carter said. “I just told them to stop... and then they did it to me.”

They beat Carter with rocks and sticks, and rubbed sawdust in his eyes. He ended up with a broken arm, lacerated eye and several cuts and bruises across his head and face.

Olympia Police are now investigating. They identified a 5-year-old who they believe started all this, and they’re planning to get social services involved. They say the case was briefly presented to the prosecutor’s office, but due to the age of everyone involved, the case will not result in a criminal referral.

Carter may need surgery on his arm, and definitely needs some rest, as he deals with the consequence of standing up for what’s right.

“I really don’t know what I’m hoping for other than for people to know that this is not acceptable,” Dana said. “Bullying is not okay. There’s no reason to bully someone ever."

Friends have set up a GoFundMe account to help the family with medical expenses.

“due to the age of everyone involved, the case will not result in a criminal referral.”

Just put the bully ringleader down.

There are things you can do no matter the age.

Force those kids into psychological profile sessions, and get them the help they need.

Take custody of them away from their parents for a period of time.

Make it plain, this carp is not acceptable.

Now the kids giggle and realize next time nothing will happen either.

This brave kid was old enough to stand up against bullying his friend. To me, that means the bullies are old enough to be sent to juvvy and then prison.

Brave and moral young boy. He has learned not to confront a group of bullies if you are alone.

That's not going to happen to a 5 year old under any circumstances.

As horrible as it sounds, sometimes I really wish that I had underworld ties...and that that I could arrange to “get” those reprehensible bullies and make worm food of them.

When did we replace the word “wrong” with “not acceptable”? It is acceptable, it just happened.

I hope this kid grows up and goes all Bruce Lee on them...

This is the link to the gofundme page:

First of all, beating with rocks and sticks is not bullying, it is assault.

The kids need the living sh1t spanked out of them.

We end up with bullies because no one bigger teaches them a proper lesson early. Parents need to administer corporal punishment. It works, and when you do it right, you rarely have to do it afterwards.

I agree. The kids need that.

Lock up the bullies’ parents.

Tough lesson to learn at six years old. Yeah sometimes guts is enough but darn it helps to have a friend on your six.

What was the ethnicity of the perps?

Spankings won’t touch these kids. They are already monsters and need to be separated from society.

Do you really think they can be rehabilitated?

Where is Otto Adolf Eichmann when we need him...