Let’s begin in the realm of the fanciful.

Assume, for the sake of argument, that powerful, connected people in the intelligence community and in politics worried that a wildcard Trump presidency, unlike another Clinton or Bush, might expose a decade-plus of questionable practices. Disrupt long-established money channels. Reveal secret machinations that could arguably land some people in prison. What exactly might an “insurance policy” against Donald Trump look like?

He would have to be marginalized at every turn. Strategies would encompass politics, the courts, opposition research and the media. He’d have to become mired in lawsuits, distracted by allegations, riddled with calls for impeachment, hounded by investigations. His election must be portrayed as the illegitimate result of a criminal or un-American conspiracy.

To accomplish this, bad actors in the intel community could step up use of surveillance tools as a weapon to look for dirt on Trump before his inauguration. They could rely on dubious political opposition research to secretly argue for wiretaps, plant one or more spies in the Trump campaign, then leak to the press a mix of true and false stories to create a sense of chaos.

Once Trump is in office, a good insurance policy would call for neutralizing the advisers seen as most threatening, including his attorney general. The reigning FBI director could privately send the implicit message that as long as Trump minds his own business, he won’t be named as a target. When the president asks the FBI director to lift the cloud and tell the public their president isn’t under investigation, the FBI director could demur and allow a storm of innuendo to build. Idle chatter benefits the plot. There would be rampant media leaks, both true and false, but none of them would benefit Trump.

All would be well unless the president removes the FBI director. Then, a rider on the insurance policy would kick in. After months of assuring Trump he’s not under investigation, he must now become a focus to keep him away from the Justice Department and the FBI; once an investigation opens, all of Trump’s attempts to affect policy or to dig into allegations against the intelligence community could be portrayed as obstruction of justice.

As crazy as it all sounds, it becomes slightly more plausible when we examine the record and find self-described conspiracies to develop “insurance policies.”

On Aug. 15, 2016, after FBI counterespionage chief Peter Strzok and his FBI girlfriend Lisa Page met with Deputy FBI Director Andrew McCabe, Strzok texted Page that they couldn’t take the risk of Trump getting elected without having “an insurance policy” in place.

Another figure, Benjamin Wittes, chose the same phrase. In October 2016, in his Lawfare blog, Wittes wrote: “What if Trump wins? We need an insurance policy against the unthinkable: Donald Trump’s actually winning the Presidency.”

As it happens, Wittes has acknowledged being a good friend of fired FBI Director James Comey. It’s not hard to imagine that the two men share some beliefs, and even discussed some of the issues involved. In fact, Wittes spoke to a New York Times reporter about Comey's interactions with President Trump, right after Robert Mueller's appointment as special counsel.

So, in his 2016 blog post, Wittes wrote that his vision of an “insurance policy” against Trump would rely on a “Coalition of All Democratic Forces” to challenge and obstruct Trump using the courts as a “tool” and Congress as “a partner or tool.” He even mentioned impeachment — two weeks before Trump was elected.

If this far-fetched idea of an insurance policy were actually true, it also could include tactics memorialized in a memo, written in 2009 by a Democratic strategist working at the time for the liberal smear group Media Matters. It described how to fight a “well funded, presidential-style campaign to discredit and embarrass” targets. Private eyes would probe into their personal lives, courts would be used for lawsuits. “Massive demonstrations” would be organized, Michael Moore would make a negative documentary and “a team of trackers” would stake out targets at events. “Opposition research” would be collected. The targets would be attacked on social media, yard signs posted in their neighborhoods, and a “mole” placed inside their organization.

If there really were an insurance policy against Trump, it might include having ex-intel officials getting hired at national news outlets where they’d monitor and influence news organizations, and be invited to give daily spin on controversies surrounding their own actions. Figures such as former Director of National Intelligence James Clapper, former Comey aide Josh Campbell and others could get hired by CNN; former CIA Director John Brennan and ex-Mueller/Comey aide Chuck Rosenberg could get hired by NBC and MSNBC.

But all that would never really happen. Or if it did, it’s downright silly to think of it as part of an organized insurance policy.

and then we can talk about the insurance file which Huma Abedin created. 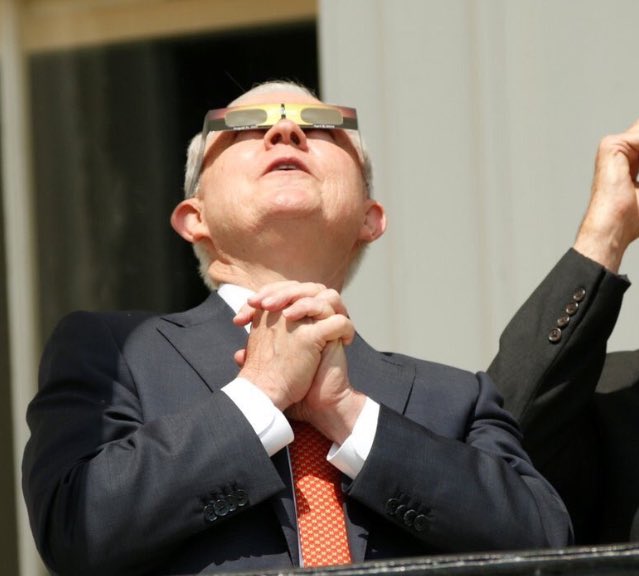 Let’s begin in the realm of the fanciful.

Trump got as far as away as possible from him on that day.

The only way our intelligence community could be corrupt would be if Congress abdicated their oversight responsibility.

Is The Hill suggesting that Congress is incompetent?

The final shipments from Mena.

who at NYT interviewed Wittes, Baker or Haberman?

24 Feb 2018: NYT: Mueller Is Gaining Steam. Should Trump Worry?
by Peter Baker
(at bottom of article) Maggie Haberman contributed reporting from New York
“When you put that all together, the White House should be extremely worried,” said Benjamin Wittes, editor in chief of Lawfare, a blog that analyzes legal issues, and a friend of James B. Comey, the former F.B.I. director who was leading the Russia investigation until being fired by Mr. Trump last year. “You have to ask the question about whether there is a certain measure of self-delusion going on here.”...
https://www.nytimes.com/2018/02/24/us/politics/trump-russia-inquiry-mueller.html

this was front page news at NYT, worth reading it all again:

18 May 2017: NYT: Comey, Unsettled by Trump, Is Said to Have Wanted Him Kept at a Distance
By Michael S. Schmidt
PHOTO: Benjamin Wittes, left, and Mr. Comey during an interview at the Brookings Institution in Washington in 2014.
Mr. Wittes, a senior fellow at the Brookings Institution, the editor in chief of the Lawfare blog and a frequent critic of Mr. Trump, recalls a lunch he had with Mr. Comey in March at which Mr. Comey told him he had spent the first two months of Mr. Trump’s administration trying to preserve distance between the F.B.I. and the White House and educating it on the proper way to interact with the bureau...

After this article was published, Mr. Wittes posted his own account of his conversations with Mr. Comey on Lawfare. It included another discussion, as described earlier to The Times, in which Mr. Wittes told Mr. Comey he was encouraged by the fact that the Senate was likely to confirm Rod J. Rosenstein, a longtime federal prosecutor, as the deputy attorney general.
To Mr. Wittes’s surprise, Mr. Comey did not completely agree with him.

“He said, ‘I don’t know. I have some concerns. He’s good, he’s solid but he’s also a survivor and you don’t survive that long without making some compromises and I’m concerned about that.’”

Weeks after his confirmation, Mr. Rosenstein wrote a memo that Mr. Trump initially cited as the justification for firing Mr. Comey. Mr. Rosenstein told members of the Senate on Thursday that Mr. Trump had already decided to fire him when he wrote it.
https://www.nytimes.com/2017/05/18/us/politics/james-comey-memo-fbi-trump.html

Spot on as always

They don’t seem to want any answers to what’s going on, only to thwart Trump and any exposure of possible corruption from the Deep State.

If it was just dirty Dems you’d think the Republicans would leap at the chance to bury them and their methods. The Silence stinks.

Anything that stalls the Wall gets a thumbs up from Republican trash.

don’t know where this piece went because I can’t access it:

24 Apr 2018: NYT: Opinion | Rod Rosenstein, Robert Mueller and the Art of Survival
by Eric Columbus
(Mr. Columbus served as a senior counsel to the deputy attorney general from 2009 to 2014)
Benjamin Wittes, writing for the Lawfare blog, demanded that Mr. Rosenstein name a special prosecutor and and then resign because of the ... Eight days after Mr. Comey’s firing, Mr. Rosenstein appointed Mr. Mueller as special counsel ...
https://www.nytimes.com/2018/04/24/opinion/rod-rosenstein-trump-mueller.html

worth reading the following again:

19 May: Conservative Treehouse: Comey “Friend”, Benjamin Wittes, Outs Himself As Source for New York Times “Comey Memo” Storyline…
by sundance
Yesterday, a friend of James Comey by the name of Benjamin Wittes, editor and writer for lawfare blog, now steps out and admits he was one of the primary sources for the New York Times Comey Memo article (Michael Schmidt); and in so doing outlines the severity of the political nature of the former FBI Director:

(excerpt) […] I called Schmidt Friday morning after reading his earlier story, which ran the previous evening, about Comey’s dinner with President Trump and the President’s demands at that dinner for a vow of loyalty...ETC

The gist of Benjamin Wittes outline is that he interpreted his friend -the magnanimous harbinger of truth, justice and the American way- James Comey, as expressing a feeling of undue potential influence by horrible Trump that Comey did not feel with the more well regarded Obama. etc. etc. {insert pearl-clutching/couch-fainting violin music here}
Except there’s a problem...

Additionally, the New York Times and Washington Post feeder pools are writing articles based on the hearsay recollections of Mr. Comey’s good friend Mr. Wittes. Those feeder stories are fueling second, third, fourth toward infinity level rehashes and revisions of the same structured woe-is-Jim narrative.
When journalists write articles based on media reports of media reports, the concentric circles of self-serving sanctimony expand toward the infinite horizon of nothingness...
https://theconservativetreehouse.com/2017/05/19/comey-friend-benjamin-wittes-outs-himself-as-source-for-new-york-times-comey-memo-storyline/comment-page-2/

I will wait to have it disproven that the “insurance policy” isn’t the same one as the current mob and the 1930s Capone followers had: assassination. Exactly what was said about JFK according to the Deep State theory of the assassination. One document said it may have to go wet on JFK. It got “wet” quickly when JFK started plans to cut down the power of the corrupt FBI and corrupt CIA.

Sorry but it came into my mind instantly when the Page and Strzok stuff was first reported.

Great article! Thanks for posting.

Want on or off this ping list? Just click Private Reply below and drop me a FReep mail.