Britain’s F-35B stealth fighters are set to achieve initial operating capability at the end of this year. But that is only from land bases, with nine aircraft. It will be another two years before No. 617 Squadron can fly operationally from the first of the country’s two new QEII-class aircraft carriers.

HMS Queen Elizabeth is due to set sail from Portsmouth naval base in the fall for the eastern seaboard of the U.S. There, two American F-35Bs flown by British test pilots will embark for the first time. They will do at-sea takeoffs from the carrier’s ski-jump for the first time. They will also continue development of the shipboard rolling vertical landing technique that they have been developing, to ensure that an F-35B can return to the carrier deck with unused weapons.

A second phase of flying trials on the QEII will follow in 2019, using the British-owned and based F-35Bs with squadron pilots.

But it now seems that the first F-35Bs to fly operationally from the British carriers will be American. The UK has extensively relied on the U.S. Marine Corps (USMC) for working-up, with its first two squadrons being formed and operated from the F-35B base at MCAS Beaufort before transfer to the UK.

Gen. Jon "Dog” Davis, until recently the head of USMC aviation, said last year that the QEIIs are “incredible ships.” USMC F-35Bs will take part in the QEII’s first operational deployment in 2021.

Meanwhile, the second QEII-class carrier, HMS Prince of Wales, is afloat and being fitted out at Rosyth dockyard in Scotland. It is due to go to sea next year, after being handed over by the Aircraft Carrier Alliance that built her and her predecessor (comprising BAE Systems, Babcock, and Thales, in cooperation with the UK Ministry of Defence [MoD]).

The huge cost of these new warships is justified by the British defense establishment in terms of their ability to deliver sovereign power projection globally. However, that has required investment in not only F-35 fighters but also inexpensive conversions of Merlin helicopters for the airborne electronic warfare (AEW) and commando assault role; accompanying warships and attack submarines to defend the carrier; and two new support ships.

A requirement for a dedicated aircraft such as the V-22 Osprey to provide airlift of supplies directly onto the carriers has been dropped for the time being.

DWINDLED NAVY Defense cuts have already reduced the number of destroyers and frigates in service to less than 20. The UK’s National Audit Office (NAO) noted last year that the Navy will “need to change fundamentally how it operates and makes judgments on priorities.” In particular, the NAO warned about shortages of personnel. To address these problems, the MoD decided to withdraw the UK’s only dedicated helicopter carrier, HMS Ocean, this year. The total cost through March 2021 of acquiring the two carriers, and the equipment dedicated to them (e.g. the F-35Bs and AEW helicopters) is more than £14.3 billion ($19.12 billion), plus support and other costs of £2 billion ($2.67 billion).

In a briefing at last year’s Paris Air Show, Rear Admiral Keith Blount noted that the clear, uncluttered flight deck of the QEII-class carrier makes it suitable for various missions, including littoral maneuver without the fighters onboard. For instance, it could be the launch pad for an interventionist landing of Royal Marines from Merlin Mk4 helicopters. Blount also described a humanitarian assistance role, noting that if the QEII-class carrier had been available in 2016, it could have been stationed off the West African coast to assist in the Ebola crisis.

The QEII-class carrier has already done sea trials with a few Merlin and Chinook helicopters onboard. Ultimately the UK’s Wildcat and Apache attack helicopters should also be able to operate from the carriers.

The MoD signed a contract worth £269 million ($360 million) in November 2016 for the Crowsnest AEW system. Lockheed Martin UK is the system integrator, with Thales UK providing the radar and Leonardo Helicopters modifying the airframes. Thales is updating and repackaging for fitting to Merlin Mk2 helicopters the Searchwater radar and Cerberus mission system that it previously provided for seven Royal Navy Sea Kings. The Merlin Mk2 is the UK’s anti-submarine warfare (ASW) helicopter, and the fleet of 30 will be modified to accept Crowsnest, although only 10 of the systems are being acquired. Supposedly, the AEW system can replace the ASW system with only 24 hours of work by ground crews. The in-service date is July 2019.

When configured for carrier strike, the carriers could embark two F-35B squadrons, each with 24 jets. Another 12 could be added “in extremis,” says the MoD. But the UK has only committed to buying a total of 48 F-35Bs so far, for delivery between now and 2025. About 12 of these will be in a land-based operational conversion unit.

A report last year by British defense think-tank Royal United Services Institute noted that “Russian and China have developed the surveillance and precision strike capabilities to put Western surface ships at serious risk…missiles costing much less than half a million pounds could at least disable a British aircraft carrier that costs more than £3 billion ($4.01 billion).”

The MoD has said that when operating as a “sovereign carrier strike group…against a very high-threat environment,” the carrier would be accompanied by two air defense destroyers. The Royal Navy’s Type 45 destroyers are equipped with the Sea Viper air defense system including the Aster 15/30 anti-missile that can handle multiple targets. But there are only six Type 45s in total.

The UK’s latest missile intercept system is the MBDA Sea Ceptor, which is being fitted to Type 23 and their replacement Type 26 frigates. When deployed with a QEII-class carrier, it would be the second line of defense. The carrier itself has the Phalanx 30mm gun system for close-in air defense. The Royal Navy also argues that “non-organic” assets can also help protect the carrier, such as land-based E-3 Sentry AEW and P-8 Poseidon ASW aircraft.

A senior MoD officer told a parliamentary committee last October that “we are acutely aware of a number of threats that are posed to a carrier strike group.” He added that provisions had been made to mitigate the threat but he was unwilling to specify them in a public forum, except to suggest that “there is a series of things you will do to prevent that missile from ever being fired at your carrier.” England’s two new QEII-class aircraft carriers will accommodate jump-launched versions of F-35Bs. But it will be two years before the first squadron becomes operational.

Isn’t this the platform whose systems use Windows XP? Briliant.

At least it doesn’t run on that system Turing came up with.

I do like the skateboard ramp. Good recreational fun for the sailors...that is if the Muslim captain approves.

No worries. My sources tell me that the Royal Navy is busy upgrading their ship systems to Windows Vista.

Their defense budget is only something on the order of 50 billion pounds annually. Hardly enough to defend their own borders, let alone project power.

8 posted on 07/11/2018 7:39:48 AM PDT by Mr Ramsbotham (Laws against sodomy are honored in the breech.)
[ Post Reply | Private Reply | To 1 | View Replies]
To: All
“...The huge cost of these new warships is justified by the British defense establishment in terms of their ability to deliver sovereign power projection globally...”

The huge expense was justified by the UK govt. to give Scottish ship workers jobs before the “Independent Scotland” referendum. :^)

Britain will soon go over to Muslim control. Mayor Khan of London is likely a future Prime Minister. I am not sure that I want their military to have anything that could be a threat to other Western countries.

Why does it need 2 towers?

They tried running US Navy ships with Widows but after many reboots dropped it. It gave new meaning to the blue screen of death.

With little to no escorts available they are easy picking for a determined enemy, especially if they have half way decent subs. The Royal Navy is a hollow shell of its self and these two capital ships could become the 21st century of HMS Hood.

Can’t they combine the 2?

They just have to pick the right target. Like Argentina.

Maybe a small Caribbean island nation next time? Or Papua New Guinea, those guys are getting a little full of themselves! 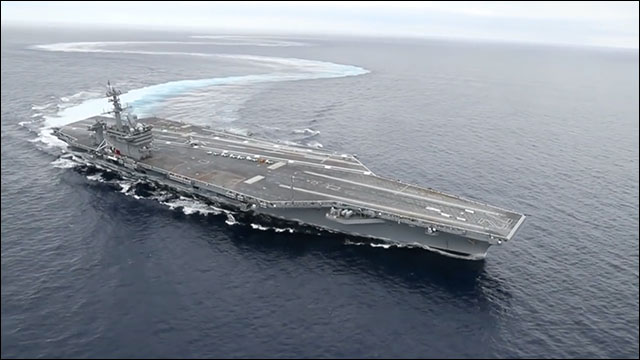