Dem chief of staff tried to expose suspected theft ring on Capitol Hill, but since it was... (Awan)
Biz Pac Review ^ | 6/25/18 | Luke Rosiak

Rep. Yvette Clarke’s deputy chief of staff came into the office on a Saturday in December 2015 and caught the New York Democrat’s part-time IT aide, Abid Awan, rummaging through the congresswoman’s work area with new iPods and other equipment strewn around the room, according to a House document and interviews with Hill staff.

Wendy Anderson told Abid to get out of the office, the document said. She told Capitol Hill investigators that she soon suspected Clarke’s chief of staff, Shelley Davis, was working with Abid on a theft scheme, multiple House staffers with knowledge of the situation told The Daily Caller News Foundation. They also said that Anderson pushed for Abid’s firing.

But Clarke did not fire Abid until six months after the congresswoman formally acknowledged that $120,000 in equipment was missing, records show — not until after House investigators independently announced a review that would potentially catch financial discrepancies. Even then, Anderson told investigators she believed another top staffer in Clarke’s office was subverting their efforts, a House staffer with knowledge of the investigation said.

Four months later, Anderson took a job with another congressional office. Clarke’s office declined to say under what terms she left.

More obstruction. Full title - Dem chief of staff tried to expose suspected theft ring on Capitol Hill, but since it was one of their own...

Demonicrats are, themselves, a theft ring. The Demonicrats are thieves of freedom and truth, as well as the lives of children of the womb.

In the yesterdays of justice, the Demonicrats would have been tried, convicted, sentenced and hanged, with only a jury break for lunch.

Now the Demonicrats can rely on their fellow travellers, the Deep Staters and the fifth-column leftist media to cover up their treasonous crimes.

Things just get curiouser and curiouser.

The Democrats believed their own fantasy propaganda: that they were going to win every election, destroy the Republican Party, and seize power of every elected branch of government and every government agency. They would hold this power in perpetuity and therefore, they could operate as an organized criminal enterprise. Their problem is that they got impatient and started their criminal activities before Hillary Clinton were declared the winner of the 2016 election.

Thanx for linking us up 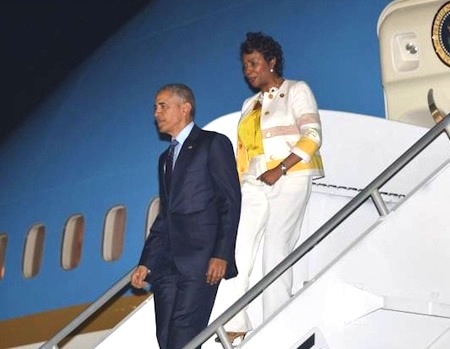 Clarke She describes herself as a "Queen of the Caribbean;"
She belongs to the Congressional Caribbean Caucus.
Clarke made friends quickly, what with her knowledge of offshore banking havens in the Caribbean.

HOW THE IT SCAM WAS RIGGED FOR PROFIT----Democrat NY Cong Yvette Clarke's office approved a $120,000 "write-off" of tax-paid tech Equipment Linked To the Awan clan (made the tax dollars and the equipment disappear).The missing govt-issue tax-paid devices included many iPhones and iPads. At $800 each, Cong Yvette Clarke's $120,000 write-off would force taxpayers to pay for 150 electronic items for her staff of 16......that's about 10 iPhones and iPads each.

Democrat Cong Yvette Clarke's tax-paid payroll records indicate she has 16 employees......why did Cong Clarke need so many electronics for that small staff? She was also oblivious to the fact that all that expensive govt-paid equipment she ordered was delivered to Imran's house.

According to ace reporting by the Daily Caller, Cong Clarke's office casually signed off on what appears to be a theft ring operating inside the Democrat Congressional Caucus then-headed by Cong Becerra.The facts suggest the Awan gang was running the oldest of scams......selling computer gear out the back door after first reporting it stolen to authorities. (hat tip The Daily Caller).

NOTE: Democrat Clarke is only one employer audited, so far. Patterns of theft in other Democrat offices have yet to be investigated.

EXCERPT....then-Democrat Cong Becerra never publicly acknowledged nor demanded consequences for the cyber breach on his House Democratic Caucus server (similar in nature to the DNC)......and eighteen months later, no one has been charged....not surprising since the elected Democrats don’t appear to be asking for it......

This is a huge red flag. This is organized crime on Capitol Hill.

Democrats have apparently taken the "Oath of Omerta."

Sessions will get right on this.

What data is in those stolen devices that scares the Democratic party so much?

9 posted on 07/01/2018 6:47:48 PM PDT by Retvet (Retvet)
[ Post Reply | Private Reply | To 1 | View Replies]
To: centurion316
Their problem is that they got impatient and started their criminal activities before Hillary Clinton were declared the winner of the 2016 election.

These behavioral deficits are a big reason why they become criminals in the first place.

It is so easy to figure out the moves of these morons. We don’t deserve getting any points for noticing their Three Stooges moves.

Thanks - I saw some headline about this but then lost track of where the article was.

16 posted on 07/01/2018 8:40:49 PM PDT by MadMax, the Grinning Reaper
[ Post Reply | Private Reply | To 7 | View Replies]
To: Liz; bitt
NOTE: Democrat Clarke is only one employer audited, so far. Patterns of theft in other Democrat offices have yet to be investigated.

Becerra is like the mystery of “the dog that didnt bark.”

I agree, that Becerra is a bitch and a far-left wackjob.

19 posted on 07/02/2018 12:14:12 AM PDT by MadMax, the Grinning Reaper
[ Post Reply | Private Reply | To 18 | View Replies]
To: centurion316
Their fearless leader Obama had Democrats believing the propaganda: he was invincible, he could move the
govt apparat against any American that stood in his way. Hillary would serve out his third term.
Everything
was in place. They'd destroy the Republican Party, and seize total power, power to be held in perpetuity. Operating
as an organized criminal enterprise was encouraged. The problem: they were so cocksure of themselves, their criminal
activities escalated before Hillary Clinton was scheduled to be declared the 2016 winner.

That's the most accurate assessment of the conniving Democrats that has surfaced, to date....kudos.
No wonder they're so desperate. They have plenty to hide......and Trump knows exactly where to look.