Republican strategist Steve Schmidt tore into Donald Trump while appearing on MSNBC today — calling the president an “imbecile” for his trade wars and adding that he has “no idea what he’s talking about.”

As news circulated this morning that the stock market dropped dramatically after China responded to Trump’s tariffs with trade restrictions of their own, the president denied that there is a “trade war” happening, despite all evidence pointing to the opposite being true.

Schmidt noted this while discussing the issue with a fired-up Stephanie Ruhle this morning:

I don’t like the idea of a trade war.

At the same time, I haven’t cared for the trade war we’ve been in, where some nations used tactics to game trade and got away with it for decades.

We have been in a trade war for nearly 30 years.

Now we’re beginning to engage and everyone is wetting themselves.

Where were they for the last 30 years? 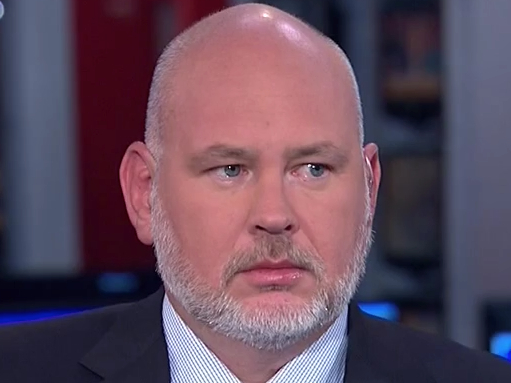 Starting to get the Meathead look.

This dork probably supported one of the brain dead GOP candidates, such as Jeb.

I think he was a McCain guy. Real traitorous schmuck.

Let me guess, another apologist for Jeb, Mitt, McCain, and other Uniparty stalwarts, eh?

So we finally have a president who responds to China’s underhanded tactics against us, and somehow, the trade war is the president’s fault?

At what point do the dolts who say this stuff realize that we’ve been taking it in the chin for decades, and that continuing to be passive to China’s unfair trade practices is detrimental to our economy? When the economy collapses, is that when they will finally wake up?

He turned during GWB years. I saw a book party for him on C span and he was hob nobbing with the elites at someones home. I could tell then he was about power and money. he feels he is someone now!!!

That says enough right there...

Most of it was food.

China sold $505,000,000,000 worth of goods to America. Look in any Walmart, and Target, any K-Mart, any tool store, any stereo store, any computer store ANYWHERE in America.

All of it, is now made in China.

Trump is 100% correct, and is the first person to stand up for America.

In an entire generation.

This isn’t just a trade war...Thanks to the last 28 years of bushes, clintons and o’muslims, who weakened America and bolstered China, this may become a real war.

Hasn’t won a campaign in 20 years.

There is another neverTrumper out there with a book. I believe another gopE genius who couldn’t run a successful campaign.

Everyone wants in on the action.

You do realize this one is from several days ago?

17 posted on 04/08/2018 5:03:50 PM PDT by Flycatcher (God speaks to us, through the supernal lightness of birds, in a special type of poetry.)
[ Post Reply | Private Reply | To 1 | View Replies]
To: GuavaCheesePuff
calling the president an “imbecile” for his trade wars and adding that he has “no idea what he’s talking about.”

The real imbeciles are the ones who signed off on these free trade deals in the first place, Democrat AND Republican. President Trump is just trying to fix the damage they caused.

I had to laugh out loud when I read the headline.

Since when has Stephen Schmidt been a republican?

He is the worst of the worst. No loyalty, no principles, and really nothing to warrant a headline in any publication.