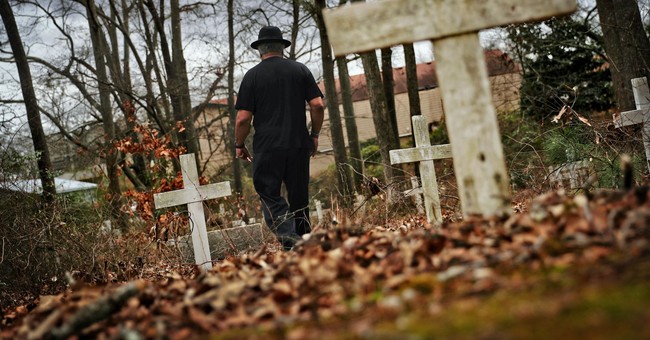 Last week, I was driving south from Hattiesburg to Biloxi on my way to spend a couple of days on the Mississippi Gulf Coast. I decided to take a different route than my usual trek south on US Highway 49. Instead, I took Interstate 59 to MS Highway 53. About a mile or two after taking the exit, I came upon Juniper Grove Road. It led me to Juniper Grove Baptist Church, which sits in front of a graveyard where my cousin Theodore Gilmore Bilbo is buried. I decided to pull over and visit his gravesite, given that I had never been and that Bilbo is my most infamous relative. As I approached the church, I saw a sign that read, “Life has many choices. Eternity has 2. What is yours? Heaven or hell?”

As soon as I got out of my car, I was flooded with the sight of familiar names. The cemetery was full of Resters, Ladners, and Bilbos – all from my mother’s side of the family. I immediately saw the grave of Annie Bilbo Rester - my great, great, great, grandmother who died in 1915. She was the aunt of Theodore Bilbo, which makes him my fifth cousin. Off in the distance I saw his marble tomb, which towered above all the other grave markers in the cemetery.

As I made my way over to cousin Theodore’s grave I could see that his accomplishments were etched on the side of the giant tomb that stood as a monument to the notorious racist Democrat. The side of the tomb reminded us that Bilbo served as Lt. Governor, then Governor, and then United States Senator. But below those obvious accomplishments was listed another, “Author of ‘Take Your Choice,’ 1946,” which happened to be the year he left the Senate. That was the year the Republicans had refused to seat him after a committee found he had accepted bribes. He then went home to seek medical treatment for oral cancer. He died the next year.

His tomb does not say it, but the full title of Bilbo’s 1946 book was, “Take Your Choice: Separation or Mongrelization.” In the book, Bilbo argued that the survival of our nation hinged upon whether we would be able to prevent the large scale mixing of the races. He feared that a breakdown of racial barriers would result in racial intermarrying, which, in turn, would produce a nation that was no longer black and white – but instead a nation of “mongrels.” He considered this to be a threat to the integrity of the white race. He also argued that it was a threat to the integrity of the black race.

You’ve probably heard such calls for racial purity before. Muhammad Ali would echo them years later – and would be given a pass by a fawning media willing to forgive anything he said after he refused service in the Vietnam War. But coming from Bilbo it was more dangerous. Bilbo was not a semi-literate boxer. He had an undergraduate degree from Vanderbilt and a law degree from Michigan. He was also a U.S. Senator who could craft bills meant to advance his notions of racial separatism. And so he did.

Senator Bilbo used that power to craft an amendment (to the 1938 work relief bill), which would have relocated 12 million American blacks to Africa. The amendment failed, but Bilbo would defend it for the rest of his life. And he would do so in the name of God. His ideas of white supremacy and racial separatism were both advanced by making extensive biblical references. He really seemed to think he had God on his side.

I certainly believe in hell. And so did Senator Bilbo. We know that because he talked about it a lot. For example, when he was a participant in the filibuster of the anti-lynching bill before the Senate in 1938, he said the following:

“If you succeed in the passage of this bill, you will open the floodgates of hell in the South. Raping, mobbing, lynching, race riots, and crime will be increased a thousand fold; and upon your garments and the garments of those who are responsible for the passage of the measure will be the blood of the raped and outraged daughters of Dixie, as well as the blood of the perpetrators of these crimes that the red-blooded Anglo-Saxon white Southern men will not tolerate.”

Senator Bilbo was never content to justify white supremacy by relying on grim predictions of the future or on interpretations of the decline of past cultures. He had to bring God into the picture and use the Lord’s name to justify evil. That’s why he is rotting in hell as we speak.

Cousin Theodore is no doubt tormented by the fact that hell is not racially segregated. Its doors were opened for the white man who tried to advance white supremacy in the name of God. And its doors will be opened for a black abortion doctor who justifies dismemberment of innocent babies in the name of Christian compassion.

That abortion doctor is still alive and kicking. He recently advanced his evil ideology on one of Mississippi’s public university campuses. In the process, he defended an industry that has murdered far more blacks than Bilbo’s KKK.

Dr. Willie Parker will be the subject of the next installment.

Haha, Fortes, that you were called names ad nauseum just means you were right. Don’t you know that by now??

I like your last paragraph. It illuminates a subject I was slightly unclear about.

Elsie's 'version' is a bit more in line with what the Book alludes to:

NO one is 'rotting in Hell' just yet.

Psalm 13:3
Look on me and answer, Lord my God. Give light to my eyes, or I will sleep in death,
Psalm 90:5
Yet you sweep people away in the sleep of death— they are like the new grass of the morning:
Daniel 12:2
Multitudes who sleep in the dust of the earth will awake: some to everlasting life, others to shame and everlasting contempt.


John 11:12-13
His disciples replied, “Lord, if he sleeps, he will get better.”
Jesus had been speaking of his death, but his disciples thought he meant natural sleep.

1 Corinthians 15:51-52
Listen, I tell you a mystery:
We will not all sleep, but we will all be changed—in a flash, in the twinkling of an eye, at the last trumpet.
For the trumpet will sound, the dead will be raised imperishable, and we will be changed.

Ephesians 5:14
This is why it is said: “Wake up, sleeper, rise from the dead, and Christ will shine on you.”

1 Thessalonians 4:13
Brothers and sisters, we do not want you to be uninformed about those who sleep in death, so that you do not grieve like the rest of mankind, who have no hope.

Exodus 32:32-33
But now, if you will forgive their sin—but if not, please blot me out of your book that you have written.”  But the Lord said to Moses, “Whoever has sinned against me, I will blot out of my book.

Daniel 12:1
“At that time shall arise Michael, the great prince who has charge of your people. And there shall be a time of trouble, such as never has been since there was a nation till that time. But at that time your people shall be delivered, everyone whose name shall be found written in the book.
Philippians 4:3
And I intreat thee also, true yokefellow, help those women which laboured with me in the gospel, with Clement also, and with other my fellowlabourers, whose names are in the book of life.

Revelation 3:5
He that overcometh, the same shall be clothed in white raiment; and I will not blot out his name out of the book of life, but I will confess his name before my Father, and before his angels.

I appreciate those who truly let Scripture guide their thinking.

Now if it would just guide my ACTIONS a bit more!

That dichotomy doesn’t even exist in heaven—look ahead!

Thanks glad it was helpful for you.