The first six people of approximately two hundred arrested for rioting on inauguration day faced a jury this past week. 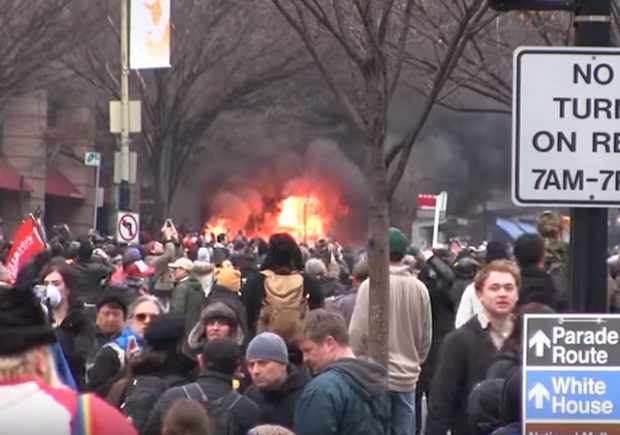 TOPICS: Constitution/Conservatism; Crime/Corruption; Culture/Society; Government
KEYWORDS: dc; justice; nullification; riot; trumpinaugural
**snip** The verdict is a victory not only for the six defendants and their lawyers, but for other defense attorneys, anti-Trump activists, and free speech advocates who had criticized the mass arrests and prosecution as examples of government overreach and who worried the case signaled a new era of criminalizing political dissent.

“The jury thoughtfully distinguished First Amendment rights from criminal conduct,” Steven McCool, one of the defense lawyers, told BuzzFeed News in an email. “They vindicated the constitutional rights of these defendants and all of us.

Asked about the verdict, one of the defendants, Alexei Wood, told BuzzFeed News in a text message: “Fuk them so hard.”

I only care about crying guy.

“I only care about crying guy.”

so many idiots were crying that day, it was not only hard to keep track but it was hard to stop laughing.

Gonna be tough to get convictions in DC courts.

Rule of law? We don’t need no stinking rule of law.

Should this country be stupid (or crooked) to let Democrats have power, there is nothing to prevent future riots.

Goodbye, republic. It was nice while it lasted.

‘I related news: AG jeff Sessions said he worried that the protestors couldn’t get a fair trial in DC, so he was moving the case ND.’/sarc

7 posted on 12/23/2017 8:02:39 AM PST by Beagle8U (Wake up and smell the Covfef)
[ Post Reply | Private Reply | To 1 | View Replies]
To: ptsal
DC has a law against wearing hoods or masks in public. All well and good, but then there are exceptions to the law that are nebulous enough that any jury that wanted to find an exception to the law could find an exception. (And if a jury didn't want to for, say, a "peaceful protest" by the KKK, it could find reason to convict.)

Only a minority of states even have laws against wearing hoods or masks in public. Perhaps the DOJ could write "model" laws and link them to grants that would make convictions easier. In the meantime, maybe harder rubber bullets are called for. (And for the rest of us, to stay away from cities at all times unless it's absolutely necessary. Most, including DC, have turned into such third-world **** holes that avoiding them doesn't require any encouragement.)

No surprise here. The jury is made up of DC residents, where maybe Trump got 4% of the vote.

The Kate Steinle jury was not an anomaly.

These juries are guerrilla warfare.

See what claiming that burning an American Flag is speech, leads to.