Exocet missile: how the sinking of HMS Sheffield made it famous
theguardian ^ | 15 October 2017 | Ian Cobain 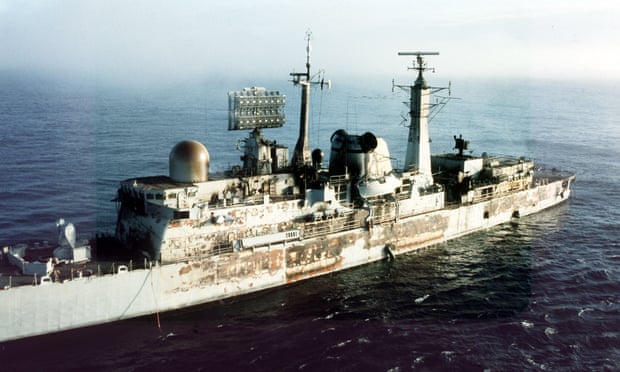 The damage to HMS Sheffield after it was struck by an Exocet missile in May 1982. Photograph: PA/PA Archive/Press Association Ima

The British public became fascinated by the Exocet missile after one sunk HMS Sheffield shortly after the outbreak of the Falklands war in 1982.

Before long, the word Exocet was being used as a metaphor for anything that was suddenly and unstoppably destructive: a winning argument, for example, or a footballer’s shot on goal.

Although Argentina possessed only five of the missiles, Margaret Thatcher’s war cabinet was also fascinated by them, because they knew a successful strike on a Royal Navy aircraft carrier could fatally compromise the Falklands campaign.

Revealed: catalogue of failings that sank Falklands warship HMS Sheffield Read more Attempts were made to dissuade the French manufacturer from selling any of its missiles to Peru, for fear they would be passed to Argentina. Plans were also put in place to board any vessels thought to be carrying any missiles to Argentina, although these steps were never required.

A plan was drawn up to land special forces on the Argentinian airbase where the Super Étendard fighters that carried Exocets were based.

The operation was stalled by poor weather, when a helicopter carrying an SAS reconnaissance team was forced to land in Chile.

One Exocet hit and sank a requisitioned container ship, the Atlantic Conveyor, with the loss of 12 lives. It is possible that the missile had been deflected from the Royal Navy’s main aircraft carrier, HMS Hermes, after it fired chaff clouds.

The Atlantic Conveyor had been carrying a large number of helicopters and its loss forced British troops to march long distances across the islands.

How did the ship sink?

I see blast and fire damage topside, but no hull damage (in the picture at least).

Brezhnev took Afghanistan.
Begin took Beirut.
Galtieri took the Union Jack.
And Maggie, over lunch one day,
Took a cruiser with all hands.
Apparently, to make him give it back.

Correct. The missile didn't even detonate! The impact started fires that the crew was unable to control (the impact destroyed fire suppression infrastructure) and the ship eventually sank due to fire damage.

I recall I think she was abandoned because they were unable to extinguish burning aluminum superstructure.

They towed her after the fires were put out to be dry docked but the temp patch over the hole in the hull failed and she sunk in heavy seas.

Too many years since I read about the chain of errors that led to the missile hitting at all.

With the clusterf*cks our navy has been doing lately, time to review what went wrong. The Brits were certainly not having a sensitivity training seminar at the time.

The superstructure was not Aluminum.

US anti-ship cruise missile capabilities have been sadly neglected since the end of the Cold War. Thankfully, this will be addressed in the near future with the deployment of the AGM-158C LRASM (Long Range Anti-Ship Missile), which should go into service next year.

With its ability to be launched from Mk 41 Vertical Launch Systems, it will give our ships a much needed boost in anti-ship offense.

Recent re-analysis has concluded that the Exocet actually *did* detonate and performed as advertised.

From the Wiki page (which is a pretty good summary):

***
At approximately 10:00 on 4 May, Sheffield was at defence watches, second degree readiness, one of three Type 42 destroyers operating as a forward ASW picket for the task force, south-east of the Falklands. On some task force ships (including Sheffield) the threat from the type 209 submarine was seen as higher priority than the threat from the air. Sheffield’s radar operators had difficulty distinguishing Mirage and Super Etendard aircraft, and the destroyer may have lacked effective IFF or radar jamming.[8] HMS Glasgow, operating at high readiness, detected two Super Etendard ‘Agave’ (Exocet-capable) targets on 965M main surveillance radar, 40 nautical miles (74 km) out[9] and immediately communicated the warning codeword ‘Handbrake’ by UHF and HF to all task force ships. Sheffield had assessed the Exocet threat overrated for the previous two days, and assessed another as a false alarm (as did HMS Invincible). Sheffield apparently did not hear the incoming aircraft and missiles, detect them on its electronic support measures (ESM) sets, or see a radar contact on its screens swept by its own radar. No detections were reported via data link from Glasgow. Sheffield failed to go to action stations, launch chaff, prepare the 4.5” gun and Sea Dart missiles, or indeed take any action or even inform the captain [10] Sheffield had relieved her sister ship Coventry as the latter was having technical trouble with her type 965 radar.[11] Sheffield and Coventry were chatting over UHF. Communications ceased until an unidentified message was heard flatly stating, “Sheffield is hit.”[11]

Sheffield picked up the incoming missiles on her type 965 radar (an interim fitting until the Type 1022 set was available); the operations officer informed the missile director, who queried the contacts in the ADAWS 4 fire control system.[11] Critically, the Sheffield did not have an ECM jammer fitted[12] and lacked other critical ECM equipment, and failed to go to action stations or a heightened state of readiness, or to do anything to prepare weapons or the decoy system. The launch aircraft had not been detected as the British had expected, and it was not until smoke was sighted that the target was confirmed as sea skimming missiles. Five seconds later, an Exocet hit Sheffield amidships, approximately 8 feet (2.4 m) above the waterline on deck 2, tearing a gash in the hull.[11] The other missile splashed into the sea a half mile off her port beam.[13]

The flagship, HMS Hermes, dispatched the escorts Arrow and Yarmouth to investigate, and a helicopter was launched. Confusion reigned until Sheffield’s Lynx helicopter unexpectedly landed aboard Hermes carrying the air operations officer and operations officer,[11] confirming the strike.

Such was the lack of warning that there was no time to engage in defensive manoeuvres, leading to a change in British policy whereby any Royal Navy vessel that suspected it might be under missile attack would turn toward the threat, accelerate to maximum speed and fire chaff to prevent a ship being caught defenceless again. The codeword used to start this procedure was ‘handbrake’, which had to be broadcast once the signal of the Agave radar of the Super Étendard was picked up.[14]

The initial Ministry of Defence (MOD) Board of Inquiry on the sinking of the Sheffield concluded that, based upon available evidence, the warhead did not detonate.[15] However, some of the crew and members of the task force believed that the missile’s 165 kilograms (364 lb) warhead had detonated.[11] This was supported by a MOD re-assessment of the loss of Sheffield, which reported in summer 2015. In a paper delivered to the RINA Warship Conference in Bath in June 2015, it was concluded that the Exocet warhead did indeed detonate inside Sheffield, with the results supported by analysis using modern damage analysis tools not available in 1982 and evidence from weapon hits and trials conducted since the end of the Falklands campaign.[16]
The grave of Neil Goodall, cook on Sheffield, who died in the Argentine attack. Lavender Hill Cemetery, Enfield.

Regardless, the impact of the missile and the burning rocket motor set Sheffield ablaze. Some accounts suggest that the initial impact of the missile immediately crippled the ship’s onboard electricity generating systems, but this only affected certain parts of the ship, which caused ventilation problems. The missile strike also fractured the water main,[17] preventing the anti-fire mechanisms from operating effectively, and thereby dooming the ship to be consumed by the raging fire. The Royal Navy Court of Inquiry suggested the critical factors leading to loss of Sheffield were:

Slow response of the available 909 Sea Dart tracking radar and its operator limited the possible response. The spread of the fire was not adequately controlled due to the presence of ignitable material coverings and lack of adequate curtains and sealing to restrict smoke and fires. Captain Salt’s handing of the ship during the four hours over which the fires were fought were not faulted, nor was his decision to abandon ship due to the risk of fires igniting the Sea Dart magazine, the exposed position to air attack of HMS Arrow and Yarmouth assisting the firefighting, and fact that the combat capability of the destroyer was irredeemably lost.

As Sheffield’s crew were waiting to be rescued, Sub-lieutenant Carrington-Wood led the crew in singing “Always Look on the Bright Side of Life” from Monty Python’s Life of Brian.[19]

Sheffield didn’t even have a CIWS system and completely relied on their Sea Dart main armament. Kinda like a lot of our Burkes, indeed a lot of our Navy does right now since our admirals were morons and removed both CIWS and RAM installations from our ships.

the fletcher memorial
home for incurable tyrants and kings

How did the ship sink?

Because it’s what the Brits call al-u-min-i-um which the ship was made of. When heated to a given temp the stuff burns like a 4th of July sparkler which by the way are also made from using the powered form.and a key component of flash powder.

***
The sinking of Sheffield is sometimes blamed on a superstructure made wholly or partially from aluminium, the melting point and ignition temperature of which are significantly lower than those of steel. However, this is incorrect as Sheffield’s superstructure was made entirely of steel.[21] The confusion is related to the US and British Navies abandoning aluminium after several fires in the 1970s involving both the USS Belknap and HMS Amazon, respectively, and also other ships that had aluminium superstructures.[21][a] The sinking of the Type 21 frigates Antelope and Ardent, both of which had aluminium superstructures, probably also had an effect on this belief, though these cases are again incorrect and the presence of aluminium had nothing to do with their loss.[22][23][24]
***

Of the two missiles that hit the USS Stark, one exploded and one did not. The Exocet that exploded actually caused minor damage, but the Exocet that did not, simply caused fires with the fuel the missile still had on board, causing much more damage. The Exocet missile had a reputation for not detonating, but causing more damage in not working properly than when it did.