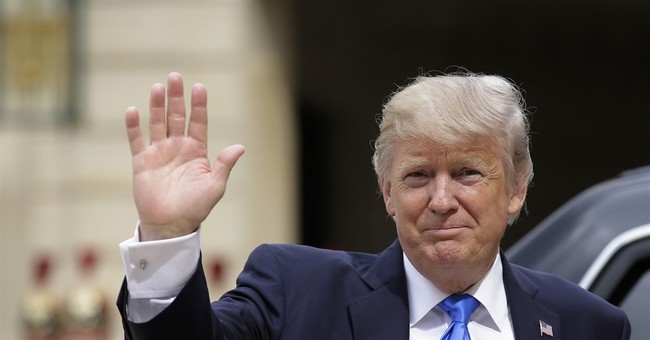 My Leftist friends (as well as many ardent #NeverTrumpers) constantly ask me if I’m not bothered by Donald Trump’s lack of decorum. They ask if I don’t think his tweets are “beneath the dignity of the office.” Here’s my answer:

We Right-thinking people have tried dignity. There could not have been a man of more quiet dignity than George W. Bush as he suffered the outrageous lies and politically motivated hatreds that undermined his presidency. We tried statesmanship. Could there be another human being on this earth who so desperately prized “collegiality” as John McCain? We tried propriety – has there been a nicer human being ever than Mitt Romney? And the results were always the same.

This is because, while we were playing by the rules of dignity, collegiality and propriety, the Left has been, for the past 60 years, engaged in a knife fight where the only rules are those of Saul Alinsky and the Chicago mob.

I don’t find anything “dignified,” “collegial” or “proper” about Barack Obama’s lying about what went down on the streets of Ferguson in order to ramp up racial hatreds because racial hatreds serve the Democratic Party. I don’t see anything “dignified” in lying about the deaths of four Americans in Benghazi and imprisoning an innocent filmmaker to cover your tracks. I don’t see anything “statesman-like” in weaponizing the IRS to be used to destroy your political opponents and any dissent. Yes, Obama was “articulate” and “polished” but in no way was he in the least bit “dignified,” “collegial” or “proper.”

The Left has been engaged in a war against America since the rise of the Children of the ‘60s. To them, it has been an all-out war where nothing is held sacred and nothing is seen as beyond the pale. It has been a war they’ve fought with violence, the threat of violence, demagoguery and lies from day one – the violent take-over of the universities – till today.

The problem is that, through these years, the Left has been the only side fighting this war. While the Left has been taking a knife to anyone who stands in their way, the Right has continued to act with dignity, collegiality and propriety.

With Donald Trump, this all has come to an end. Donald Trump is America’s first wartime president in the Culture War.

During wartime, things like “dignity” and “collegiality” simply aren’t the most essential qualities one looks for in their warriors. Ulysses Grant was a drunk whose behavior in peacetime might well have seen him drummed out of the Army for conduct unbecoming. Had Abraham Lincoln applied the peacetime rules of propriety and booted Grant, the Democrats might well still be holding their slaves today. Lincoln rightly recognized that, “I cannot spare this man. He fights.”

General George Patton was a vulgar-talking, son-of-a-bitch. In peacetime, this might have seen him stripped of rank. But, had Franklin Roosevelt applied the normal rules of decorum, then Hitler and the Socialists would barely be five decades into their thousand-year Reich.

Trump is fighting. And what’s particularly delicious is that, like Patton standing over the battlefield as his tanks obliterated Rommel’s, he’s shouting, “You magnificent bastards, I read your book!” That is just the icing on the cake, but it’s wonderful to see that not only is Trump fighting, he’s defeating the Left using their own tactics.

That book is Saul Alinsky’s Rules for Radicals – a book so essential to the Liberals’ war against America that it is and was the playbook for the entire Obama administration and the subject of Hillary Clinton’s senior thesis. It is a book of such pure evil, that, just as the rest of us would dedicate our book to those we most love or those to whom we are most indebted, Alinsky dedicated his book to Lucifer.

Trump’s tweets may seem rash and unconsidered but, in reality, he is doing exactly what Alinsky suggested his followers do.

First, instead of going after “the fake media” – and they are so fake that they have literally gotten every single significant story of the past 60 years not just wrong, but diametrically opposed to the truth, from the Tet Offensive to Benghazi, to what really happened on the streets of Ferguson, Missouri – Trump isolated CNN. He made it personal. Then, just as Alinsky suggests, he employs ridicule which Alinsky described as “the most powerful weapon of all.”

Everyone gets that it’s not just CNN – in fact, in a world where Al Sharpton and Rachel Maddow, Paul Krugman and Nicholas Kristof are people of influence and whose “reporting” is in no way significantly different than CNN’s – CNN is just a piker.

Most importantly, Trump’s tweets have put CNN in an untenable and unwinnable position. With Trump’s ability to go around them, they cannot simply stand pat. They need to respond. This leaves them with only two choices.

The problem for CNN (et al.) with the former is that, if they were to start honestly reporting the news, that would be the end of the Democratic Party they serve. It is nothing but the incessant use of fake news (read: propaganda) that keeps the Left alive.

This makes “going high” a non-starter for CNN. This leaves them no other option but to ratchet up the fake news, conjuring up the next “nothing burger” and devoting 24 hours a day to hysterical rants about how it’s “worse than Nixon.”

And, by causing their hysteria, Trump has forced them into numerous, highly embarrassing and discrediting mistakes. Thus, in their desperation, they have lowered their standards even further and run with articles so clearly fake that, even with the liberal (lower case “l”) libel laws protecting the media, they’ve had to wholly retract and erase their stories repeatedly.

Their flailing at Trump has even seen them cross the line into criminality, with CNN using their vast corporate fortune to hunt down a private citizen for having made fun of them in an Internet meme. This threat to “dox” – release of personal information to encourage co-ideologists to visit violence upon him and his family -- a political satirist was chilling in that it clearly wasn’t meant just for him. If it were, there would have been no reason for CNN to have made their “deal” with him public.

Instead, CNN – playing by “Chicago Rules” – was sending a message to any and all: dissent will not be tolerated.

This heavy-handed and hysterical response to a joke on the Internet has backfired on CNN, giving rise to only more righteous ridicule.

So, to my friends on the Left – and the #NeverTrumpers as well -- do I wish we lived in a time when our president could be “collegial” and “dignified” and “proper”? Of course I do. These aren’t those times. This is war. And it’s a war that the Left has been fighting without opposition for the past 50 years.

So, say anything you want about this president – I get it, he can be vulgar, he can be crude, he can be undignified at times. I don’t care. I can’t spare this man. He fights.

This summarizes the past 8 months in one sentence. Great read.(For those of us who actually read the articles on which we comment)

They weren’t bothered by William Jefferson Criminal’s lack of decorum? Trump gets jobs, Bill got bjs 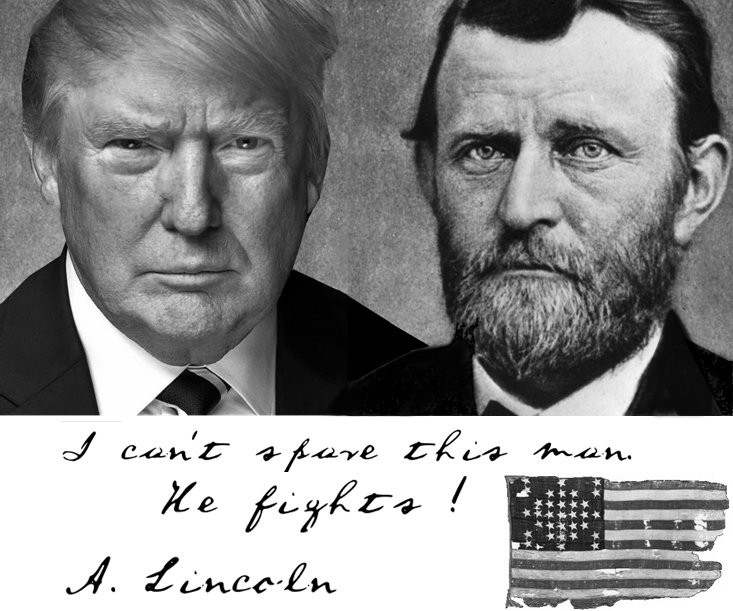 YES! This author gets it. This should be required reading until everyone on FR understands it and fully understands that we are at war with the Progressives (of both parties).

I don’t find anything “dignified,” “collegial” or “proper” about Barack Obama’s lying about what went down on the streets of Ferguson in order to ramp up racial hatreds because racial hatreds serve the Democratic Party.

True statement and the corrupt, crooked media went right along with it.

Thanks for posting it ...

When trying to get their way, the left likes to use the line “appeal to your better nature” approach to conservatives.

Awesome! The Left has been like an abuser who bullies his victim repeatedly but says keep quiet or things will get worse. Finally, finally, after being tormented for decades, we have a President who is fighting back against the bully abuser instead of cowering each and every time.

Most of the media is really the Democratic Party at work. They are desperately trying to justify Hillary’s loss. They worry about the next election. For years, people within the Republican Party yearned for someone to fight back. Trump has found a way with rallies and tweets. He speaks the right-wing language. He promises less government, less taxes. He promises more security and military support.
Half of the country supports Trump, while the other half
dislikes him or is not informed. Those who have made a career out of politics, fear they will lose their power.
Hatred and anger is a political tool utilized for attention.
Those dependent on Government will be threatened.

Had the crooked media vetted Barrack Hussein 0bama, that arrogant pos would have never made it past the primaries, yet alone get elected. They were only interested in making that fraud the first “black” president.

He didn’t even mention Obama’s giving us the middle finger - artfully - & calling us Tea-baggers. Yea...so much for dignified & collegial.

The Democrat Charge: President Trump’s Tweets are below the dignity of the office.

PAST STANDARDS OF DIGNITY SET BY OUR ELECTED LEADERS

Ted Kennedy, drunkenly drovew his car into a river and abandoned a young, helpless woman passenger to drown.

Bill Clinton had perverted sex in the White House with a young girl barely of legal age.

Barack Obama ran illegal guns to Mexican Drug Lords, gave billions to our enemies, brought musim terrorists into the government
and broke the law too many times to count.

John Edwards had an adulterous affair with a journalist and was subsequently indicted for using campaign money to support and hide his mistress.

Anthony Weiner was driven from office and convicted on federal charges of transferring obscene material to a minor.

AND DEMOCRATS INSIST THAT PRESIDENT TRUMP’S TWEETS ARE BENEATH THE DIGNITY OF THE OFFICE?