A man previously known to French authorities for radicalism has rammed his car into a bus filled with police on the iconic Champs-Élysées in the heart of Paris this afternoon.

This is yet another "Known Wolf" terror attack. Virtually all terror attacks are committed by someone already known to authorities:

Image of the car used by an attacker who tried to ram into a police vehicle at the #ChampsElysees #Paris pic.twitter.com/u6D0M923IO— 365StudioNews (@365StudioNews) June 19, 2017

On top of the arc de triomphe street closed at champs elysees at least 15 cop cars from what I can tell #paris #ChampsElysees pic.twitter.com/SHkI2PEOly— cindy (@ls1cindy) June 19, 2017

Reports claim that the car exploded upon impact and that the suspect had an AK-47 but was reportedly killed at the scene:

The French interior minister has said the act appears to be deliberate:

French reports indicate that the still-unnamed suspect was on on the "fiche-S" terror list for radicalism and previously known to authorities:

Less than two weeks ago, French police were attacked outside Notre Dame Cathedral by a hammer-wielding man who was upset about Syria:

And, as I reported here at PJ Media back in March, French police shot another "Known Wolf" attacker at the Orly Airport in Paris:

Obviously, the French authorities would rather leave their people exposed to random terrorist attacks, than take these animals into custody and be charged with islamophobia.

No name. No nationality. When it’s not a muzzy they tell us within minutes, and start the whining about “hate.”

Hint to France: if you have someone on a terror list you have two options: deport them, or shoot them and pike their head on the palace gates. Either or.

You had a chance at a second Joan D'Arc but you wanted the broad and easy road.

The POS terrorist is dead, at least. Good riddance. He was “known to police”.... aka known jihadist and they just had to wait for him to strike!

Are you gonna do anything about this, President Fagcron?

I’m not holding my breath.

A: So the jihadis can explode in the shade.

I like your suggestions, but need to include bacon or pig fat somewhere...

This is one of the links you posted. I read the entire article. The French screw-ups are mind-blowing. Folks who translate it should grab the blood pressure meds.

Takeway: Since the French are FREAKING suicidal, we need a bigger travel ban. 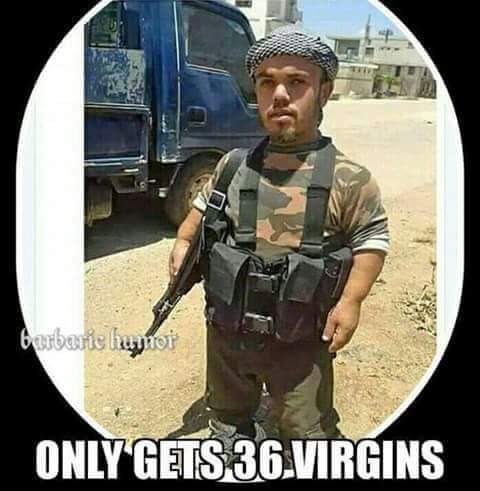