RUSH: There is hysteria across this country, and across the pond in Europe. There’s just hysteria everywhere you look, and a lot of it is rooted in a panicked, hysterical need on the left to protect the legacy of Barack Hussein Obama. Pretty much everything of the Obama administration is being pared away — or trying to. The severe efforts. Obamacare, the first stage of the repeal has taken place, and the panic that has ensued over this… Are you aware — and I tried to mention this. I warned people over the weekend that this was coming. They looked at me like I’m nuts.

I said, “Are you aware — and, if you’re not, you had better be prepared to hear starting very soon — that the Republican health care bill that passed the House of Representatives now treats the cause of rape as a preexisting condition in order to deny rape victims and the victims of sexual abuse health insurance?” When I tell you that, does that make any sense to you? I mentioned this to the people at dinner one night this weekend, and they looked at me like, “What are you talking about?” And I didn’t blame ’em. It sounds like… I know it sounds nonsensible.

You have a bunch of hysterical leftists, hysterical leftist women that are running around… This story has now gone viral. There are versions of it in the Washington Post. It started in, I think, New York Magazine with a woman writing that the Republicans want to deny everybody with preexisting conditions any insurance. That’s lie number one. And now they’re trying to deny rape victims and sexual abuse victims health insurance on the basis… None of this is true! It is literally… I mean, it’s worse than made up. It’s worse than lies.

This is insane hysteria. It’s literally made up for the Drive-By Media to pick this up and run with it. And literally what they’re claiming is that the cause of rape — whatever that is, the circumstances that led to rape and the rape itself — then equal a preexisting condition. And the cause could be post-traumatic stress disorder, any number of things, and these evil Republicans want to deny the victims of rape and sexual abuse health insurance on the basis that it’s a preexisting condition.

Never mind the fact that the Republicans are bending over backwards to include preexisting conditions in virtually everything. But as is often the case, here’s a premise that’s put out. It’s kind of like the global warming premise was put out there. And what do we do? We validate the premise by accepting it and trying to reject it intellectually and logically. There are already pieces saying, “This is not right. This is wrong,” with intellectual reasons why.

So it just… Listen to it a second time. Does it make any sense to you? How could anybody even think this way? What do you have to be doing after the Republicans passed their health care bill to start thinking, “Well, you know, that bill has rape victims listed as victims of preexisting conditions, and therefore the Republicans want to deny them health care!” How…? How do you even think this?

RUSH: Let me show you some of this hysteria. You ready? “Bette Midler…” Song stylist extraordinaire, Bette Midler: “GOP Are Homegrown Assads, Gassing Their Own with the Health Care Bill.” I’m not making this up. When the House passed Obamacare replacement bill — the American Health Care Act, whatever it is — last Thursday, Bette Midler tweeted that the Republican Party was “gassing their own people” by repealing Obamacare. So the homegrown Assads in the Freedom Caucus want employers to not have to offer health care to employees, are like gassing their own people. 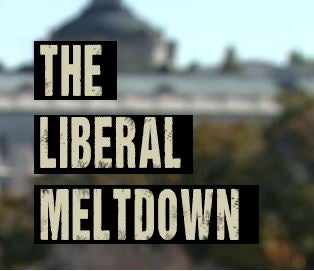 Here’s another headline: “Health Act Repeal Could Threaten U.S. Job Engine.” (repeats) “Health Act Repeal Could Threaten U.S. Job Engine”? You know, have you seen the news that the Republicans have committed suicide with this health care repeal? Well, not so fast on that. Let me present an alternative today as the program unfolds. But I genuinely want to deal with something here. This hysteria over the Republican health care bill is grotesque, and it is nothing more than the media’s desperate attempt to keep Obama’s key domestic achievement alive, at all costs.

If you didn’t know any better, you would think Obamacare the most beloved piece of federal legislation ever, that it had a 100% approval rating, that everybody was happy with it, that nobody was suffering from it, and the Republicans have come along and want people to die. The Republicans want to kill people. The Republicans want to deny rape victims access to insurance because rape and the cause of it equals a preexisting condition. The truth about Obamacare is it’s killing jobs; it’s killing the U.S. economy.

And as long as Obamacare is in force, I don’t see how our economy can ever grow beyond 3%, with the federal government owning one-sixth of the U.S. economy and making a mess of it, with premiums skyrocketing beyond any hope of people being able to pay for it. And, of course, all of this is a direct route to single payer. Now you have Obama’s big supporters like Warren Buffett and Bill Gates and Charlie Munger all out now supporting single payer after the Republican health care passes the House.

You notice it’s these very wealthy people out there pushing for single payer? They know they will never have to enroll in that eventuality, with the government running health care. They’ll never have to be governed by it. So it’s easy to gain points and political favor by talking socialism and government taking care of everybody when they’re never gonna have to suffer the consequences. It’s typical of what they do.

RUSH: So the Republicans are slowly but surely wiping the Obama presidency off the map, and if you don’t necessarily agree with they’re being successful with that, you have to admit that there is an effort underway to do just that. And if you don’t find it within the halls of Capitol Hill and the Congress in the House and the Senate, you do find it at the White House. There is a serious effort to wipe the Obama presidency off the map, and the big signature claim to Obama’s presidency is Obamacare, and the first step has been taken.

“Bette Midler tweeted that the Republican Party was ‘gassing their own people’ by repealing Obamacare.”

She uses a mass murderer’s logic. Demonize, and then you may righteously kill the demons. Indeed, you must.

The One is having the Greatest Meltdown — He keeps having to mention his precious legacy every time he opens his mouth.

As far as I can tell, his legacy is a huge racial divide that has re-opened during the past 7 years.

Obama doesn’t need to worry. The whole nation knows what his legacy is.

Trump is now president for that very reason.

Who would want to preserve a “legacy” which was Grubered into existence.

8 posted on 05/08/2017 4:52:35 PM PDT by browniexyz
[ Post Reply | Private Reply | To 4 | View Replies]
To: browniexyz
I was a military dependent and I rarely saw the racial divide we have now. In the 50's and 60's I can assure you that there were great bridges established between the races in our schools and social life.

While on active duty through the 70's and 80's the bridges didn't get any wider but they remained solid. Later, while working in industry and teaching until retirement, I can still say the same.

I started running across the whiny victim syndrome at the very end and that was a factor in deciding to retire.

However, I can categorically state that in the past 8 years the bridges have been destroyed and I believe that has been on purpose. It was done for the political gain of the dimrats.