No charges to be filed against Mr. AR15. 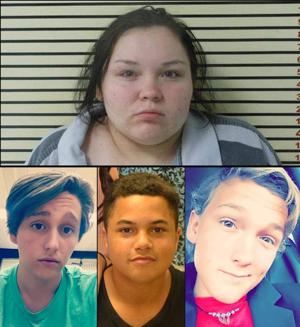 The bottom three photos are from at least 4 years ago and are designed to elicit sympathy.

There are current photos of them showing them as more mature and definitely more threatening.

They all be daid. ‘cept the hog.

A thread was posted here yesterday about the grandfather of one of the miscreants. Gramps was all bent out shape because the homeowner’s son used an AR-15. Called it over kill.

I’d like find out exactly how many shots were fired. Was it three? Or was it closer to thirty?

I’ll bet it was closer to three.

7 posted on 04/03/2017 12:47:00 PM PDT by gr8eman (People too dumb to understand what the word "country" means will never have one!)
[ Post Reply | Private Reply | To 1 | View Replies]
To: ImJustAnotherOkie
Jacob Redfearn's grandfather, Mr. Leroy Schumacher, is not going to be happy about this.

Mr. Schumacher believes that the homeowner's son should have undertaken a thorough investigation, and conducted a trial, complete with judge, jury, and defense team, before he fired his AR-15 in self defense.

If you listen to the 911 call, the fella said he shot twice, and one ran out the back door (the door they broke in through).
Apparently he died in the driveway, so one of the two shots
must have hit two of the perpetrators.

He is real calm on the call, but after shooting he went to a back bedroom and locked the door in case they came after him.

13 posted on 04/03/2017 12:54:26 PM PDT by Verbosus (/* No Comment */)
[ Post Reply | Private Reply | To 6 | View Replies]
To: Steely Tom
Mr. Schumacher believes that the homeowner's son should have undertaken a thorough investigation, and conducted a trial, complete with judge, jury, and defense team, before he fired his AR-15 in self defense.

Kinda...he probably insists that the victim asked for IDs and if they didn't have it, settle for arm wrestling in order to judge intent.

Bet your ass that old man Schumacher would be shooting if 3 thugs broke into his house while he was there.

Kind of shoots the over kill complaint down, doesn’t it?

such a tragedy for every one involved!

yep... below someone posted more current pics of the THUGS!!!