Where does this end?

The progressives’ rejection of the presidential election, the obstruction and social disruption – what is its purpose?

In coordinated nationwide demonstrations, in random outbreaks of campus violence, in shrill denunciations and boycotts, a secession has taken place. A non-geographic civil war has seemingly been declared.

In rejecting the outcome of an election in a republic, one rejects the premise of that republic, and the compact of citizenship. It is a nullification of the social contract. If, in fact, the president selected by a constitutional process is not your president, then it is not your Constitution. You have rejected it. You have stepped outside the group which declared itself with the words, “We the People.”

It is an act of rebellion and revolution.

And to throw fuel on that fire, to ratchet up the spending and the rhetoric, to pump the marketplace of ideas with ever more invective and anger, is to mash down on the accelerator of a car headed toward a brick wall. Enraging people, abandoning civility and comity, is how you build barricades, not bridges. This is not the spirit of the American Revolution, it is the spirit of the French Revolution.

And the master funders of the progressive movement are plowing millions into it. The leaders of the Democratic Party, in government and out, are claiming and shouting outrageous and incendiary things. The shrill zealots of progressive society are shaming and blacklisting and whipping the timid into conformity.

And you wonder where it goes.

What is the end?

Where do they want this to take this country?

What is the finish line these people seek to cross?

Is all of this to whip up passion for a congressional election that is still two years away, or a presidential election two years beyond that? Is it to paralyze and derail the function of the American government, to destabilize our nation, until the candidate of the mobs can be installed?

Do they want commissars to be appointed? Do they want an overturn of the presidency? Is it a coup they seek? Do they want to foment a social disorder that crumbles the organizational infrastructure of the American nation and people?

Or is there some form of release and relief in shouting their hatred for a president and his supporters? Is there an orgasmic thrill to be had in declaring half of your fellow citizens your moral and intellectual inferiors?

Or is it extortion? Are they hoping to buy something with their unrest, to squeeze from the government some concessions and autonomies?

Will there be a new flag, and a new capital – a new currency, and who will be on it?

The Democratic Party has established itself as a coalition of the disaffected. Is it now seeking to disaffect the entire nation, to turn it against its structures and institutions -- even its electoral voice? Americans have always been taught to support the constitutional government that protects their liberties, now they are being taught to actively hate it.

Mayors have used taxpayer resources to organize political protests. Weekly demonstrations have been decreed by sitting municipal officials. The fuehrers of the arts community have declared they are undertaking a war against fascism, and performers and business leaders are threatened with blackballing if they acknowledge a new president.

The loudest voices in our society are profanely denouncing what two hundred years of American experience have defined as the basic obligation of the citizenry – to live by the Constitution. If social disruption is to occur in the wake of a presidential election, then it was not a peaceful transfer of power. If one half of the electorate is to take its toys and go home, to throw a rage of destruction over its electoral failure, then their relationship with their fellow citizens is fundamentally abusive and hostile. If the progressives can’t have control of the levers of power, then no one can.

That is bullying, at best. And civil war, at worst.

And they keep pushing down on the accelerator.

So perhaps they should be honest enough to state their objective.

What is the end game?

What are they trying to achieve?

Is this secession? Is it revolution?

Or is it just a tantrum?

Paid protestors. Instigated by George Soros. The media not reporting the truth.

“What is the finish line these people seek to cross?”

A one-party system is what they seek. The elimination of conservatives as a political voice.

Remember ABC news commentators immediately after Trump’s inauguration speech, saying his rhetoric reminds them of fascism in the 30’s. This is why no one from the administration should go to that despicable and bullying White House Correspondents dinner.

who cares if the “accept” the election...

so far they are rioting in libtard strongholds...
hope they destroy them
aside from the sedition, property destruction and violence funded by soros, these people are useless idiots who can accomplish nothing..
the soros crew can be dealt with by enforcing the law and cutting off fed funds and indicting soros and locking his money...

we should have learned from the 60’s that failure to enforce the law will lead to more violence...
nip it in the bud
peoblem is that school administrators and mayors of libtard minicipalities and universities support the stupidity...

And what if Trump supporters were acting like this if Hillary would have one? I tend to think violently putting us down. If after the Trump Administration is not given some breathing room to bring back and re do the harm that Barky, Clinton have done, then I think your going to see people take to the streets, and they won't be the George Soros paid people either, nor will you see any of them with their printed up in mass signs, what you will be seeing are the American People getting ready to let the libtards in government all over America to stand down and get out of the way...

If you listen to people in the groceries stores, service stations, other places, people are getting fed up, it won't take much to see the RATS and George Soros and the MINI RATS scatter and hide...

This is what was meant by "Fundamentally transforming America." They thought they won the revolution by republican means. When its consummation was denied them by the same republican means, they have gone militant revolutionary.

Which is as all good bolsheviks do. And until Trump came along, the GOP was willingly playing the role of Mensheviks.

The only Il Duce or Fuhrer in the last decade was Obama. He had the head tilt down pat and I hear he ate barbequed babies just like General Idi Amni Da-Da Emporer for Life..... :0) Ready to rule from day one he was.

Look, if you truly do believe the President and his administration is fascist, racist, and so on, then you should wage war.

This issue is not “accepting the outcome” or “getting along” or being “a unified nation,” the issue is the merits of one’s claims about the merits of the regime.

Lefties are neither immortal nor invulnerable.

What is the end game?

What are they trying to achieve?

The complete overthrow of capitalism.

They will not stop until it is accomplished.

"The fire is in the minds of men, not on the roofs of houses" 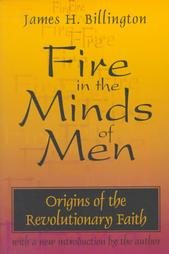 Ever notice how prophetable it is to rebuild the village after it gets burned down?

They are going to squel even more...

The key maxim that had best be remembered is this:

As on the playground, so too in the world.

One only has to look at California to see what these people seek.