NEW DELHI: A Chinese Navy nuclear-powered attack submarine which docked at the Karachi harbour in May took aboard Pakistani naval officers and sailors to give them a first-hand glimpse of how the submarine works. This was not a simple case of access being given to a close military ally.

On Friday, NDTV broadcast images of an advanced 'Shang' class nuclear submarine which was placed, through a satellite image, at Karachi last year. The images were first spotted by a satellite imagery expert (@rajfortyseven) who posts on Twitter.

Displacing 7,000 tonnes when it operates underwater, and armed with six torpedo tubes, the Shang class submarine is part of the latest generation of nuclear attack submarines designed and commissioned by China. The submarine also has the ability to fire cruise missiles - including the Babur missile that Pakistan yesterday claimed to test-fire off its coast, a claim that has been disregarded by the Indian Navy.

Pakistan's acquisition of a 'Shang' class submarine will have an impact on the naval balance in the Indian Ocean, which is currently skewed heavily in favour of the Indian Navy.

India's navy is significantly larger and more capable than its regional rival.

Unlike conventional diesel electric submarines that Pakistan has been operating for decades, a nuclear attack submarine has practically unlimited endurance. Its nuclear reactor is unlikely to require refueling during the life of the submarine, which means the 'Shang' can theoretically operate indefinitely under water. Even though realistically, it will be limited by the amount of food and supplies it can carry for its crew.

The mechanical reliability of key systems also limits the submarine.

The Pakistani acquisition of a 'Shang' class submarine is meant to counter the Indian Navy's 'Akula-2' class nuclear attack submarines which New Delhi has been leasing from Russia.

Considered among the most powerful submarines of its class, the Akula-2 - named INS Chakra - has been leased for 10 years and will be returned to Russia within four years, by which time the Navy will have acquired a second submarine of the same class. The terms were recently worked out between the two countries.

Now for the first time, details are emerging on how the Indian Navy has been able to track the movement of Chinese submarines, which first started operating in the Indian Ocean in 2013, a clear signal of how Beijing intends to expand its strategic reach to include areas of the Indian Ocean which New Delhi has typically considered its own backyard. 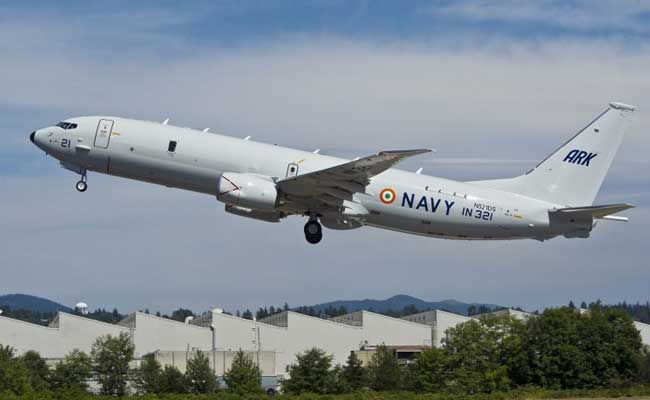 The P8-I is a US-made maritime surveillance aircraft

The Chinese 'Shang' class submarine, which docked in Karachi, entered the Indian Ocean through the Malacca straits off Singapore between April 19 and 20. Picked up almost immediately by the Indian Navy's US-made Boeing P8-I maritime surveillance aircraft, the submarine - accompanied by a large 10,000 ton fleet support and replenishment tanker - was constantly tracked on its way to Karachi.

The P8-Is dropped sonobuoys across the projected route of the submarine. Sonobuoys - small listening devices that transmit the sound of submarines to reconnaissance aircraft operating overhead - are key to detecting submarines.

Interspersed with the 'passive' sonobuoys deployed by the P8-Is, were 'active' sonobuoys which ping the ocean with sound waves reflecting off the submarine surface.

Using a combination of both sensors, the Navy's P8-Is were able to force the Chinese submarine into making evasive maneuvers.

The exact location of the submarine was also passed on to India's own submarines, which were also monitoring the movement of the 'Shang'.

The 'Shang' entered the Karachi harbour on May 19, its exact location constantly plotted by the Indian Navy's assets, which have determined that the sound radiated by the Shang class is higher than the considerably quieter new generation American or Russian submarines, which are tougher to detect.

The 'Shang' and its support ship spent seven days in Karachi, leaving on May 26. It was during this period that Pakistani Navy sailors and officers were allowed access to one of the Chinese Navy's most sensitive assets.

It's still unclear if the 'Shang' returned to Karachi to disembark the Pakistani Naval personnel or whether they were transferred to another vessel as the submarine proceeded south along the Indian peninsula before setting course for the Malacca straits.

On June 14, the 'Shang' submarine exited the Indian Ocean region.

Senior Navy officers have pointed out that the deployment of Chinese Navy submarines in the Indian Ocean coincides with active efforts to establish a ring of ports to strategically encircle India.

On Sunday, the Maldives leased China an island for 50 years at just 3 million dollars.

Earlier, China had also invested heavily in the Ihaven atoll in the Maldives chain, which lies just south of the southernmost Indian island in the Arabian Sea, the Minicoy Islands.

Located on a key East-West shipping route, Ihaven could give the Chinese the possibility of berthing naval ships and submarines very close to the Indian mainland.

As significantly, China has secured an 80% share of the Hambantota deep sea port in Sri Lanka as well as land for a new industrial zone in the area. According to the plan, land in this area will be ceded to Beijing for the next 99 years in exchange for $1.1 billion towards debt relief.

Pakistan and China, meanwhile, continue to work closely on developing the strategically located Gwadar port, central to the $46 billion China-Pacific Economic Corridor (CPEC) that is under development. China also continues to expand its naval base in Djibouti situated in the Horn of Africa.

This trope never gets old!

Pakistan is and always has been itching for a war against India. And India has then so overwhelmingly outnumbered, out gunned and has several times the nukes. Plus India has its population spread out, where Pakistan has small densely populated areas. It is no contest.

Sure the Paki’s can buy the Chinese subs, but in an hour they will be hungry again...

The world is falling over itself to give nukes to every jihadist we can find. Just like Obama phones. Here, take one. Take six. Tell your friends.

Excerpt: Since 2002, U.S. aid to Pakistan (both economic-related assistance and security-related assistance) has averaged roughly $2 billion per year. That figure is impressive; by way of context, it bears noting that over the last two decades, Pakistan’s annual defense budget has averaged around $5 billion.

Could become very interesting if a Pak submarine has an accident and 90 Chinese sailors die ...