The sound of silence — why Germany lost its subs bid (Australia)
The Australian ^ | May 30, 2016 | Cameron Stewart

It was the smallest of sounds, too soft for human ears but deemed loud enough to potentially doom an Australian submarine.

Two weeks ago, behind closed doors in a shipyard in the German port of Kiel, the secrets behind Australia’s $150 billion submarine decision were finally revealed. It was a moment that left the Germans stunned. They were told for the first time that they had lost the bid because their proposed Aust­ralian submarine had an “un­acceptable’’ level of “radiated noise’’.

In the world of submarines, noise equals potential detection and death, but when the Germans pressed the Australian officials in the room that day to explain ­further they were rebuffed. That information was classified, the Australians told them.

In a short and testy exchange, the truth became clear — France had won the largest defence ­contract in the nation’s history ­because it had best achieved the sound of silence. As a spying platform against China, and in the case of war, the proposed French ­submarine was seen to be more stealthy than those proposed by Germany or Japan.

But this is a $150bn judgment call — the construction phase is worth $50bn, with the sustainability of the submarines running to an extra $100bn over the life of the vessels — that the Germans fiercely ­contest, at least in private. It is also one that threatens to undermine ­relations with Berlin in the same way as the rejection of Japan’s bid has harmed Canberra’s ties with Tokyo.

The confidential debriefing for the failed German submarine bid took place inauspiciously on Friday the 13th this month, inside the historic Kiel shipyards.

An artist’s impression of the German Type 216 submarine that TKMS hoped to build for the Royal Australian Navy.

I’m curious if there was another reason for their rejection, but I don’t wish to pay for a subscription today.
France is raising a toast to celebrate their HUGE $150 Bilion Dollar contract. Australia now has both Japan and Germany mad at them. Both can be formidable as enemies when they decide to.
America wasn’t even a contender in the running. 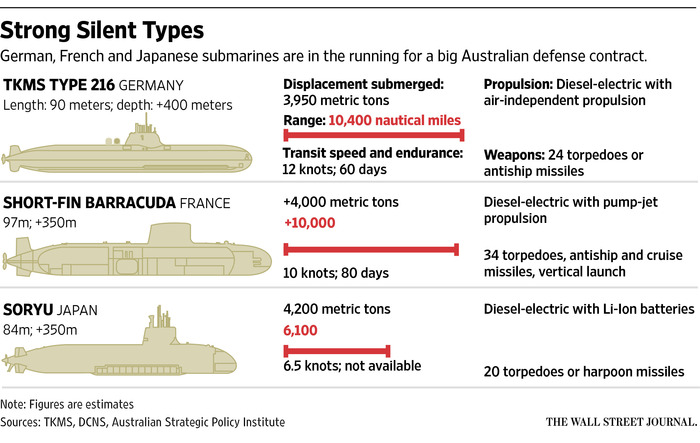 I am pleased the Aussies have recognized the true threat that exists from China. These boats will counter any Chinese visions of dominating the Aussies for many years.

Be it said that modern propulsion boats now being turned out by the Europeans are stealthier than any of the outdated US nuc fleet now in the water. Nucs have great staying power and range, but no longer can match tactically the newest of non-nuc designs, and are better value when the mission is tailored to their strengths.

Are the speeds really that slow?

As perfidious as the French government has been over the last 50 years, would you trust a French company to build a critical defense component?

They got das boot?

Bingo. One would think a successful track record would matter in these expensive and critical defense procurements.

Smart move by the Australians since US shipyards don't build diesel subs. The last time the U.S. Navy commissioned a diesel sub was 1959...

The real reason could literally have been anything. But the Aussies deliberately added insult to injury by saying it was too noisy without showing any data. That’s a real slap in the face to Germany’s submarine engineering.

I wonder if it had to do with Germany’s pro-Dhimmi positions. When one powerful country starts to support voluntary Muslim invasion and rape of its women, other powerful countries find ways of pushing back.

I would think France’s Sub having the capability for vertical launched cruise missiles might have been factor in selection.

Submarine silencing technology was some of the stuff Bill Clinton traded off to China and I wouldn’t really trust buying high price tagged military equipment from countries undergoing Islamification.

I wonder why there where no U.S bids? Probably because we’re not trusted either.

Did the French submarine achieve its silence by ejecting the prop?

Seems more likely to me that French hookers were involved than the French building a submarine (or anything else) better than the Germans.

Sure they are silent but when they have to recharge the batteries they are very vulnerable. SSN and SSBN have battery back up where they can go silent just enough to get away from you and restart the power when safe.
With diesel they know soon enough you must come to periscope depth and recharge the batteries.