A huge wildfire in Fort McMurray, Alta., destroyed an entire neighbourhood and burned homes and businesses in several others Tuesday, and continues to rage out of control.

By late afternoon, the entire city of 60,000 had been ordered evacuated. Residents by the thousands fled the fire and for hours caused gridlock on Highway 63, even overwhelming oilsands work camps, where beds and meals were offered. Police were patrolling the highway with cans of gas, after fuel supplies ran out in Fort McMurray, Wandering River and Grasslands.

Sixty thousand residents of Fort McMurray have been ordered to evacuate the metropolitan area, due to forest fires surrounding the area. There is only one main highway into town, from the South, and a smaller highway running North, to various oil sands work camps. As of yesterday afternoon, 17,000 had vacated North to escape the flames and 35,000 had created a massive traffic jam heading South, many heading towards Edmonton. 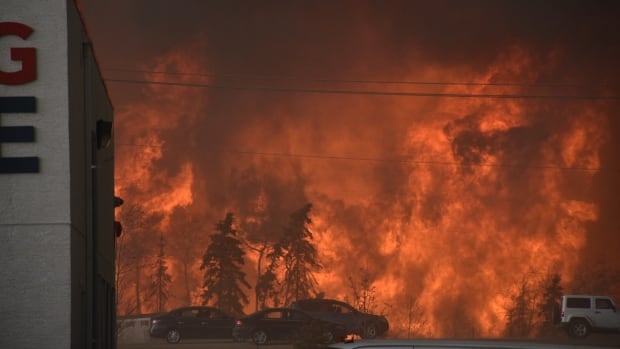 It has been a warm, dry winter in Alberta, due to el Ninõ and temperatures in Fort McMurray have been in the low 30s (86-92°F) for several days. Surrounded by dry, boreal forest, it is a tinderbox. Two years ago during the boom, a basic, one bedroom condo could not be found for less than $400,000 in Fort McMurray, but due the oil crash, thousands have been laid off and tens of billions of investment in Alberta has been cancelled, due to low oil prices, a majority socialist Provincial government and a 'Liberal' (actually, socialist) majority government in Ottawa. Now, that condo might sell for $200K.

The only 'good news' for the residents of Fort McMurray, is that many oil sands work camps are empty, and can be used to shelter those escaping North!

So far, thank God, there are no reported casualties from the fire or evacuation. Any FReepers who choose to pray for these forest fire evacuees, I sure their prayers would be coveted by the residents of Fort McMurray.

I believe that may be the “tar sands” region of Canada.

I’ll guess you can get one heck of a wildfire when the SOIL starts burning, too!

Yes a large tar sands operations. I have a friend who was transferred to that area to work on the Shell operation.
Bad news since it’s a remote area.

4 posted on 05/04/2016 9:39:43 AM PDT by Lockbox
[ Post Reply | Private Reply | To 2 | View Replies]
To: zeestephen
From what I understand of the 'oil sands'/'tar sands' mining process, the 'oil sands' run almost like 'seams' in the ground, as coal would. There is little, if any, that does not have 'overburden' atop the seam, so there is little chance of the ground catching fire. If something like that happened, I imagine it might be akin to an underground 'peat bog' fire, burning and smouldering for years unless it was dug up and extimguished.

Here is a diagram from the Imperial Oil (69.6% owned by ExxonMobil) website, detailing the process used at the 'Kearl' site:

Note the shovel digging the oil sand located under the overburden. The 'overburden' is removed and the 'oil sands' are mined and processed.

Historically, the Natives in the area, would use oil sands on the surface or seeping out of the banks of the Athabaska River, to waterproof their canoes. The 'easy stuff' is all gone.

‘Uncle Charley’ (William Demarest) was more of a ‘wildfire’ than ‘Steve Douglas’, as I recall. ;-)

I am wondering what the nature of the soil will be after an event like this? Sand + heat = glass, right?

My daughter and her family along with 60,000 others had to go to Edmonton but everyone is OK thank God.

I read that sand must be heated to 3,200°F to form glass and wood eventually burns at nor more than 1,600°F. Of course wood burns at lower temperatures, but without an accelerant, 1,600°F is about it, from what I’ve read. If however, one or more of the upgrader plants, along with associated chemicals and products catches, it could be a whole other ballgame. They are however, located away from the city itself and because of the billions invested, trees have been cleared FAR away from the plants for safety.

FWIW, in the 1950s, the Canadian and Alberta governments examined using underground nuclear explosions to boil the bitumen, reducing the viscosity of the oil so that it could be recovered using existing oilfield technology. The plan, ‘Project Oilsands’, aka ‘Project Cauldron’ involved the explosion of 100 nuclear bombs underground. Eventually, due to fears of Soviet espionage and government change towards non-proliferation, the plan was scrapped. THEN, you might have seen soil changed to glass!

where in hell is this place??

I hadn't realized that the most valuable “sand” was still well below the surface.

Years ago, I recall reading a science article that explained that almost all the petroleum in the world is slowly but steadily working its way up to the Earth's surface, where it then evaporates or is consumed by microorganisms.

The “tar pits” in Los Angeles, as I recall, were the final step before the petroleum was broken down and recycled into the atmosphere, oceans, and surrounding land.

Very interesting! Thanks for the input. I wondered if it would get hot enough.

13 posted on 05/04/2016 1:40:52 PM PDT by stayathomemom (Beware of kittens modifying your posts.)
[ Post Reply | Private Reply | To 10 | View Replies]
To: Phlap
Glad they got out!
Here is an update on areas of damage in the city as of 4:30PM from the Regional Municipality of Wood Bufalo (the corporate name of the 'Fort McMurray' area):

Just checked an update from the Edmonton Journal as of 4:30 PM (MDT).
- Two people were killed in a vehicle accident on Hwy 881, may be related to evacuation.
- Premier Notley has confirmed 1,600 structures in the city have been burned.
- Notley may soon be requesting fire fighting assistance from other Provinces and Northern States.
- 88,000 people have evacuated, 10K to the work camps and the rest to the South.
- Fort McMurray International Airport has been closed.
- The fire has cut Highway 63 at the Hwy 69 intersection, so no supplies or firefighters arriving by road and no one getting South by road.
- RCAF is using C-130Js and CH146 Griffon helicopters to ferry food and supplies to the work camps North of the city, which were running short of food and water. They are to be temporarily based at CFB Cold Lake, AB. A C-17 Globemaster is on standby at CFB Trenton to move firefighters and equipment if/when called upon. 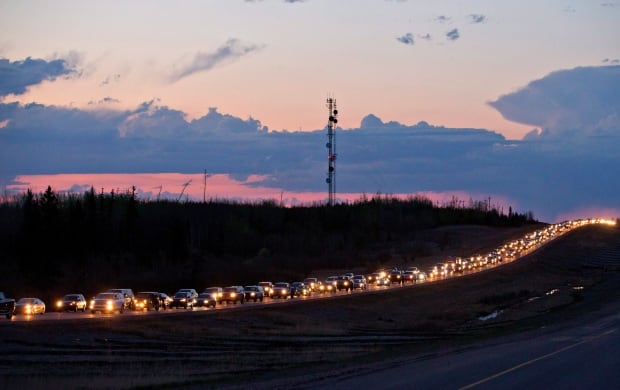 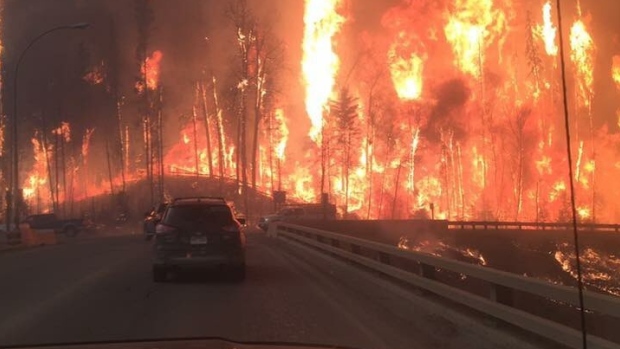 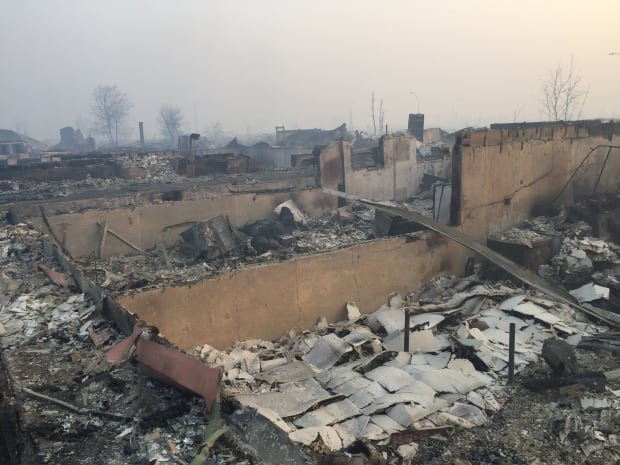 I saw this (report, vids) on the evening news, tonight, after hearing about it on the radio, and thought I should watch. Un-freaking believable scenes of people driving out through the fire. Someone mentioned “hell” — this really is. My Dad had some experience with forest fires — They need a lot more than 200 firefighters on this one (what I heard in the NBC report.)

15 posted on 05/04/2016 7:21:02 PM PDT by Paul R.
[ Post Reply | Private Reply | To 14 | View Replies]
To: Paul R.
In 1907, Rudyard Kipling toured Canada via the CPR. At a stop in Medicine Hat, Alberta, he wrote a well known line (at least to Albertans), "This part of the country seems to have all hell for a basement, and the only trap door appears to be in Medicine Hat.” ('The Hat' calls itself 'The Gas City' and at the time of Kipling's visit, many farmers 'drilled' wells for 'surface' natural gas. 'Surface' gas, is gas from the surface down six feet was retained by the land owner, whereas everything deeper was owned by the 'mineral rights holder'.)

Your comment about someone calling it 'hell', brought this comment to mind, and this song by 'Big Sugar' in 2001. Alberta IS, after all, all about energy, and petroleum in particular, be it Medicine Hat or Fort McMurray.

The Premier asked the BC Premier yesterday for BC firefighters to help, but she was turned down. There are few BC fires right now but, like AB, it was a warm, dry winter, so BC is due for a lot of forest fires. AB was able to score a water bomber from BC, I believe.

The Premier of Newfoundland has pledged assistance for AB. That may sound odd but for decades, Fort McMurray has been known in Canada as the 'second largest Newfoundland city' because there were more 'Newfs' in Fort McMurray than from anywhere else! When the fisheries died, the 'Newfs' moved to McMurray.

I suspect that Notley has already spoken with a number of Premiers and US Governors about bringing in additional firefighters from their jurisdictions. That sort of thing often happens with Canadian firefighters helping US forest fires and vice versa.

Apparently, the City of Edmonton Fire Department sent 4 trucks, along with a number of firemen, a tanker truck full of diesel and two city buses full of supplies. Lucky for the firemen, they also sent a number of Edmonton Police cruisers. As Hwy 63 is closed NB, traffic was heading South in all available lanes. The EPS cruisers cleared a path for the rest of the convoy heading North!

The last I heard, was that it was even more out of control, though they are still able to keep the fire out of downtown. Overnight, it is supposed to cool down, and they may get showers, but there is a chance of lightning, so that could make it better, or worse!

I think this is how they make Flubber.

Tghis is a horrible incident for Alberta. MNoptice how poofter PM Trudeau is dragging his feet on helping Alberta.....the feds are screwing Alberta again, because it has money and resources. If this had happened in Quebec the federal response would have been immediate and enormous.

The problems with Canadian Confedseration are now hanging out , the dirty underwear of Canada is plain for all to see.

The response to this horrid fire underscores how liberal fascists leave no crisi uneploited.

Make no mistake. Trudeau is indeed a liberal fascist. He will shrug like his father and go on hugging Muslims in Westminster B.C., after he bends over in the Mosque in submission to Allah,the only thing he is remotely good at.But he sure looks good! ( Yech!)

Trudeau the man child is a short timer.