Mohammad Bin Zayed, US president discuss developments in region and cooperation between the two countries

His Highness Shaikh Mohammad Bin Zayed Al Nahyan, Crown Prince of Abu Dhabi and Deputy Supreme Commander of the UAE Armed Forces, and US President Barack Obama, discussed in a phone call friendship and cooperation between the two countries, ways to enhance them, and issues of mutual interest, as well as the latest developments in the region.

During the telephone call, they also confirmed the distinguished relations between the two countries in all fields. They reviewed a number of matters of joint interest, especially the latest developments in the Syrian crisis, the situation in Yemen, and combating extremism and terrorism in the region. The two sides also expressed their joint desire to support pillars of peace and stability in the region and the importance of putting an end to the crises that cause threats and danger to the region’s countries and peoples.

The phone call came in the framework of the two friendly countries’ communications and consultations regarding developing bilateral relations and the latest developments in the region.

But, Obie is not moslem. What could they find in common?

The title should read:

Muhammad to discuss with Muhammad...

Given the titles, no wonder- us prez obama, bowed and scraped to the house of saud. At least, the presentation of greeting was completely homosexual. Right, nick?

When indicting the US media, I think that says it all.

6 posted on 10/18/2015 1:09:15 AM PDT by Cletus.D.Yokel (BREAKING: Boy Scouts of America Changes Corporate Identity to "Scouting for Boys in America")
[ Post Reply | Private Reply | To 1 | View Replies]
To: nickcarraway
Monday the "Clock Boy" Muhammed is scheduled to meet "Dear Leader". Just a few days ago he had an audience with the "Butcher of Sudan" 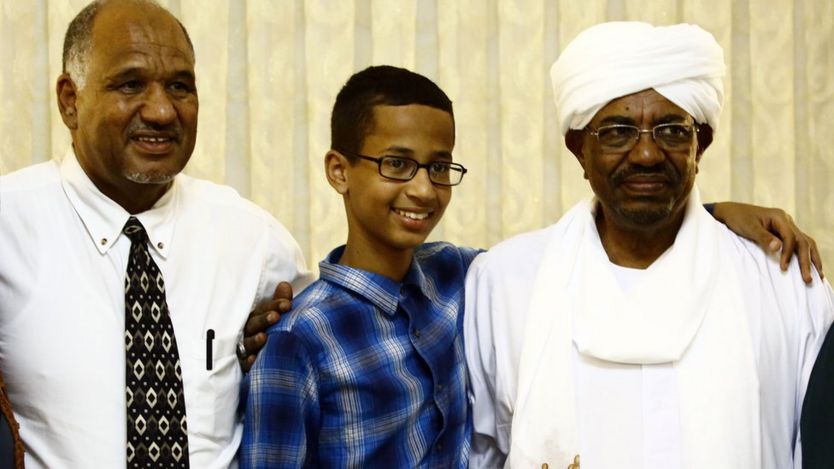 “Photographs of the three smiling, arms around one another, circulated the Internet. Disturbingly, al-Bashir is wanted for war crimes for allegedly ordering the genocide in Darfur that led to the deaths of at least 400,000 people during the last decade.

Ahmed’s father, Mohamed Hassan al-Sufi, has twice run for the presidency of Sudan.”

Ahmed has been tweeting his trip to the Middle East, calling Sudan “home.”

Americas FIRST Muslim President thinks Americans are idiots. So far, he is right.

Pardon me boy, is this the Abu Dabi station? Yes track 29. Do you want a shine?

For a second I thought it said “Mohammed Discusses Bisexual Relations with Obama.” evidence that there is too much LGBT crap in the MSM these days....

US President Barack Obama, The One, Vanquisher of republicans, Abortion in chief, Keeper of HIS laws,
Vacationer in Chief, Supreme social commentator,
Best gun salesman of the year.

I’m sure there are more but you get the drift.