Hillary Clinton's first official foray into the 2016 presidential campaign is raising questions about whether the former first lady, senator and secretary of state can find the same common ground with voters -- and the same success -- her husband did in winning two terms in the White House.

Unlike Bill Clinton, whose ability to convey to individual voters an air of personal concern for the issues that affected them and their families -- a campaign technique referred to as "retailing" -- Hillary Clinton's initial attempt to connect with voters at an Iowa coffee house and her stealth visit to a Chipotle were lampooned on late-night TV and by political analysts as stilted, leaving strategists to wonder whether and how she once again will find her political voice.

It won't be easy.

I’m looking to uncover the most extensive, under-reported news, scandals, and just plain ugly stuff on Hillary as soon as the stuff hits the fan.

Get a ringside seat to the political non-event of the 2016 election season. Sign up by either emailing me or placing your user name in the reply form for the new Hillary Clinton "I'm Melting,I'm Melting" pings list featuring daily articles on Hillary's great political disappearing act.

Hillary dresses like a Romulan from Star Trek so aside from Trekkies who is she trying to connect with?

Malignant arrogance has its own unmistakeable pungence - you can smell it a mile away.

Bought and paid for by Wall Street and spouting socialism. 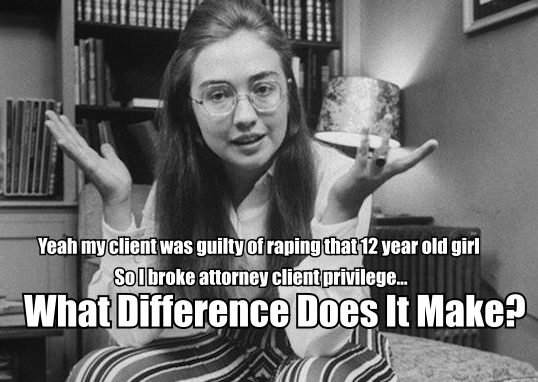 Herself, Madame Benghazi, the Cold & Joyless, has a problem connecting on a personal level with the voting public? How can that be? Doesn’t the world UNDERSTAND the years of strife that Herself has had to deal with? Have they no shred of pity for the privations and prejudice imposed upon Herself by the “good old boys”?

She connects. Here’s why (from a conversation (edited) I had with another Freeper in email on this sort of idiocy ...

Liberals believe that if they say things, and others say things, then those things are true. Thats why a liberal can ignore 18 years of flat temps and say with conviction “Global warming is killing the planet!”

Because they say it is, their friends say it is and that makes it true.

Hillary hates “F’ing Jew Bastards”. Barry the Muslim hates Jews. Ergo Jews are evil. I am shocked that they arent quoting Hitler yet. But it’s ‘true’ because the smartest woman on the planet and black Jesus say it is.

When America waltzed through the middle east with minimal collateral casualty, liberals marched on the Mall. When ISIS does it (with nothing but collateral casualty) there is silence because it’s America thats evil. And it’s evil because TV libs and their teachers from K through PHD taught them the ‘truth’ of it.

It really is that simple. They are medically, clinically insane. Every one. Some more, some less. But there is literal mental insanity there. We collectively say it but few of us actually believe it. I mean BELIEVE it. Because that means that literally half of America (more when you add the GOP liberal types) is certifiable. You cannot hold the views they do, say the things they say, act the way they act with a clinically sane mind. Thats a damn scary thought that most people REFUSE to deal with out of overwhelming fear. For good reason.

(Edit: And look at the comparative population numbers then and now)

A FRACTION of two of the most deadly regimes on earth did what they did. And America is over 60% insane. And those 60 today are FAR more devoted than all but KGB/SS level people of the past. And our SS level libs are every bit the evil of the worst NAZI ever hoped to be.

when she gave that speech today ,it looks like she left her Luggage under her eyes

BOTTOM LINE: Hillary Clinton is old, tired, not in the best of health and soooooooooooo “yesterday”. The 18-25 year old voters today were not even born, or in Kindergarten, when her husband was elected POTUS in 1992. And, a lot of her Fem/Lib supporters are old hags who are dead or have Alzheimers. So, her base has crumbled. She needs to pack it up and go away with Huma and live happily ever after; if it’s even possible for the old witch to be happy.

But the ideology she espouses is more popular than ever. Even if she tanks, her replacement will be even further left.

The territory once known as “the United States of America” needs a better class of voters. Or if we were to follow the rational course of events, the territory should separate into the parts known as the “red” zone and the “blue” zone(s). The “red” zone is nearly contiguous, and probably would not respect current state boundaries in many instances. The “blue” zones (and there would be several) would be much more fragmented, and there is probably little that would unite them at all, much like the West Bank and the Gaza Strip in “Palestine”.

There is a dreadful lack of critical thinking in many parts of the world. And the North American continent has more than its share of the fuzzy pundits.

At this time, I think it’s a very destructive idea to keep America as is. We are polar opposite in all ways to liberals. This is like Israel and Muslims. There is no integrating libs with civilized humans. They need a fenced in pen and reminders to wipe after bowel movements. The smartest thing is to divide the country geographically in half and give people the option to pick where they are going and be governed accordingly.

And thats less a unicorn idea than maintaining a ‘united’ 50 with liberals being what they are.

Very. But I think the facts are there. We gotta deal with them eventually.