An undercover law enforcement officer from an outside agency who was attempting to infiltrate a demonstration against police brutality in Oakland pulled a gun on the protesters after he and his partner were outed and the partner was attacked.

The undercover work — captured by a freelance photographer working for The Chronicle — raised questions about tactics employed by police and protesters as authorities seek to get a handle on rallies that have flooded the streets of Oakland, Berkeley and San Francisco, at times shutting down freeways and devolving into vandalism and looting.

The parts of Oakland I’m familiar with aren’t worth saving.

Back around the time of the March for Justice, they had undercover vans coming to Freeper events in the DC area.

During the Clinton years I’d say they had much, much more interest in us rather than in any hooligan groups.

Your statement is what should be plastered across the web and on signage across the nation. IMO.

probably won’t do anything, but what the heck . . .

It looks like he was “really serious” with the gangsta side aiming technique. For that alone, he should be fired.

6 posted on 12/11/2014 3:03:18 PM PST by rktman (Served in the Navy to protect the rights of those that want to take some of mine away. Odd, eh?)
[ Post Reply | Private Reply | To 1 | View Replies]
To: Blue Jays
Additional follow-up pictures at the SFGate.com link show better firearm discipline than the first "main" pic.
The silly comments section is already absolutely hilarious.

7 posted on 12/11/2014 3:04:26 PM PST by Blue Jays (Rock Hard, Ride Free)
[ Post Reply | Private Reply | To 1 | View Replies]
To: dware
An undercover law enforcement officer from an outside agency who was attempting to infiltrate a demonstration...

Funny. Over at the DUmp, they're all convinced that the most disruptive protestors are really undercover cops.

Gangsta grip and all.

Aren’t these idiots fully on board with the FBI infiltrating the KKK? 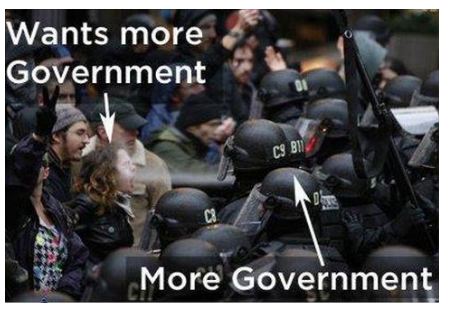 That was the first thing I noticed. The neat, clean, and tidy clothing with regulation hair was the second thing. He's trying to think gangsta but failing at anything beyond his sideways aim.

Since the police were allegedly attacked for no other reason than they are police, the object of the scorn of protestors seems to be rebellion against authority as opposed to police brutality. This is why I suspect that there are professors at Berkeley who were hippie protestors in 1960s, corrections welcome, such professors possibly instigating these protests. “The thought of a business owner with a shotgun, or an angry commuter in a big SUV mowing them down might restore order.”

It amazes me how people have LOST the ‘self-preservation gene’ in just a few short generations.

BUT - all of this stuff happens in ‘Rat OWNED cities and towns, so people truly HAVE lost the will to live, or the smarts to even know that you SHOULD want to stay alive, in those cities and towns. IMHO.

When the rioting breaks out in The Heartland, THEN I’ll worry. ;)